Not to be confused with: Federation, the 1994 event novel by Judith and Garfield Reeves-Stevens

The Enterprise is on its way to the Glorious Pebbles Scientific Academy (a name I’ve always loved) when the USS Alexander falls out of a vortex in pretty bad shape. Its captain, Luke Rayner, warns Kirk that the United Federation of Planets will be destroyed eight days from now and implies that something new will take its place. Unfortunately, he isn’t able to spit anything else out before the Alexander is torn to shreds. The Enterprise traces the Alexander’s course to Espoir Station, and heads to the base to investigate.

Upon reaching the station, depending on the difficulty setting you chose at the beginning, you may or may not encounter Elasi pirates, and if you do, either one or two Elasi frigates will decloak. This is one of only two major space combat sequences in the game. Unlike 25th Anniversary, in which five of the game’s seven missions have mandatory space battles, these can be skipped by choosing the easiest setting without negatively impacting your mission score in any way, though neither one is particularly difficult. (You will never battle Klingons or Romulans unless you go off course on the navigation map.)

In 25th Anniversary, the Elasi pirates were basically old gnomes in classic aviator gear with no recognizably alien features or traits. Here, they seem to be a bit more fully realized, like generic-brand Klingons with a more steampunk aesthetic, with a little bit more edge to their pre-battle banter. 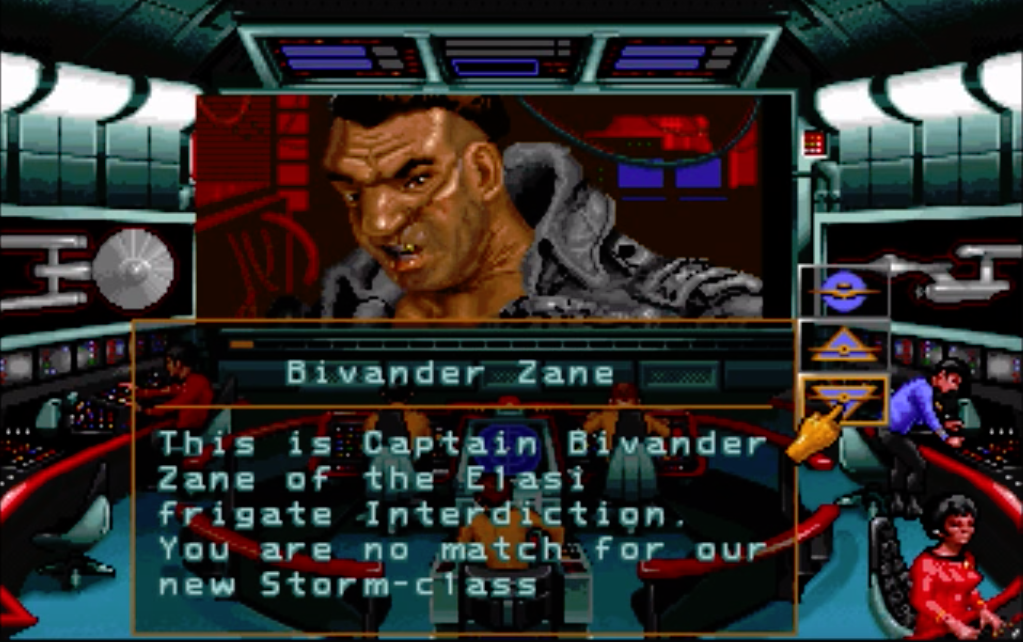 Once you pull up to the station, you speak to Dr. Munroe, who acts like he would be more than happy to have you aboard for a tour. However, once you beam aboard, Munroe immediately dispenses with the make-nice, ensconcing the Enterprise in a lethally overloaded tractor beam and revealing the true head honcho of Espoir Station: Dr. Ies Breddell, a mad scientist from a species of genetically enhanced supermen known as the Vardaine, who looks like an old mining prospector who just threw on a bunch of sci-fi gear he bought at Party City. 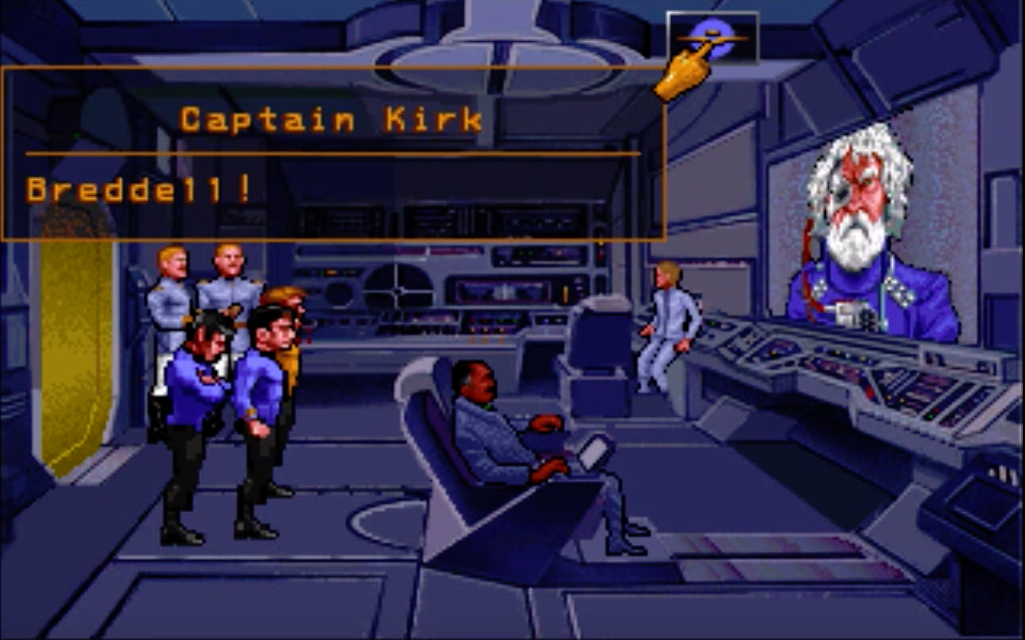 If you’ve played 25th Anniversary, you may remember Breddell as the villain of that game’s final mission, “Vengeance”, where he attempted to duplicate the design of the Constitution-class starship and take over the galaxy with his off-brand knockoffs. “Vengeance” is also known primarily for its legendarily difficult space combat sequence, even compared to the rest of the space combat sequences in that game. So if you choose to interpret 25th Anniversary and Judgment Rites as the fourth and fifth years/seasons of the five-year mission, respectively, then Breddell appears in both the season four finale and the season five premiere. Even TNG never put Q episodes that close together!

Breddell has you thrown in the brig, where you learn why Breddell has such a hate-boner for Kirk (the two of them go all the way back to Kirk’s days on the Farragut) and where you have one of two options: you can either force your way out by having Spock investigate a possible weak spot in the wall, which makes Menao Sheme, the guard on duty, drop the force field and barge in, at which point Spock summarily incapacitates him with a nerve pinch; or you can talk to Menao Sheme, appeal to his father’s legacy, and convince him to help his crewmates foment mutiny against Breddell, a guy no one actually really seems to like all that much. This is the first time, but far from the last, where talking things out represents the superior of two solutions, and it’s these parts of the game that had the most impact on me in the long run during my formative years. 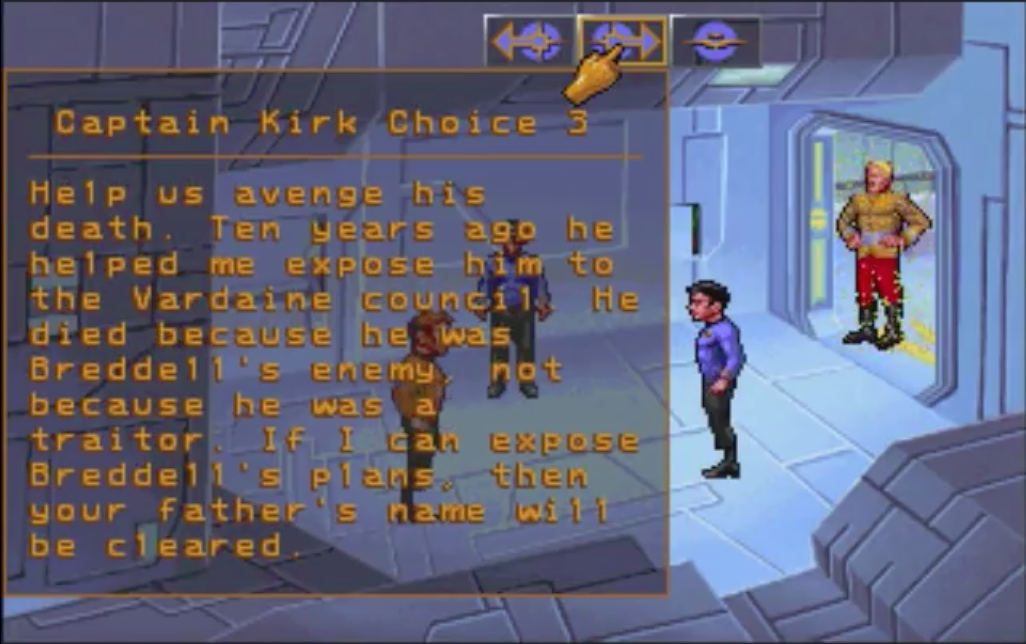 There’s that Kirk-lecturing action we’re all here for

Although “Federation” is a perfectly fine and well-plotted scenario, as a first mission to the game it’s kind of a strange choice—not necessarily because of the aforementioned back-to-back Breddell encounters, but more because it asks the player to do some things that go against good habits of adventure-game exploration. After escaping the brig, you have to sneak around and not attract too much Vardaine attention to yourself, which kind of gets in the way of your ability to tinker—and there are at least a few fun things to tinker with on Espoir Station. It’s not quite stealth, but it comes a tad short of providing the freedom to move at your own pace that most future missions allow you. Additionally, one of the requirements for getting a perfect score in “Federation” is successfully completing the mission on your first attempt1(i.e., from the moment the game boots up), and there’s a lot that can go wrong between viewing Luke Rayner’s message and beaming out of Breddell’s quarters.

But as first missions go, you can’t hardly set the stakes much higher than “saving the universe from a second Big Bang”, and “Federation” does deliver on that front, with a few nice video cutscenes to boot. It’s a rousing, action-packed beginning to our series, and although the next mission doesn’t come close to matching it in terms of urgency and excitement, it does lay down the groundwork of revealing the game’s true nature, which is where things start getting really good.

There won’t be any Final Verdict on the individual missions in the game. I’ll rank the missions from most to least favorite at the end and then render a final verdict for the game as a whole at the end.