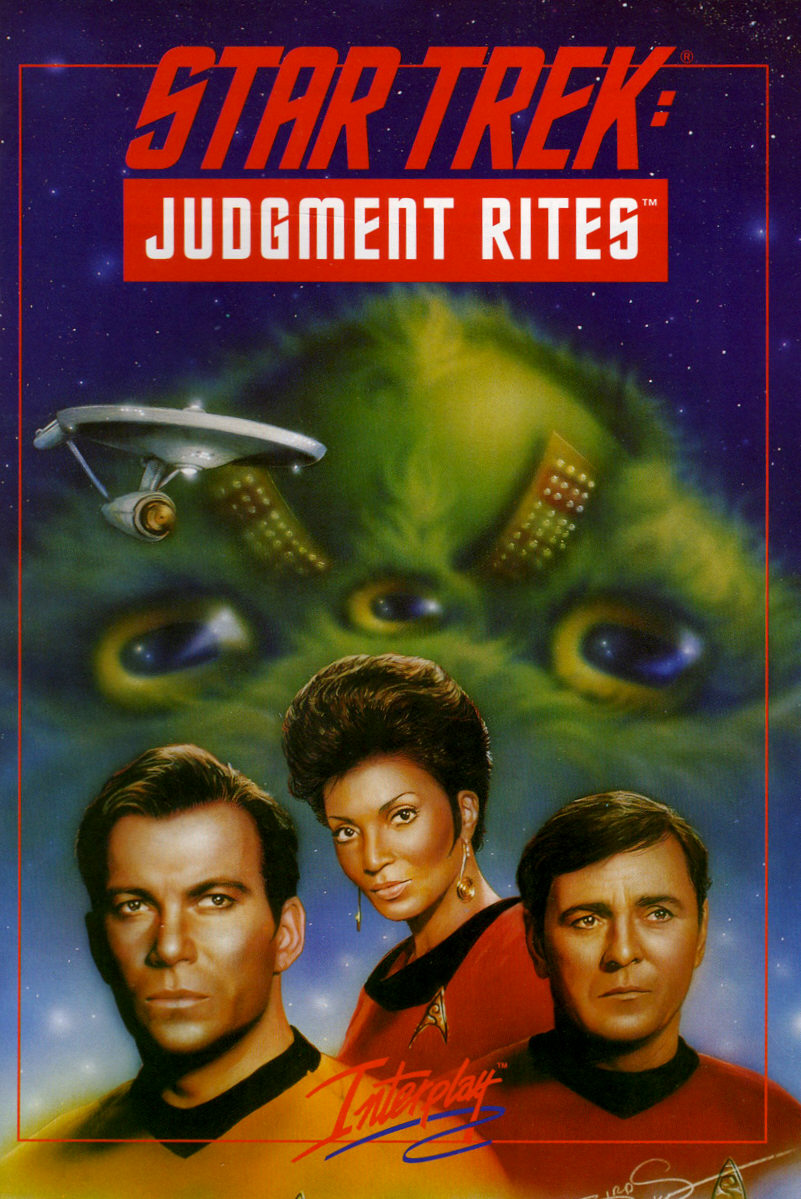 This year, on December 1, Star Trek: Judgment Rites—one of the greatest point-and-click adventure games of that genre’s heyday, and the first extra-canonical Trek work to really grab my attention—turns 25 years old.1Had I gotten the ball rolling on this site a year or two sooner, I could have realized a longstanding childhood dream of celebrating Star Trek: 25th Anniversary on its 25th anniversary. Alas. We’ll probably get to it eventually, though I’m not nearly as big a fan of that game as I am of this one. To this day, it remains one of my top five all-time favorite games, irrespective of genre, and it is simply too important to me to allow the occasion to pass without comment. For each of the next eight Wednesdays, I’ll review one of the game’s eight “episodes”, such that we’ll have the whole game covered right as 2018 comes to a close.

Before we do anything else, let’s get a load of this game’s trailer, which still gives me as many chills as it did over two decades ago:

Now, I think I have always been aware of Star Trek to some extent, but I started really getting into it around the age of 10. In some ways, I was not as deep into Star Trek fandom as I remember being in my childhood, but the reverse is also true. For instance, as I’ve been re-watching Next Generation, I’ve come to realize I had far more of the action figures than I initially remembered, as well as some of the ships (like the Enterprise-D and the Romulan Warbird) and accessories (the phaser, the tricorder, and the transporter). I read a handful of the novels around that time, which I’ve noted as we’ve reached them. I even had a frustratingly complex TOS board game that never got played much, on account of the trivia was too obscure and neither I nor anyone I ever played with knew any of it. But none of them have endured in my mind and heart as much as Judgment Rites.

I was with my dad and grandfather2(maternal) at CompUSA when they bought Judgment Rites in November 1994. When I saw them put it in the cart, they told me it was a Christmas gift for my cousin to deflect my attention away from it. It worked, and I was duly surprised on Christmas Eve when I unwrapped it from a box addressed to me.

For most of the first year that I owned the game, I fumbled with the first episode, not really understanding what the game expected of me or how adventure games worked in general, yet enjoying it all the same, if in a limited fashion. I wasn’t totally unfamiliar with point-and-clicks: I’d played King’s Quest V, but all the headway I’d made had been thanks to the official Sierra hint book, with which I shamelessly plowed blindly forward, paying virtually no attention to how the narrative was playing out. Then, my grandfather3(paternal) had the first of what would come to be many heart attacks, and while my dad was up in Oklahoma City visiting him in the hospital, he bought me the Judgment Rites hint book.4Depending on who’s telling you, my grandfather had between 14 and 18 heart attacks between 1995 and 2014, and that’s just the official count. If you allow a certain margin for untreated, undiagnosed, and flat-out unmentioned cardiac episodes, the number is probably closer to 25. He eventually died of kidney failure. I used it in much the same way, simply inputting the dialogue choices and making the interactions the hint book told me, without actually taking time to comprehend what I was doing.

Later, once the inputs had become muscle memory, I started paying more attention to the writing, and that’s when Judgment Rites really rose in my estimation. It had a quality I had not ever seen in a game to that point: it was thoughtful. To a kid who had solved every problem in a video game up to that point by jumping on it or shooting at it, this was an eye-opening revelation. It’s barely an exaggeration, if one at all, to say that Judgment Rites changed my approach to life. The other games in my personal top five5In no particular order: Lemmings, Donkey Kong (the Game Boy version released in 1994), Super Mario Bros. 3, and Seiken Densetsu 3. are all a ton of fun to play, but Judgment Rites is the only one that really informed at least some of who I went on to be as a person. Plus, without Judgment Rites and the way it stoked my interest in Star Trek things that aren’t TV shows or movies, it’s entirely plausible to extrapolate that without the impact it made on me, there is no Deep Space Spines. So, yeah.

So go ahead and set phasers to fun, because tomorrow, we’ll jump right in with the game’s first episode, “Federation”, where an old mining prospector tries to blow up the universe. Neat!