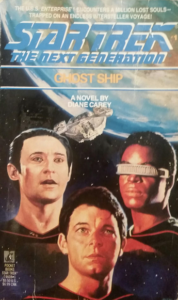 This week brings us, at long last, to our very first all-original Next Generation printed adventure. It’s the mid-90s and the Cold War is still chugging along, but after a giant electromagnetic creature eats a Soviet battleship, the men aboard spend the next four centuries in a cold bore. Four hundred years later, the EMC gets an appetite for starship, and the Enterprise-D has to figure how to talk to it and puzzle out the most humane way to put ghosts down, all while slowly patching up their own still-rocky relationships. Will Data ever get hip to the lingo? What does being a “mind slut” even mean? And just what the heck is Riker’s glitch? It’s the book that spends a full fifteen pages on a discussion of ethical euthanasia.

Oh mama, is there a lot to talk about today, but let’s not get ahead of ourselves right out of the gate. The year is 1995, and the Soviets1The Cold War of course ended in 1991, but it’s easy to see how for someone writing a book even just three years prior, the end probably looked impossibly far away. are testing a heavy-duty new EMP when a much scarier electromagnetic phenomenon consumes them and picks all the meat off the ship’s bones. Four hundred years later, Deanna Troi wakes up in a cold sweat after hearing the Soviet soldiers’ screams in her dreams. Before long, the same creature-mechanism begins targeting the Enterprise, and the crew must figure out how to communicate with both it and the “ghosts” of the soldiers that are flitting in and out of existence before they become its next meal.

Eventually, they learn that the entity absorbed the life essences of the Soviet soldiers and has just kind of kept them not so much alive as continuing to exist, which naturally creates the pickle of how to get them out. Because the entity will find and annihilate them if they use phasers or sensors or anything even remotely loud or detectable, the Enterprise is a sitting duck for most of the book, and so the crew has a lot of time to sit around and wax philosophical about all kinds of problems: the nature of the electromagnetic creature pursuing them, how to try to communicate with it, how to escape from it and keep as many lives intact as possible, and how best to release the Soviets from their hellish fate, including putting them down if necessary. In some ways, Ghost Ship actually presages the conflicts of such far-flung episodes as “Silicon Avatar” and “Ethics”, which both aired in season five, and to boot, Dr. Crusher somehow comes out looking better here than she does in the latter. It’s pretty impressive that such an early TNG work can operate on such a late-season level.

Richard Arnold, a research consultant on Next Generation who assisted Gene Roddenberry by vetting book proposals and manuscripts on his behalf, complains in Voyages of Imagination that Carey was too often prone to taking her stories in a too highly militarized direction, and while I’d concede that’s generally true of her output up to this point, Ghost Ship marks a rather odd and unfortunate time to dredge up that particular criticism, because it’s easily her least military-heavy story to date. And anyway, allegations of hypermilitarism are beside the point because the real Roddenberry-upsetting element here is the fact that these people don’t get along all that great. They still don’t know each other too well, and because they hit the ground running at Farpoint, they’ve kind of fallen into a bad habit of reducing each other to one-dimensional descriptors. If anything makes the book upsetting and uncomfortable, it’s this, not some imagined industrial-military agenda.

Carey also strikes some powerful chords of introspection that are pretty remarkable given the bare-bones sketches of qualities and traits she had to work with. Geordi, for example, is as adamant in his defense of Data as Riker is in his vilification of same, and he harbors some surprisingly strong resentment about always being used for his unique vision capabilities.2Carey also draws some interesting parallels between Data and Geordi as both being machines of a sort. Wesley jury-rigs a gadget that boosts phaser power by hooking up directly to the matter/antimatter reactor, and because this is circa season one, it ends up saving the day—but in a fascinating variation, it has to be adapted to work within the parameters of the Enterprise’s systems, thus demonstrating more overtly than season one usually did that even though Wes is whip-smart, he still has a lot to learn about integrating his ideas into the infrastructure and teamwork dynamic of a starship (especially since if anyone besides Geordi or Data had discovered his experiment, he would have been court-martialed so fast his head would have spun, assuming he didn’t blow everyone up first). Some of it’s not so successful—a passage that reveals Deanna’s acute awareness of the fact that many humans think of her as a “mind slut” is a truly bizarre misfire3I’ve never wished more desperately that I was making something up.—but overall it’s about as impressive as watching a blindfolded amateur make, say, eight out of ten free throws.

In writing Ghost Ship, Carey was saddled with a pretty thankless task. She had to write the book before any of the actors had even been cast, and yet, the book wasn’t even released until after the entire first season had aired, so most if not all of her characterizations were already off base and/or obsolete even by that point. (Great turnaround, Pocket Books!) Having to work exclusively from the series bible explains a lot of the character inconsistencies, especially Riker’s otherwise inexplicable animosity toward Data, which reared its ugly head briefly in Encounter at Farpoint and really comes roaring out in full force here. Whether that makes it easier to grade the book on a curve is up to the individual reader, but if you’re merciful enough, I think it can.

Sure, it’s not all there yet, but even at this early stage, you can see it beginning to congeal into something more recognizably TNG. Picard is rather brusque, though arguably not any more so than was typical of the first season, and his attempt to empathize with the “ghosts” by spending 14 hours in sensory deprivation is really admirable. Tasha is not Lithuanian and Worf cannot just go back home if Starfleet doesn’t work out, for reasons that will become apparent a few seasons down the line, but hyper-focusing on such nitpicks misses the forest for the trees. And Riker and Data, after a noble sacrifice on the part of the latter that stokes a change of heart in the former, are already well on their way to patching things up by the end of the story.

In much the same way that The Entropy Effect bore the responsibility of bringing the original series into the wild frontier of literary adventures, Ghost Ship had to introduce TNG to the same universe, and it had the added burden of cozying readers up to characters that were still very poorly defined even after a whole season. Because Diane Carey was the bestselling Trek author at the time, she got the gig, and I think honestly she did about as good a job as anyone could ask for in that situation. If you can just sort of temporarily put the knowledge of how the details would eventually come together out of your mind, fortify your expectations with enough context, and allow enough leeway for extenuating circumstance, Ghost Ship ends up being really enjoyable more often than not. Yes, there are some mighty embarrassing gaffes here and there, but she truly had no way of knowing. And you get an especially tasty flavor of the philosophical working through a problem that makes Star Trek so great, so what’s so bad about that?

I give Ghost Ship 3.5 out of 5 sensory deprivation chambers. That may seem high for such a routinely out-of-character book, but if you ignore nitpicks such as Data using contractions so often and give Carey the benefit of the doubt based on the circumstances she was writing under, you come out with honestly a pretty cool story that has an intriguing premise and an unnervingly inscrutable antagonist and regularly waxes philosophical in that inimitable Star Trek way. I’d take it over most of season one, to tell the truth. A solid effort, considering.

1-Year Fundraiser and Some Other Upcoming Stuff