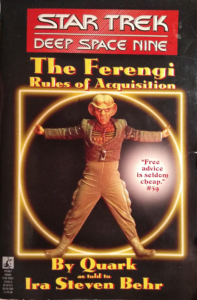 This week, Quark overcomes the considerable handicap of being a fictional character to bring the accumulated wisdom of his species (or at least a fraction of it) to our bookshelves. But it remains to be seen whether this light sampling of alien aphorisms is worth the latinum. Do the Rules hit different in a book? Is “sexual icon” a value judgment one can make about oneself? And what does Forrest Gump have to do with any of this? All this and more in The Ferengi Rules of Acquisition, coming soon to a theater near you!

The Ferengi walked a long, tough road to respectability. Once poised to become the third major villain species of the series along with the Romulans and Klingons, they instead became a laughingstock, an instantly identifiable signifier of low stakes and a fundamentally unserious threat. By the end of The Next Generation‘s run, even children could capably neutralize them. Their own incompetence did them in pretty well, but once the Borg showed up, that was pretty much the end of any chance the Ferengi had of being a legitimately fearsome entity.

But then along came Deep Space Nine, and much like the unpopular high school student who starts college in a new state, the Ferengi suddenly had a golden (gold-pressed?) opportunity to rehabilitate their image. The Ferengi of TNG are largely pirates, scavengers, and rank thieves, but DS9 contemplates their place in the galactic community and the purpose they serve within it. We know that they value profit above all else, of course, but it isn’t until DS9 that we learn how that makes them tick, how it informs their society and gives rise to concepts like the Grand Nagus, the FCA, and the tenets that fill the very book we’re looking at this week, The Ferengi Rules of Acquisition.

Canonically, there are two hundred eighty-five Rules of Acquisition, about seventy of which comprise the contents of this tiny little chapbook. Some come directly from the show, while others are original creations for the book. It’s peppered with black-and-white stills from various Quark- and Ferengi-centric episodes. There’s a little bit of light reading at the front, a foreword written in character as Quark that’s good for a few chuckles. In the back are a few blank spaces to write in any new Rules that happen to be drafted after the book is published, though Quark is quick to note that that doesn’t prevent you from having to buy any new editions that come out later.

It’s good for a few gentle chortles, but this is hardly an essential volume. Only truly hardcore completionists need apply. I will say that it does feel a little different reading them in a book as opposed to hearing them on television. The Rules of Acquisition are amusing and tolerable because there’s always a pompous self-seriousness buoying their recitation. Without that line reading, some of them just feel like gross things capitalists would say with a straight face, like e.g. #41 (“Profit is its own reward”), #181 (“Not even dishonesty can tarnish the shine of profit”), or #202 (“The justification for profit is profit”). It’s maybe not so surprising that these examples are all book originals; they just don’t have the punch of the canonical ones, and feel a little greasy besides. I can imagine a little too easily putting some of these out there without their Ferengi context and finding someone who flat-out agrees with them.

For the most part, that’s about it. But I do have a few ruminations on the book’s nature and a little bit of speculation about why it exists, if you’ll indulge a little padding.

The Ferengi Rules of Acquisition is, as I see it, a relic of a transitional period, when there was Some Internet floating around out there, definitely on people’s radar but not yet a fixture in our daily lives,1There was a mystical aura surrounding the handful of people I knew who had Prodigy. but not enough that books like this were a complete waste of money. No one really needs something like this today; nowadays, you just gather up all the known Rules and throw them up on Memory Beta and that’s that. It’s the kind of thing I would have spent money on as a kid. It reminds me that I once owned a collection of Jeff Foxworthy “You might be a redneck if…” jokes. It also calls to mind a particular book of David Letterman top ten lists, which my friends and I crowded around at lunch, laughing at jokes about John Sununu that we didn’t understand, and which somehow became a bizarrely perennial fixture of school book fairs.

As to its origin, I have an idea about that. A little less than a year before the Rules came out, Pocket Books published a book called Gumpisms: The Wit and Wisdom of Forrest Gump, to tie in to the movie. This is pretty much exactly what it sounds like: trite little “inspirational” one-liners written in the homespun, folksy style of Forrest Gump. If I had to speculate about the elevator pitch, I’d guess that Ira Steven Behr walked in and said, “What if we do Gumpisms, but Star Trek?” The Ferengi Rules of Acquisition, then, probably isn’t much more than the Trekification of Gumpisms, which is fine by me. I’d much rather read this than anything Gump-related, that’s for sure.

Average. Not much to it. Just a little curio I wanted to take a look at. Its existence isn’t offensive, but neither is it a quintessential piece of a Trek reader’s collection. It’s just kind of there. We’ll get back to novels next week.

NEXT TIME: Everybody walks the dinosaur in First Frontier