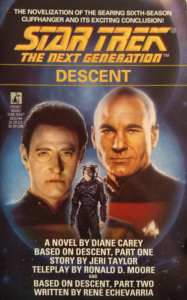 This week, when Data turns heel during an encounter with the Borg, the experience leaves him shook. But when his brother comes calling with a job offer, he finds it’s one he literally can’t refuse. Now his friends have to drag him back to reality before the Sons of Soong can roll out Wolf 359 II: Cybernetic Boogaloo. Is Barnaby any less annoying in the book? Will Isaac Newton ever figure the holodeck situation out? How does one master the arcane feline arts? All this and more in Descent, the book that oozes boredom.

With only a couple major exceptions, Star Trek: The Next Generation generally had trouble sticking the landing when it came to season finales. “Descent”, the two-parter that ended season six and began season seven, isn’t one of those two exceptions, though I would call it the best of the rest. Lots of key series elements converge into one single, distinctive, and pretty cool story. It’s an episode marked by multiple crises of identity in which emotions run high and mettle is tested. It isn’t one of my favorites, but I dig it.

“Descent” is solid, yet it doesn’t quite feel like the sort of event that needs an accompanying novelization—though, to be fair, I’d have said much the same of Relics before reading that, and look how pleasantly wrong I was about that. Unlike Relics, unfortunately, Descent doesn’t flip that suspicion on end. Being a two-parter, it doesn’t require much padding to get it up to the usual Pocket Books page count, and Diane Carey, the novelization’s author, clings to that bare minimum of effort like it’s going to run away.

In case the gist of the episode escapes you at the moment, this is the one where the Enterprise once more encounters the Borg only to find them behaving erratically and individualistically, and in the ensuing skirmish Data becomes consumed by anger and chokes out a Borg. While trying to scientifically recreate the sensation in the days afterward, Data continues to feel the emotional pull, and eventually flees the ship with a captured Borg drone. It’s discovered that his brother Lore is now leading the Borg, whom he found contending with the turmoil brought on by the reintroduction of Hugh into the collective. Lore galvanizes the shiftless Borg into a unit with purpose—that being to destroy the Federation with his brother reigning with him at his side. With the planetside search for Data requiring all hands, Picard leaves Dr. Crusher in command to deal with matters in orbit.

Descent is the second consecutive Trek novel written by Diane Carey, and well, it’s pretty obvious which of the two held her interest more. Her only other TNG credit thus far is on Ghost Ship, the infamously janky first numbered installment. Even if that book hadn’t been hampered by its adherence (out of necessity, mind you) to the oddities of the series bible and by editorial friction, it’s clear she prefers playing in the TOS sandbox. The comparatively strait-laced TNG doesn’t provide near the amount of wiggle room for her style that the original series does, and she wears her distaste for this fact on her literary sleeve.

As much as I bust on Carey for being a bit of a chud, The Great Starship Race is fun, lively, and recommendable, three things Descent is not. I think that, beyond any preference for one series over the other, the core problem here is that she is simply not terribly enthralled with the material. Her boredom radiates through the page with shocking intensity; never has she turned in such lifeless prose. The only time she shows any hint of enthusiasm, unsurprisingly, is in the two scenes (one of them a new addition) with Data’s historical poker buddies. She’s especially enamored of holo-Isaac Newton, to whom she imparts a nascent awareness that there is something fishy about his presence, though he’s nowhere near as quick on the uptake as Moriarty.

As I said earlier, “Descent” isn’t a Pantheon-level episode, but it entertains. We’ve seen before, though, that that doesn’t preclude the possibility of making for a great novel. To bring it back around to “Relics”, that’s an episode I’d say inhabits the same “pretty good, maybe not great exactly” stratum as “Descent”. But Michael Jan Friedman was able to elevate the material using a strong personal connection to both the episode and the character of Scotty. I suspect that the pairing of author and episode happened to be more serendipitous than planned, but it’s an idea they should have worked harder to replicate with consistency, not to mention one that might have helped salvage this book.

I have to confess that I didn’t do my usual due diligence by rewatching the episode before reading the novel, but I’m not sure I needed to. Descent is a purely perfunctory product. It’s not even one that fills a gaping hole in the release schedule; there’s already a far better novel by the same person doing that. I don’t want to be overly catty and say this was nothing more than a paycheck for Carey, but it’s hard to imagine it being much else. This bland stack of dead trees won’t do a dang thing for anyone, and is easily the least essential novelization this project has covered to date.

I strongly do not recommend Descent. It does go by mercifully quickly, but there is no clear advantage to reading it over rewatching the episode. It’s clear from the timbre of the writing that Carey has no enthusiasm for or interest in this episode’s story and is merely pumping out pure product. Such material should be studiously avoided, both in terms of creation and consumption.

NEXT TIME: Worf once again plays peacemaker in Line of Fire

State of the Spines: February 2020