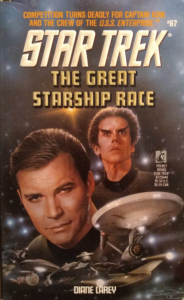 This week, a race of anime-eyes people learn they’re not alone in the galaxy and hold a race to their planet to celebrate. But when a Romulan ship enters the contest, its commander is determined not to fall for those puppy-dog eyes a second time. How fair is it to make things fair? Are the Romulans sitting on some primo blindness-curing tech? And who honestly thinks the South will rise again? All this and more in The Great Starship Race, the book that’s part of a complete down-home breakfast.

The people of the planet Gullrey are sponsoring a starship race, their first gesture of goodwill to the greater galaxy since the USS Hood made first contact twelve years prior. The Rey’s event draws contenders from all over the Alpha Quadrant, including the Enterprise and a handful of other Constitution-class ships. Some civilians are salty that Starfleet gets to participate, but the Starfleet crews agree to run at 80 percent of full power and have some of their more advantageous accoutrements removed, a show of good sport that will definitely at no point bite them in their butts.

When the Romulans show up wanting to play, Kirk gets cheesed at the race committee for not taking a firmer stand against them and demands to meet their commander. Said commander is one Valdus, the lone survivor of a disastrous encounter with the Rey nearly three-quarters of a century before. The Rey boarded the Romulan vessel, and at first everything seemed hunky-dory, even weirdly joyful. But a communication breakdown caused frustration to set in, and violence soon erupted. Valdus escaped and destroyed the ship in his wake. Hailed as a hero but burdened with the true knowledge of the circumstances, Valdus now seeks to confirm that the Rey are the selfsame species he met in his youth—and vows to destroy them before the Federation can weaponize their terrible secret and bring the full force of it to bear against the Romulan Empire.

Debate has long raged over the true extent of the military nature of Starfleet, and no one is a bigger proponent of that point of view than Diane Carey. Rare is the opportunity to flex her history-buff muscles that she takes a pass on. The Great Starship Race is no exception, inspired as it was by a trip to the Great Chesapeake Bay Schooner Race in Baltimore, as well as more generally by her love, experience, and encyclopedic knowledge of sailing. But the thing about military history is it’s one of those things where you have to keep people who are a little too into it at arm’s length. And Diane Carey is one of those people.

The writer Diane Carey most resembles, as I see it, is Peter David, in the sense that both are authors who possess massive reserves of pure, raw talent, but have unfortunate tendencies that regularly undermine that talent and threaten to derail otherwise outstanding novels. In PAD’s case, it’s usually the sex stuff. I’ll take that eight days a week, however, over the hole Carey digs for herself, which typically is to endorse something that either makes her and her characters sound like pipe-smoking Ward Cleavers or is otherwise politically problematic. This book suffers from the latter by expecting the reader to feel bad for a character who deserves far less sympathy than the actual antagonist. More on that—much more—later.

Let’s try to focus on the good qualities, which are … well, everything else, really. The race itself is a great concept, and not just because it’s loads of fun; it’s easy to pile up the exploits of the Enterprise and take them at face value, but pitting it against other ships really brings into sharp relief why it’s the best of the best. There’s lots of excellently written camaraderie, particularly among Starfleet officers, and Carey can write an assembly scene with an effortlessness that frankly makes me jealous. Valdus and his subcommander Romar rank among the best Romulans in a novel to date, earning sympathy even as they make strides toward their ultimate goal of Rey genocide.

This is a real romp of a book—lots of exciting action setpieces, cracking dialogue, and good old-fashioned fun. Sometimes it can get a little too old-fashioned, but it’s hardly any reason to write off a story that does so many other things right. It seems like Carey had a lot of fun with this one, and that’s when she’s at her best; not when she’s trying to lecture readers or impress them with obscure nautical jargon, but when she’s just plain having fun.

I recommend The Great Starship Race. I can’t even with characters who rock the rebel flag in the 23rd century, much less today, but aside from that blemish, The Great Starship Race is both a lot of fun and an inspired use of Diane Carey’s peccadilloes and proclivities. The pages go by quickly for the most part, with exciting action setpieces and the brisk camaraderie of friends and line officers pushing things along at a nice clip. I didn’t talk about the Rey much, but they’re an interesting species as well, even if their overwhelming desire to be just like their best buddy Earth reeks strongly of wish fulfillment. As more action-oriented Trek goes, it does rank among the better efforts.

NEXT TIME: Hate leads Data to the dark side in Descent