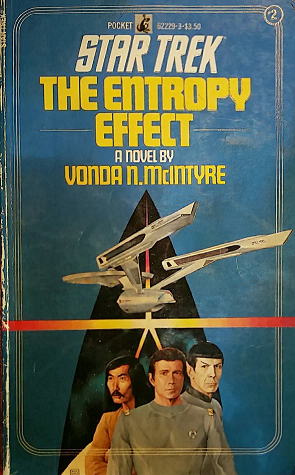 There are some episodes of Star Trek where Kirk rekindles a relationship with an old flame. There are other episodes where the crew meets a once-respected hero or mentor figure, only to realize that person has gone completely cuckoo for Cocoa Puffs. And there are still other episodes where they’re burdened with a civilian who snoops around and asks too many questions and throws their weight around and is totally overwhelming and annoying and in the way all the time.

The Entropy Effect contains all of those tropes, plus time travel.

It took a whopping 18 months for Pocket Books to crank out a follow-up to the novelization of The Motion Picture, but they finally delivered in the summer of 1981 with Vonda McIntyre’s The Entropy Effect. As the imprint’s first all-original tale, The Entropy Effect bears the unenviable burden of setting the bar and establishing the stakes for the Pocket Books novel universe. The good news is, it succeeds. The bad news is, it succeeds so spectacularly that most of the stories in its immediate wake will struggle to match its quality.

We open with Spock observing a phenomenon known as a naked singularity. He’s done some Vulcan voodoo to keep himself awake and working for six weeks straight while everyone else sits around bored because he’s the only one qualified to gather data. Sulu, for his part, occupies his time with chief of security Mandala Flynn, teaching her fencing in exchange for judo lessons. It’s pretty obvious they’d like to observe each other’s naked singularities, if you catch my meaning, but Sulu’s sending mixed signals because he’s considering a transfer to diversify his service record and he doesn’t want to hurt Flynn’s feelings by hitting it and quitting it.

The singularity fluctuates and sends the Enterprise flying, thus taking a steaming dump on all of Spock’s hard work, but if his preliminary conclusion is accurate, it’s bad news bears for the whole galaxy: namely, entropy is accelerating so quickly that the universe has only about a century of existence remaining. About that time, Kirk receives an ultimate override signal so top-secret he’s only allowed to decode it with paper and pencil, and the Enterprise has to maintain radio silence effective immediately until they reach their destination, mining colony Aleph Prime.

The signal originated from the office of a lawyer named Ian Braithewaite. He swears up and down he didn’t send it, but hey, as long as you’re in the neighborhood, will you transport this prisoner from a case I just finished to a nearby rehabilitation colony? Kirk is royally pissed that an ultimate override code was issued for something so trivial and beneath a ship of the line’s duties, but upon learning the name of the prisoner—Dr. Georges Mordreaux, a brilliant temporal physicist Spock once studied under, now accused of unethical experiments on live (i.e., human) subjects—Spock has a hunch and suggests “hey, we should probably do this, actually” and Kirk is all “ugh, fine, whatever”. It’s nice that Kirk trusts Spock’s judgment so much, because Spock is going to be making some hefty withdrawals from the Bank of Crew Members’ Trust in this book, and he’s going to write some checks that even his formidable Vulcan butt will have trouble cashing.

Spock finds it highly unlikely that someone he once respected and admired so much could become an insane homicidal mad scientist. (Actually, it’s a little weird that he gets so blindsided by it, because it’s not like the Enterprise crew has any shortage of prior experience with this sort of thing: there’s Richard Daystrom, Garth of Izar, and Roger Korby, just to name a few.) But if he didn’t think Mordreaux was crazy before, he probably figured it out right around the time Mordreaux somehow escaped from his cabin, made it to the bridge, and shot and killed Kirk.

Yes, you read that right: Kirk totally eats it in this book. This could easily come off as a real tryhard move that leans too hard into a “this ain’t yer daddy’s Star Trek” attitude, but they don’t gloss over it; his death throes alone last four whole pages (and in smaller print than what would eventually become the norm for these books, to boot), and the reader feels the loss as acutely as the crew does. McIntyre proves her aptitude for navigating this balance throughout the book by replicating the same successful results with other ideas again and again.

As I mentioned in the teaser paragraph, a lot of standard Trek tropes are crammed into this single story, but McIntyre is careful to not simply play any of them totally straight. They’re all deconstructed in some nifty way. Sulu’s subplot in particular is quite interesting, giving well-honed scrutiny to how a character in his position would navigate the corporate hierarchy, what he might feel would be expected of him versus what he’s accomplished, and wracking him with poignantly rendered self-doubt while giving him an excellent foil (in Mandala Flynn) who doesn’t allow him to wallow. Kirk tries to re-ignite a relationship with an old flame, Captain Hunter of the fighter ship Aerfen, but realizes his immaturity and choices in the past have strained the possibility of even a simple friendship in the present. Ian Braithewaite is a nosy blowhard like every civilian and admiral they ever had to schlep somewhere, but he’s also an active and very real threat to Spock’s mission, and though he comes off twerpy, he’s well within his bounds to be investigating and challenging activities that are not completely above the table. Mordreaux’s future darkest-timeline self is clearly way too far gone to negotiate with, but in the past is reasonable enough for Spock to convince him that his initial compromise with him (i.e., to fix the timeline while not destroying his work) isn’t going to cut the mustard.

And, like all good time travel stories, The Entropy Effect acknowledges the messiness of time travel. Take, for contrast, an episode like “Assignment: Earth”, where the crew slingshots back to the 60s to set things right, but for the most part they clumsily sneak around and hang out in the green room having a smoke while Robert Lansing and Teri Garr film a backdoor pilot, and everything wraps up nicely in an hour, as is television’s way. In The Entropy Effect, however, Spock repeatedly fails in his efforts to repair the timeline and make sure Kirk doesn’t die, and each failure causes more chaos. In the end, he does get back to a timeline where everything seems more or less okay, but the story explicitly acknowledges that Spock didn’t really fix anything—he sort of just has to hope on a wing and a prayer that his Band-Aids hold. The story resolves, but the sense of unease never subsides; the knot in the stomach never fully unties itself.

But hey, if no one’s the wiser, what’s the harm? When Kirk presses for an explanation after all is said and done, Spock literally pulls a Bartleby the Scrivener on him, to which Kirk shows no objection. Everyone gets field promotions, commendations, and transfers to other departments, and the Enterprise jets off to another wacky mission.

Loads of great original characters, interesting subversions of venerable Trek tropes, and deft handling all come together to make this a rousing debut for the series’s original stories and set a high standard for future adventures. Recommended.

NEXT TIME: The Klingon Gambit