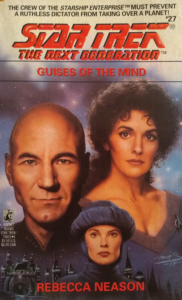 This week, en route to Capulon IV, Troi helps a telepathic nun learn how to put up some barriers. But when the king’s shady behavior necessitates an accelerated itinerary, they suddenly have to cram for a final they thought was still a few weeks away. And when they’re drugged and imprisoned, they’ll need a Hail Mary to prevent an imposter from seizing the throne. Will Data solve religion? Am I seeing phantom anagrams? Is this Guinan’s worst advice ever? All this and more in Guises of the Mind, the book that truly has faith of the heart.

Star Trek‘s general outlook on religion tends to fall slightly to one side of the middle or the other, never quite right on. Most commonly it’s a begrudging tolerance, occasionally an acute respect—the obvious (and proper) exception being when it impinges on the rights of others. The books, on the whole, have been a little kinder about it, often offering swift yet gentle reproof to any character that callously dismisses it entirely out of hand. Edgelord atheism isn’t non-existent, but as someone who finds merit in and practices Christianity, I’ve appreciated the franchise’s relative lack thereof. Guises of the Mind, however, may very well be the first published piece of Star Trek media with a significantly Judeo-Christian bent.

Picard is pleased as punch to be hosting representatives of the Little Mothers, a religious order that takes in society’s castoffs from all over the galaxy. They and the Enterprise are headed to Capulon IV, where the Mothers will help Joakal, the planet’s soon-to-be Absolute (italics are the book’s, not mine), usher in a new era of social reform. Of the two delegates, Sister Julian is animated and talkative, but Mother Veronica is withdrawn. Counselor Troi realizes Veronica is a telepath who has never developed any mental shields. She offers to help, but Veronica refuses.

Meanwhile, trouble brews on Capulon IV as Joakal is attacked by his doppelganger. The lookalike is a twin brother Joakal never knew he had named Beahoram. Beahoram is by Capulonii definition an “abnormality”, satisfying the condition twice over as both a twin and as someone with mind powers. Abnormalities are normally euthanized whenever their nature or disability becomes apparent, but a sympathetic guard instead secretly sent him to live far away. Growing up with the knowledge that his brother enjoyed a life of royalty while he languished in exile, Beahoram is consumed by resentment and anger, and plans to assume Joakal’s identity, usurp the throne he feels he deserves, and use his mental abilities to strip Joakal’s mind until he becomes a vegetable.

Back on the Enterprise, Deanna’s progress with Veronica moves forward in baby steps, and is slowed further by a childhood trauma Veronica needs to work through. When the Enterprise contacts Capulon IV, Joakal’s (i.e., Beahoram’s) sketchy behavior leads Picard to bump their arrival up from a couple of weeks to a couple of days. Once there, Troi, Picard, and Veronica beam down for a meeting. Their meals are drugged, and the three are tossed in a cell with Joakal. To have any hope of success, they’ll need to rely on Elana, Joakal’s betrothed who also smells something fishy, and hope she can get the message to the right people before Beahoram completes the coronation and becomes the Absolute.

It’s amusingly apropos that a book with such a strong religious component took a Christ-like amount of patience to get published. Guises of the Mind began in 1985 as a TOS story called The Gift of Silence, and went through almost eight years of requested changes, rejections, and re-call-ups before reaching shelves in its finalized form. That road to publication is too long and meandering to recount specific details here, although it is one of the more interesting entries in Voyages of Imagination. Neason’s patience and positive outlook certainly deserve plaudits; several authors walked away with far more bitter memories after much less editorial runaround. But is the book’s victorious publication after nearly a decade of travails a sign from God—or a deal with the devil?

Though it’s easy to tell Neason was devout, it’s clear she took great pains to avoid being preachy, at which I’d say she succeeded overall. There’s a thing that religious people often do, however, where when they step onto science-positive turf, they work so hard to be reasonable and not rock the boat that they sometimes wind up hedging on their position in a way that doesn’t always look so great in hindsight. I’ve done this several times myself trying to look like a “cool Christian”, and it happens a couple times here as well. Religion, particularly that of the Christian persuasion, demands a certain amount of transparency and vocal commitment, and while having your nun characters say things like (paraphrasing here) “we’ve learned to keep religion a matter of the heart” will certainly win you a handful of points with a secular crowd, there are ways to hold a confident stance without sounding loony that Neason didn’t manage to hit upon here.

In terms of the more regular programming, Guises is a serviceable book. Deanna gets an arc that makes better use of her talents than usual, and it feels to me like Picard, taking the role of deuteragonist, gets more of actual import to do in this book than he has in a hot minute. One big complaint is that Beahoram turns out to be a fairly lame villain; I was honestly hoping for a bit more of a climactic telepathic showdown, maybe with a villain not quite as psychically powerful as, say, Zakal from The Lost Years; but when the rubber hits the road, Beahoram folds distressingly easily.

I’m really curious about Rebecca Neason’s background, but unfortunately, there isn’t much information about her out there, and at this point few if any new and/or revelatory facts are liable to surface.1Neason died in 2010 of complications from fibromyalgia. Even though it took ages to achieve publication, I’m glad it did, because it brought a subject to the foreground that rarely gets more than a passing glance in Star Trek. It might not be everyone’s cup of tea, and it’s certainly not going to blow anyone’s mind, but it deserves a touch of recognition for bringing something at least slightly unique to the table.

I just barely recommend Guises of the Mind, though not without a few caveats. It’s right on the edge of what I would consider recommendable. Depending on your tolerance for religion and discussions thereof, you might despise this book, or you might get something out of it that you wouldn’t expect to normally get out of a Star Trek novel. Outside of that, it’s a serviceable adventure with some decent action and some good character work for Counselor Troi and Captain Picard. Definitely not a must-read, but a choice off the beaten path if you’re looking for something that checks some unusual boxes.

NEXT TIME: Ladies and gentlemen, start your engines for The Great Starship Race