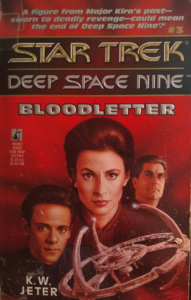 This week, Sisko and the Cardassians race to build a truck stop on the other side of the highway. Meanwhile, Kira finds herself in the crosshairs when she learns her favorite podcast host is no great fan of her work. Will Sisko ever trust Kira’s hiring decisions again? What’s the rudest thing to do in Odo’s bucket? And where the heck is Dax? All this and more in Bloodletter, the book where math is power.

Tensions are—naturally, considering it’s still early season one—running high on Deep Space Nine. The Cardassians accuse Starfleet of sabotage, but Odo sniffs out an attempt to sneak a warship through the wormhole using some fuzzy math. Elsewhere, Sisko suspects Kira may harbor lingering extremist sympathies due to her hiring of a group of Bajoran dock workers affiliated with the Redemptorists, a fanatical religious sect opposed to Kai Opaka’s alleged “mainstreaming” of their faith.

Ordered by Dr. Bashir to relax, Kira winds down with old broadcasts of Redemptorist pirate radio—unaware that as she relives the good old days, the very leader of the movement himself, Hören Rygis, is holed up in an isolated section of the station recording his latest missive. And she probably isn’t going to like this one so much: in it, Hören names Kira as the next target of Redemptorist assassination.

Meanwhile, the espionage efforts of Odo and Chief O’Brien reveal that the Cardassians seek to build a station on the other side of the wormhole in order to control who exits it, thus presumably quashing Bajor’s newfound popularity, causing their economy to crumble, and coercing the Federation into withdrawing their support. Seeing the need to arrive first, Sisko yoinks a quarantine module Bashir’s been working on to hold themselves a spot, and it’s off to the races. Bashir challenges Sisko’s authority to take his module; Sisko compromises by letting him join Kira, originally the only crew member slated to go, as a “scientific observer”. The Redemptorist workers sabotage the impulse buffers1Originally, according to the series bible, it was imagined that using impulse engines inside the wormhole would injure its inhabitants, and a special set of buffers would prevent that damage, thus allowing safe passage. However, this concept never made it into the show. on the shuttle towing the module and sneak Hören aboard, and once inside the wormhole, the plan is enacted. The resulting chaos leaves Bashir stranded in the wormhole and Kira alone with her assassin thousands of light years away from the Alpha Quadrant.

Where its immediate predecessor was wilder and more prone to flights of fancy (some of them literal), Bloodletter feels much more like a regular episode. Occasionally this comes as a relief—e.g., Odo’s more prosaic uses for his shapeshifting feel more “right”. But there’s another side to that coin, which is to say, for most of the duration of Bloodletter, I was actually fairly bored, something The Siege was never guilty of even in its lowest moments. The most enjoyable and engaging parts are those in which Bashir talks to the wormhole aliens; in hindsight, it’s easy to see how a writer would get the impression that direct contact with the wormhole aliens was going to be much more of a Thing. But the rest of the story operates, even at times that are supposed to be suspenseful, at a low simmer that fails to generate sustained interest.

I also question the wisdom of casting a Bajoran as such a broad villain. While it’s true that Deep Space Nine blurred the lines between right and wrong with more gusto than had been typical of Star Trek to that point, this seems wildly off base and maybe even a touch irresponsible when you consider that you have literal space Nazis right there at your creative disposal. I’m hardly one to crow “too soon”, but considering there are Bajorans who remember the Cardassian occupation that still haven’t been toilet-trained, there could hardly be a less compelling question than, “Sure, but there are probably some pretty awful Bajorans too, right?”

And of course, this being an early novel from a new series, it’s always fun to see if the author’s take on the characters’ personalities managed to hold up. I’d say Jeter got Kira, O’Brien, and Bashir down pretty well, especially the relentless sleaziness that characterized the latter early on. Sisko seems to constantly be in chessmaster mode, five steps ahead of any given person at any given point. Odo, I feel, comes off as being a little too okay with being underhanded as long as it serves justice—not that he would never be, particularly in an appropriately extenuating circumstance, but he’s a bit less hard-Azorius than how I normally perceive him. He also talks too much. “Pontificates” is more like it; he’s far too pleased with his own intelligence. Quark and Dax barely appear at all; the former mostly just stays out of the way, but Dax feels like Jeter forgot about her entirely and they had to shoehorn her in a couple days before the book went to press. She’s a total cardboard cutout, receiving only the most perfunctory dialogue and never once calling Sisko “Benjamin”. I’d have preferred a total absence with no explanation to what we actually got.

All in all, Bloodletter fails to pass muster, but it’s still early in the run, so I’m not disheartened. After all, The Next Generation took ten books to crank out one I would call good without caveats. I did like it a little more than The Siege; as I’ve said in the past, I personally would rather be bored than insulted. But, more to the point, I would of course rather be entertained than bored, and that didn’t happen this week.

Raise a glass this week for Arten, the fresh-faced young Redemptorist who is killed by Hören and his cadre for the unforgivable crime of [checks notes] … liking Chief O’Brien? I’m not sure how this sweet summer child got mixed up in this wackadoo cult business, but it’s a shame he had to pay for it with his life.

I do not recommend Bloodletter. Most of its problem is that it’s simply boring, but I also found its interest in villainous Bajorans unseemly and beside the point. There are many more worthwhile avenues to explore at this point in the series than to try to make evil masterminds of the people who just got done being occupied by literal space Nazis. Not a great look.

NEXT TIME: Deanna Troi is nun the wiser in Guises of the Mind