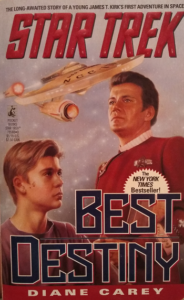 This week, when George Kirk struggles to straighten out his wayward progeny, the boy’s mother suggests a Take Your Son to Space Work Day. But when their shuttle gets waylaid by pirates en route to a ceremony, young James sees a new side of his father and learns that duty can sometimes literally cost an arm and a leg. Will James Kirk give in to the boomer side? What’s the point of campfire stories that aren’t scary? And what’s the deal with Sanskrit on Mars? All this and more in the positively foudroyant Best Destiny.

Literally minutes after the Federation president congratulates Kirk on the events of The Undiscovered Country, a distress call comes in from the Bill of Rights. Readings in the ship’s vicinity show signs of antiproton flushback, an explosive phenomenon known only to occur in warp nacelles. The only other object in the neighborhood is a cold, lifeless ball of rock called Faramond, a name that stokes the fires of Kirk’s memory…

We then travel back in time 45 years and drop in on a younger James Kirk going by Jimmy. To say he’s rougher around the edges would be a massive understatement. When we meet him, he’s leading a ragtag band of misfits across dangerous terrain with the goal of running away to South America to get some sun, work some odd jobs, and watch the toilets flush counterclockwise. They get as far as stowing away on a boat in the Pacific—farther than I’d get, I’ll give him that—before Starfleet intervenes. Why would Starfleet get involved in an earthbound vessel’s affairs, you and certain inquisitive skippers may ask? Because Jimmy Kirk isn’t just any random stowaway. He’s the Starfleet man’s son.

Imagine if in The Breakfast Club John Bender had been the principal’s son, and that should give you a fair impression of the Kirks’ relationship at the start of the story. George’s behavior makes for a significant obstacle to enjoyment. He is a titanic square, the kind of person who says things like (I cannot emphasize enough that these are actual quotes) “Look, you retract your bristles, bud!” and “Watch your lip, buster” and calls his son things like [checks notes] “greenhorn punk”, “little gangster”, and “that snot”. Literally everything out of his mouth makes you want to give him a swirly, and the book never fully recovers from these early stumbles. It’s genuinely really hard not to blame Jimmy for his withering contempt.

With George at his wits’ end, Winona (George’s wife and Kirk’s mother) suggests taking Jimmy with him on his next deep-space outing. Questionable safety plus the fact that the filial and recreational accommodations of the Galaxy class of starships are still well over a century away notwithstanding, it’s hard to see how being cooped up in space will thaw Jimmy’s hardened adolescent heart or be otherwise productive in any way. But George nonetheless seizes on the idea, and it’s his intentions that lead to my other big issue with this book.

Best Destiny appears to promote an agenda of adult wish fulfillment favored by a certain breed of parent. Wouldn’t it be marvelous, the timbre of the writing suggests, if only the troubled lad could see for himself the tangible results of strict adherence to rules and regulations? If I expose the young ruffian to people doing good rather than browbeat him with endless talk of it, then surely the scales will fall from his eyes and he will transform into a MAN that I can be PROUD OF! I’m not saying this can’t work. But as it’s presented in this particular story, it just doesn’t ring true to me. George Kirk is simply too much of a hotheaded dweeb for me to buy into the idea of one harrowing space cruise completely changing the complexion of his relationship with Jimmy. Looking back on my Final Frontier review, I see I preferred George Kirk’s willingness to take action over Robert April’s passivity, but I did a complete 180 on the characters this time.

Fortunately for George, he’s both surrounded by cooler heads and flattered by proximity to an even worse parent. On the way to a ground-breaking ceremony at Faramond, a shuttle containing the two Kirks, Robert April, Carlos Florida (aside from April, the most prominent recurring character from Final Frontier), and a handful of other officers is attacked by pirates from the dreaded Blue Zone. As they think on their feet and fight to stay alive, Jimmy is moved by their ingenuity, bravery, and selflessness, and when he gets a chance, he tries to emulate their heroic gestures with one of his own, attempting to pilot the makeshift escape pod they build for him into the pirates’ engine exhaust and blow them up. He misses, but gains a chance to sabotage the pirates from the inside.

Jimmy meets his funhouse-mirror counterpart on the pirate ship in Roy Moss, a ponytailed young man about his age. Roy is constantly mocked and belittled by the other pirates—most of all by his own father, Big Rex Moss—but he takes solace in the fact that he’s the smartest person on the ship, and one day they’ll all see and they’ll all pay. Roy mostly serves as level-1 fodder for Jimmy’s fledgling powers of armchair psychology, though he also, as you may begin to suspect while reading, plays a significant role in the framing story, which I haven’t talked much about since 1) it’s nearly completely useless1To further reinforce this point, the audiobook does away with it entirely. and 2) it results in some character beats for present-day Kirk that would ordinarily be disappointing enough on their own, but are extra lame when viewed through the lens of the specific film this novel’s events immediately follow.

It’s not a great sign when a Kirk-heavy event novel’s worst bits are all Kirk-related. But thankfully, its supporting cast pulls a lot of weight—enough to actually make it a somewhat enjoyable read, despite its best efforts. I just think it has some bizarre notions about rehabilitating troubled youths, and the idea of taking a kid out in deep space seems like it would fit much better over the frame of TNG or another concurrent or later series. The family history might be the reason you’re drawn to the book, but it almost certainly won’t be why you stay.

I give Best Destiny 2.5 out of 5 coolant leaks. There’s a lot working against this story, including its bizarre agenda of parental wish fulfillment, the immense unlikability of George Kirk, and an almost totally pointless framing story. But numerous supporting characters step in to make this an at least moderately entertaining read. There may yet be a good story involving these characters, but once again I fail to be impressed by the adventures of the Enterprise’s first crew.

NEXT TIME: Scotty faces the grim prospect of obsolescence in Relics