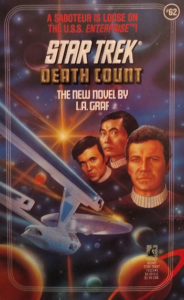 This week, when a trip to the souvenir shop goes sideways for Chekov, he’ll soon have more to worry about than a night in the slammer. An efficiency expert starts gunning for his job—that is, until he gets gunned down himself. What goofy hobby is Sulu taking up this time? Has The Motion Picture finally been stripped of its Worst Transporter Accident title? And is someone trying to ship Chekov and Uhura? All this and more in Death Count, the book that points its thumbs at thee.

Have you had your fill of Chekov yet? Would three front-and-center roles in the last four TOS books be pushing it? The L.A. Graf writing team is prepared to test the limits of that good will with their second contribution to Trek lit, Death Count. Much like how there was a glut of Romulan antagonists way back in the mid-20 range, the navigator turned security chief appears to be enjoying his own disproportionate run in the spotlight. As in L.A. Graf’s first novel, he spends much of his time dealing with personal insecurities and getting the ever-loving snot beat out of him, though in this case to less exciting results.

The Federation Auditor General—a title I would strongly advise against abbreviating—has decided to cut into the Enterprise’s shore leave and run efficiency audits on the ship. Already an unappealing prospect, the Enterprise must endure the audits while also patrolling Andorian-Orion space. The Andorians are a hair’s breadth from declaring war on the Orions over the disappearance of one of their greatest scientific minds, Muav Haslev, and top brass believes having the Enterprise in the neighborhood will make both sides think twice about doing anything too rash. The Enterprise takes the assignment in place of the Kongo, which is too mangled and suffering from triple-digit casualties to proceed with the task.

Meanwhile, Sulu has dragged Uhura and Chekov to the starbase gift shop to indulge him in his latest hobby, something involving a marble pond and some bioluminescent water chameleons. When an Orion police soldier enters the shop and starts busting it up, they subdue him and contact starbase security, but Chekov ends up being the one that gets arrested. Being late for reporting back to the ship ends up being the least of his worries, however, as the auditors, led by the aggravating John Taylor, quickly zero in on his department, meddling in security’s routines and procedures, setting off false alarms to test officers’ efficiency, and constantly threatening a departmental restructuring—starting with him.

I probably would been fine with an entire book of Chekov defending his job performance, his crewmates rushing to back him up, and finally taking the lead in showing those simpering know-nothing auditors How Things Are Done In Space. But alas, it wasn’t to be: a string of brutal murders by an unidentified saboteur, including a transporter “accident” that makes the one in The Motion Picture look like spilled milk, shoves that plot thread aside pretty emphatically. From then on, most of the story is devoted to Chekov outmaneuvering the saboteur and trying to survive in a wrecked shuttle after the attempt to deliver Muav Haslev—who is found to have somehow gotten on the Enterprise without anyone’s notice and stowed away on it—back to the starbase goes awry. Some pretty solid action from Sulu and Uhura is sprinkled in for good measure.

Chekov also intermittently grapples with some personal stuff as he mourns the death of his friend Robert Cecil, who was serving on the aforementioned Kongo. Cecil, as the attentive reader may recall, was one of Chekov’s friends in his class at Starfleet Academy in his segment in The Kobayashi Maru (TOS #49), who participated in the Aslan Station challenge with him. He served as a great foil for Chekov in that story, but here he is reduced to grist for the redshirt mill so that Chekov can have some come-to-Jesus character development. It feels kind of cheap, and honestly I wish they’d made someone up entirely for this purpose.

In a way, these middle-of-the-roaders are the hardest books to both read and write about—this one even more so because for most of its duration it’s a bottle episode, so there’s not even an exciting setting to provide any environmental hazards or inspire any good scenic writing. Death Count honestly didn’t make me feel much of anything one way or the other. Part of it is that in some ways, L.A. Graf essentially trotted out the same character treatment for a second round, differentiating it only by surrounding it with new settings and villains. But for a book that was less than 300 pages long and had some fairly large print, I struggled mightily with this one.

The next TOS book, Shell Game, isn’t written by L.A. Graf, but it is Graf-adjacent, a solo effort by one of the team’s ladies. I don’t see Chekov anywhere on the cover or mentioned anywhere in the back-cover synopsis, so here’s hoping their third publication in an eight-month span sets off in some other, hopefully more interesting directions.

I give Death Count 2.5 out of 5 efficiency audits. This one is very similar to Ice Trap, mostly in its exploration of Chekov’s thought processes and somewhat lurid desire to see him put through the wringer. But it does suffer from diminishing returns and the lack of an exciting planetary setting like Nordstral, so overall you’re probably just better off sticking with Ice Trap. Some good character work among the lower bridge ranks saves it from the more damning echelons of mediocrity. If you absolutely can’t get enough of everyone’s favorite Russian security chief, it’ll give you a completionist’s fix, but for casual readers, there are better options.

NEXT TIME: A young Jim Kirk gets scared straight and discovers his Best Destiny