Well, it finally happened: an article is going up on this site in excess of 24 hours late. It was inevitable, perhaps more so on a week where three posts are supposed to be going up (and Wednesday’s Judgment Rites installment isn’t looking too timely either). But hey, at least I saw some stuff this time around! 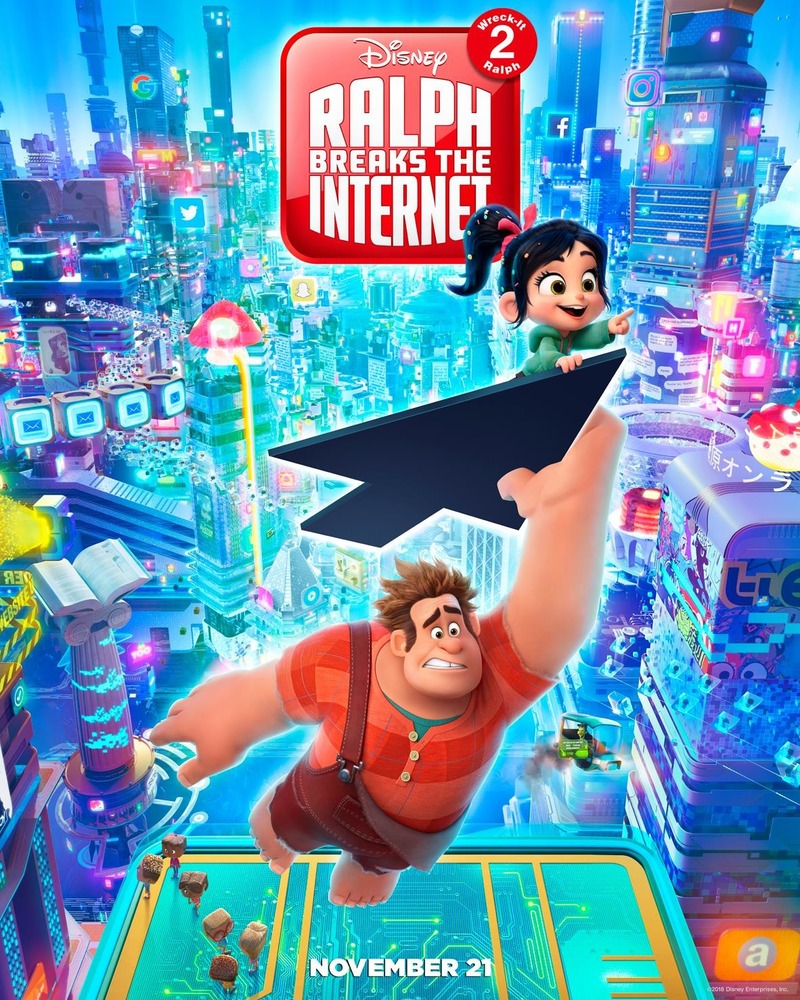 I don’t get to go to the movies as a full family unit too often, on account of my wacky work schedule, but the stars aligned and we all got to see Ralph Breaks the Internet a couple weeks ago. I compare it to Finding Dory: a sequel that on the whole probably strictly speaking didn’t need to be made, but that is perfectly fine and has a sweet message. If you are going into this hoping for any kind of criticism or commentary on late capitalism, you’re going to come up short—unsurprisingly, being a Disney product, this is not a movie that’s going to rock the boat on fraught topics like Amazon. It is exactly like being on the Internet on your computer at home, except brighter and louder (I had a headache afterward, and we didn’t even watch it in 3D). There are jokes about pop-up ads and ad blockers in a movie made in this, the year of our Lord 2018. The ultimate message, about letting go of your insecurities and allowing your friends to find their bliss even if that bliss is far away from home, is poignantly acted by the two leads.

Also, if aliens discover our civilization after it’s gone and use this movie to learn what the Internet was like, they will get the impression that eBay was way more important to the Internet than it actually is.

I’m a huge Coen Brothers fan, so naturally I had to check out The Ballad of Buster Scruggs on Netflix as soon as time allowed. For people drawn in on account of its strong O Brother Where Art Thou? adjacency, the title short is basically 15 minutes of “What if Delmar talked like Everett?”, which is every bit as satisfying as it sounds. It underwhelms more as it goes on, with the fifth one only being okay (except for the ending) and the sixth one being the only one that outright sucks, but the quality of the good stuff is so high that a story featuring Stephen Root wearing pots and pans as armor and yelling “PAN SHOT!” when James Franco shoots one is somehow only the fourth-best segment. Of the six shorts, “Meal Ticket” was my favorite, and I am absolutely not kidding at all when I say Liam Neeson deserves an Oscar nomination for his acting in it.

Of course, Stephen Hillenburg, the creator of SpongeBob Squarepants, died of ALS at age 57 on November 26. For people of a certain age, SpongeBob quotes work as a linguistic currency in the way that Simpsons or Seinfeld quotes do for slightly older folks. SpongeBob debuted when I was 14, but even in that adolescent too-cool-for-cartoons phase, I realized that they were cranking out constant gold all the way up through the first movie.

I think this is the first time I’ve ever watched a generation younger than me realize they just lost an icon. His name appears at the end of the opening credits, and I think it kind of winnowed its way into kids’ subconsciouses, so that when he died, they knew what a big deal it was without necessarily knowing why or how they knew. He only worked on two animated shows, but Hillenburg’s impact on animation is immeasurable.

Okay, fine, you got me. This is mostly just an excuse to post “Sweet Victory”, the greatest moment from the indisputable all-time greatest SpongeBob episode, “Band Geeks”. See you in two weeks.