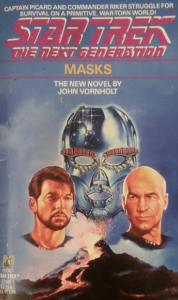 This week, the Enterprise and Ambassador Davy Crockett explore a planet that’s all masks all the time. While Picard bunks with a new lady friend, Riker gets worried enough about the captain’s curfew to cruise the neighborhood looking for him, and along the way they all hope to rock out with the Almighty Slayer. Can Geordi and Wesley be trusted with the conn? What are Deanna Troi’s last wishes regarding body disposal? Today, we look at Masks, the book that would (never) be king.

The book opens with the Enterprise is on its way to visit Lorca (no, not him), a planet that’s home to a civilization co-founded by a touring theater troupe and the luddites who bummed a ride with them. Naturally, with those two groups in on the ground floor, Lorcan society is both very primitive and inspired by its’ founders thespian backgrounds. On Lorca, everyone wears masks, and those masks indicate a person’s occupation and/or social standing. If you’re feeling froggy, you can duel someone else and try to earn their mask. Everyone on Lorca wears a mask at all times, and they get hilariously puritanically scandalized when they see someone without one.

The crew is oohing and aahing over one of Lorca’s finer accoutrements, the Ambassador Mask, recently acquired, fittingly, by a Starfleet ambassador and explorer named Fenton Lewis (a direct descendant of Meriwether, he doesn’t mind tellin’ you). Lewis invites Picard along on his mission to establish diplomatic relations and. Picard is excited and bizarrely credulous, but Riker isn’t so gung-ho about the idea. He doesn’t like Lewis’s dumb smug face, so he goes looking for dirt on him and hits two out of three cherries. It’s obvious he’s gotten into it with the Ferengi, but that data has been removed (at Fenton’s own request—being an ambassador has its perks). The full extent of his dirty dealing is revealed not too long after; suffice it to say it’s a miracle Fenton Lewis ever passed even the most cursory Starfleet background check.

Picard beams down to the planet surface with Worf and Troi in Halloween masks from the Enteprise’s Party City, and it isn’t long before a volcanic eruption spews a ton of ash into the air and the Enterprise can’t track them. Riker, worried that they haven’t checked in, heads down maskless with his own team of Pulaski, Data, and a security officer named Ensign Greenblatt. Picard and his team get waylaid by a band of travelers, and Lewis almost immediately loses the Ambassador Mask to the new group, though Picard “defeats” their leader, Piercing Blade, in a duel with some cheating assistance on the down-low from Worf, earning him enough respect to not to have to be their vassals. Meanwhile, Riker asks the man they’re accompanying, a peddler named Day Timer, about Almighty Slayer, the leader Lewis is looking for. Day Timer tells them about the Wisdom Mask, the top mask on all of Lorca; whoever wears it can command obedience from anyone else, and is functionally the “ruler” of the planet.

Soon enough, Lewis breaks off from Picard’s group and starts doing his own crazy thing, and Picard starts getting nice and cozy with Piercing Blade in one of the book’s stranger developments. Picard’s romance with Piercing Blade predates any of his televised entanglements. It’s kind of unusual for Picard to be the one who gets the love interest, but at the time of this book’s publication, Vornholt was breaking then-new ground. On TV, the earliest instance of Picard allowing himself the pleasure of carnal relations is in season three, when he gets down with Vash in “Captain’s Holiday”. This relationship is more like the one he has with Kamala in “The Perfect Mate”, where he’s clearly turned on and just barely holding onto the thinnest thread of his sense of duty. Still, while it’s odd to see him give himself over to the moment with so little internal resistance, their relationship does at times get sufficiently steamy. (“His mouth found hers, and all talk was over” — yowza!)

On a more personal note than usual, something I experienced with this book that I haven’t with any other book so far, even those that are even worse than this one, is that I had great difficulty wanting to pick it up. Even unabashed crap like The Peacekeepers went by in a flash, comparatively speaking. But I just had no desire to pick this one up. I usually put down a Trek novel in two to four days, depending on length and the size of the print. This one took well over a week, easily the longest time I’ve taken to finish any book since the Deep Space Spines project began in earnest. It’s been a tough one to write about as well. I think that counts for something—nothing good, obviously, and it’s a difficult thing to quantify, but it’s a very real knock against the book.

In addition to being a chore to pick up, it’s pretty anticlimactic. The major nuisances of the book all disappear without much action on the part of the crew, who run into their corpses not long after they’ve done each other in with their own greed. From there, it all wraps up rather quickly. While there are a few nice character-to-character interactions throughout, this book, like most so far, still does not reach the same rate of growth as the show even as we approach the third season in real-world time, which is where TNG starts getting mostly pretty good. So far, with the exception of a couple of outliers, TNG continues to struggle to carve out a comfortable space in the literary realm.

I give Masks 1.5 out of 5 Ambassador Masks. Masks isn’t the worst Star Trek book I’ve read to date, but it was easily the most burdensome. It’s got a low-quality plot, an annoying villain, out-of-character behavior, and sloppy attention to detail. Vornholt of course will go on to be one of the most prolific authors of Star Trek novels, most of which are TNG stories, but this first one—not just his first Trek novel, but his first novel period—is a major bust. You’re better off not taking the mask off of this one.

NEXT TIME: Picard vies for The Captains’ Honor