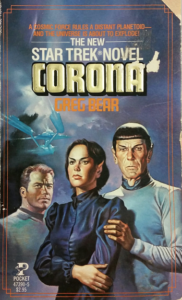 When I bought this book from the used bookstore where I often buy my Star Trek paperbacks, the clerk offhandedly said “Oh, cool, Greg Bear” like I’m supposed to know who that is. In fact, Greg Bear has, at that same bookstore, an entire row of a shelf in the science fiction section filled solely with books written by him, so there’s no doubt he’s a highly prolific author who’s probably done something cool. This, however, is his only Star Trek novel. Is there a reason for that? Usually, there is.

The prologue introduces us to T’Prylla, a Vulcan scientist (and, as it happens, distant relative of Spock) studying Ybakra radiation in the Black Box Nebula. She’s there with her husband Grake, her two kids Radak and T’Raus, and two research assistants in a kind of self-imposed exile, her unorthodox methods of logic having made her none too popular back on Vulcan. Her kids are starting to be controlled by some unknown force, and right before they/it take(s) over altogether, she and her husband manage to get a message out on normal-space frequency (subspace communication being on the fritz due to the aforementioned Ybakra radiation).

Ten years later, fresh-faced reporter Rowena Mason, from the backwater mining planet Yalbo, which sounds like an off-brand of dog food, boards the Enterprise. She’s on assignment to whip up a story about the ship’s new computer safeguard, which is programmed to take over operations in the event that the captain does something inadvisable, and will hand the reins back over when the situation is defused or the ship is out of trouble’s reach. As we all know, Kirk is a totally straight-laced, by-the-numbers corporate stooge, so this will never pose a problem. The safeguard is programmed with the memories and experiences of six legendary Starfleet captains, which guide its decision-making process.

Rowena is a bit of a bundle of issues. She’s severely bigoted against aliens, to the point where she can barely be around Spock or Yimasa, the Andorian navigator, without blowing a gasket. Uhura, who Rowena is bunking with, dresses her down pretty thoroughly about her human-centric attitude, and rightly so, though it’s a little messed up that literally the only reason Yimasa exists is so that Rowena can be prejudiced against him—plus, it shuffles Chekov over to weapons a few stardates before I think he was canonically posted there, so it’s messy on multiple levels. It seems like Rowena’s prejudices could have manifested exclusively against Vulcans and still successfully made a general point about them. Rowena gets taken to task more than once in this book, which is somewhat satisfying, since overall she’s a moderately annoying character.

Speaking of annoying characters, we also have Jan Veblen, the non-military computer engineer in charge of overseeing the new monitors. At least, it’s presumed he’s annoying; Veblen’s biggest crime seems to be that he’s dumpy and rumpled, the sort of guy Stewie Griffin would follow around with a sousaphone. This, along with his tendency to be benignly amused by his monitors and himself, is evidently enough to earn a sort of amorphous loathing from Kirk, and mostly indifference or mild irritation from everyone else. I mean, he may not have washboard abs or a full head of hair, but he performs his job just fine, and when he lays into Rowena during an off-the-record interview, it feels more cathartic than was maybe intended.

So they get to Station One, to which a security team beams over, and in a scene that could easily be a jump scare in a horror movie, they see a Vulcan child. The tricorder isn’t even picking up on him, but there he is. The ensign’s description roughly matches that of T’Prylla’s son Radak. Radak—or, more accurately, the thing controlling him—has been keeping Grake and T’Prylla alive in an “adapted” (i.e., incorporeal) form, restoring them as needed for the sake of appearances and such, but returning them to the adapted state when they refuse to cooperate with him. The mind-controlled Vulcans won’t take medical supplements, though they eventually capitulate on allowing the Enterprise to try to revive the scientists frozen in stasis, although then the new computer system denies it because they’re legally dead due to severe nerve damage from the Ybakra radiation.

After the phenomenon gets a hold of Chekov in mid-beamdown and forces him to sabotage the shuttle for moving the sleepers, Spock builds a cube that will block Ybakra radiation (the waves on which the thing transmits its mind control powers) and manages to get T’Prylla inside it. T’Prylla calls the force that’s controlling them Pau, or Corona in English.

The kids appear to be the ones running the show, which tips Spock off that something is amiss, since it’s highly irregular in Vulcan culture for kids to have a hand in anything better left to adults. I guess it’s safe to say no Disney- or Nickelodeon-style kid empowerment sitcoms ever took off on Vulcan. Anyway, it turns out that the kids are most easily controlled by Corona because they haven’t yet been through ka nifoor, a Vulcan maturing ritual that will help them better stand up to external influences like Corona’s. When Corona attempts to possess Spock, Spock telepathically passes the ritual to Rowena’s mind so she can carry it out, humans being a little more resistant to Corona’s invasion attempts than Vulcans (a fact that miffs Spock a little more than he’d probably care to admit). She resists out of her usual prejudice, but only briefly, before wigging out again and almost refusing to do the deed.

Corona’s whole deal is that it existed in the first few minutes of creation immediately following the Big Bang, which seemed to it like an eternity. It was a scientist, and it saw wonders such as tiny human minds could not imagine (or even witness, because the universe in that state was too volatile for humans to survive in). But it can only manifest when subspace anomalies disturb the formation of young stars, and the space station and the object of its research provided the perfect opportunity for it to pop back up and set to work. Corona wants those glorious three minutes back, and he considers everything that came about afterward “dead”. He wants to erase the current universe and create new ones so he can live in that moment of creation and continue his studies.

Kirk tries to do his Kirk thing and talk Corona out of destroying everything in existence, but the new computer thinks he should open fire, and so it overrides him, which doesn’t really make a dent but does restart the machines on the space station that are attempting to reset the universe and gives Rowena an in to talk to Corona, who entered her mind during ka nifoor. Rowena realizes that only she can convince Corona to stop what it’s doing, because she’s a writer, doggone it, and writers use their words! Truly, the pen is mightier than the phaser. She doesn’t say anything that any reasonably intelligent (and non-bigoted to boot) person couldn’t have come up probably, but Corona finally Gets It, ditches his universe restoration project, and makes all the frozen scientists good as new. There’s a reason they usually give Kirk these big grandiose speeches. Instead, he gets in that weird haze of insecurity that books sometimes leave him in at the end, wondering if the computer was right to overrule him and if his course of action was wrong even though he didn’t do anything anyone (including the monitors) could have faulted him for.

To be honest, it’s hard for me to think of much to say about Corona. This is the first STPB that hasn’t left much of an impression on me one way or the other. I often found myself doubting that I was following events properly, a feeling that didn’t let up until near the end. There are occasional references to duty that never really get followed up on: Spock, testing the memory-experience of the sole Vulcan captain in the new system, eventually stalemates it into repeating “Your duty is foremost”, while Veblen, goofy though he may come across, is committed to stopping the crew at any costs if they try to subvert his monitors, which he never has to resort to. The whole thing sits firmly in the midst of unremarkable adequacy. I don’t fault Bear for this, and in fact I’m kind of interested in reading some of his other work; I just think he’s one of those authors who just isn’t the right fit for Star Trek.

Not really terrible, but also just kind of there. I learned while writing that Greg Bear has more of a reputation for hard sci-fi, which could explain some of my lukewarmness toward the book; writers of hard sci-fi, in my opinion, tend to have a tough time really nailing down the Trek vibe. The original characters are either annoying or mishandled, and outside of some good scenes and good tension generated from Uhura bunking with a bigot, nothing the original cast did thrilled me all that much. Maybe after 15 weeks, I’m a tad burned out on following the exploits of the original crew? Well, that’s convenient, because the next book has (almost) nothing to do with them whatsoever!

NEXT TIME: The Final Reflection