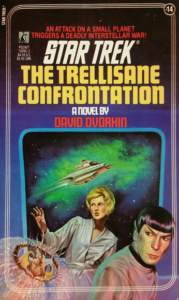 The Enterprise drops by Trefolg to pick up some prisoners affiliated with the United Expansion Party. Kirk accepts an invitation to a courtesy call from the colony’s governor, who briefs him on the prisoners and delivers an extra message: Trellisane is under siege by its neighbor Sealon, and the Klingons seem to be behind it in some way. Should they drop the prisoners off at a starbase first? Nah, it’s probably not a big deal. It’s only two Earthmen trained in the ancient art of the Assassins, two Nactern women who are basically Amazon warriors, an amorphous ball of flesh that’s actually four beings life-bonded into one, and an infamous organizer and shit-stirrer who lives for martyrdom. I’m sure they’re just as mild-mannered as can be.

In orbit around Trellisane, a ship approaches with intent to attack. Kirk orders Sulu to fire phasers and ends up scoring a one-hit KO. Probably not Klingons, then. The traces of water vapor Spock picks up suggest Sealons. Kirk isn’t too thrilled about that, because one, why didn’t Trellisane let them know Sealons were out and about; two, it suggests Klingon interference in Sealon culture is far worse than originally anticipated; and three, it could be that the Klingons have found a way to subvert the Organian Treaty, i.e., by having other races fight for them by proxy. The implications are very chilling if that’s indeed the case.

Kirk, Spock, and Bones meet Veedron, leader of one of Trellisane’s gemots—essentially, a guild that specializes in one area of expertise, with all the guilds together comprising the planet’s government. Veedron is very long-winded and has very definite ideas about the civility of the Trellisanians versus the barbarism of the Sealons. It doesn’t take many pages of his gum-flapping to make you think, “Hmm, is it possible the Sealons are more shrewd and intelligent than he’s giving them credit for and he’s making Trellisanians sound way more civilized than they are?” Buddy, you have no idea.

The Sealons mount another attack while the trio is still planetside, but in the middle of communication with Sulu, Hander Morl, the aforementioned organizer, hijacks the Enterprise and tells Kirk “going to the Romulan Neutral Zone border to trigger intergalactic war, bbl, j/k”. So for future reference, not dropping dangerous prisoners off at a starbase before doing anything else: BAD IDEA. The story now alternates between the Enterprise, where most of the cool stuff happens, and Trellisane, where Kirk breaks the Prime Directive and spends a non-negligible amount of time wondering how his Starfleet career will withstand the double whammy of violating the Prime Directive and having a rogue blowhard steal his ship out from under his nose.

The United Expansion Party antagonists receive varying degrees of dimensionality; the Assassins remain flat throughout, the Nactern women get a little bit of development, and Morl and the Onctiliian are fully fleshed out (no pun intended in the case of the latter). The Onctiliian’s subplot is my favorite in the book. It’s a giant ball of flesh that is actually four beings combined into one via a four-sex mating bond; the combined being has all the strength and intelligence of its individual constituents. When one of them dies, the rest pass on after a brief period of agony and madness. Nurse Chapel manages to fill the void and become the first person in galactic history to save an Onctiliian with a severed four-sex bond, and each reveals qualities in the psychic exchange that profoundly affects the other. It’s a great thread that finally gives Chapel more to do than get in a catfight or make goo-goo eyes at Spock, and it’s only marred by the fact that when the inevitable status quo-resetting severing of the bond occurs, she manages to somehow suffer virtually no lasting ill effects, unless “getting slightly wistful” counts.

Hander Morl also cuts a fascinating figure, constantly vacillating between risible ineptitude and frightening amorality. Morl wants nothing more than to make history as a martyr for the UEP, but sitting in the command chair of a starship makes him feel differently, if only briefly, and he actually has quite a bit of respect for the efficiency and capability of Starfleet officers, as well as their fearlessness in the face of danger. You really get the feeling that Morl could have cut the mustard in Starfleet himself if his life had played out differently, and it’s a bit sad to see him undone by silly mistakes, even as he does something late in the book that is so heartless and dishonorable and nakedly shitty that I had to put the book down and walk around with my head in my hands and my jaw on the floor for a solid ten minutes.

Those silly mistakes I mentioned represent one of the book’s minor themes. Dvorkin implies more than once that a big part of what separates bridge officers from lesser crewmen is that they don’t make preventable mistakes, although Kirk spends the whole book doing almost nothing but making preventable mistakes, and of course he makes it out smelling like roses in the end, so it doesn’t quite track. While the attempt to rationalize the exceptional nature of the bridge crew through counterexamples like Hander Morl and Lt. Kinitz is novel, it simply falls a bit flat. It’s better expressed and more amusing when, for instance, Scotty, Sulu, Chekov, and Uhura are running circles around a frustrated Morl.

I haven’t talked a lot about the Trellisanians, because I find them irritating, especially Veedron and the other upper-crust gemot leaders, whose lack of ultimate karmic punishment I found deeply unsatisfying. It’s pretty obvious early on that Veedron doth protest too much when he’s thumping his chest about how civilized the Trellisanians are, and it starts out bad and keeps getting worse. First, it turns out the servant class has no representative gemot, so they’re straight-up slaves. Said slaves are considered subhuman; Veedron pulls out a whopper about the yegemot (slaves) being domesticated animals bred into humanoid shape, which sounds so outlandish even at face value that it breaks even sci-fi levels of suspension of disbelief and sets the bullshit meter on fire. They also put electronic implants in the yegemot‘s heads so they can telepathically destroy the implant and vaporize their brains when they no longer have any use for them (McCoy spends a good chunk of the book removing these implants from slaves’ brains). And to top it all off, McCoy learns they cannibalize the remains of the dead yegemot, a development that’s actually spoiled for you if you read the synopsis on the back (in a roundabout way, but still) and, like pretty much everything else in this novel, lacks a satisfying payoff.

Dvorkin neatly summarizes the Trellisanian nature on page 87: “…malleable, retiring, timid, and so excessively humane that they would rather suffer pain from their enemies than inflict it.” Well, excessively humane to other races, anyway. But they follow this description so slavishly that they end up being stupid and infuriating. Veedron actually thinks that if Trellisane doesn’t defend itself, the Sealons will get tired of invading and bombarding it, which is so blindingly idiotic, it makes Trump look like Sun Tzu. Yet for as easily as their arguments for maintaining slavery are toppled, all they’re really told is that slavery will look really bad on their Federation application, and the ramifications of the slave uprising instigated and led by Kirk remain largely up in the air at the story’s end.

Morl loses control of the ship after getting a little too trigger-happy, and Kirk, captured by the Klingons and forced into an “advisory” role in which he tells them how to find and destroy his ship, gets the Enterprise back pretty much just by asking to beam over and pretending to swear he will continue to honor his captured status. Of course, he doesn’t; once back in control, he manages a tenuous agreement with both the Klingons and Romulans, then douches all over Spock and Bones for concurrently working something out between the Trellisanians and the Sealons—a massively uncool and out-of-character outburst that ends the proceedings on a sour note, even after he apologizes and concedes the superiority of their course of action. Is anything really solved, though? Who knows and who cares, it’s on to the next mission.

There is some fun and excitement to be had in the moment, especially in scenes aboard the Enterprise, but just about every plot thread you can identify ends in a whimper. There are cool seeds of ideas, and some even bear fruit, but ultimately, none are handled totally correctly. If you’re a dogged completionist, you’ll probably dig the Chapel/Onctiliian material and the bridge interplay during the hijacking. Otherwise, I can’t really recommend it. Also, I just realized the title sounds like a Big Bang Theory episode.