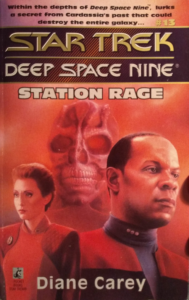 This week, when an exploration of the station’s deepest depths turns up a few cold plates of Cardie corpses, only Garak knows the true value of their find. But when he reanimates the dormant bodies, an old Gul gets the Google Alert he’s been dreading for decades. Will a misused homonym portend a bad book? What’s the right amount of Earth idioms for aliens to use? And is this the part where Odo blows up? All this and more in Station Rage, one of the tightest MVP races to date!

Station Rage
Author: Diane Carey
Pages: 277
Published: November 1995
Timeline: Between seasons 3 and 4, after Sisko was promoted to captain
Prerequisites: None

Poking around in some of DS9’s most obscure nooks and crannies, Odo and O’Brien uncover twelve pretty dead-lookin’ Cardassian bodies laid out on slabs. No one is really sure what to make of them except for Garak, who, after an uncharacteristic freak-out, recommends the makeshift tomb be resealed immediately. Of course, that’s just a ruse to throw everyone off the scent that he can come back down for them later. For only Garak knows who the men really are: the otherwise nameless High Gul—more or less the Cardassian equivalent of Kahless—of a sect known as the Crescent Order, and a fraction of his most loyal men. Garak later sneaks back in to awaken the dormant High Gul and his squad, hoping for a cushy job among the High Gul’s ranks when the feared general returns to reassert his rule over the Cardassian Empire.

The activator device Garak uses sends an automated signal to a Gul named Fransu, who knows exactly what it is and why it’s going off, and packs up for a road trip with his assistant Glin Renzo to sweep it under the rug before anyone can figure out what he did. Meanwhile, the resurrected Cardassians waste no time sabotaging DS9 in various ways, eventually forcing Sisko to evacuate the civilian population to Bajor. As it turns out, you don’t earn a lofty title like High Gul without being a pretty sharp hunk of cheddar. Identifying Odo as a major threat, the High Gul incapacitates him with a booby trap that suffuses him with a fissionable element that will cause him to explode if he reverts to his liquid state, removing a huge advantage for the home team.

But the Crescent Order starts to lose ground as Sisko and his crew begin to eke out minor victories and take huge risks by calling scary bluffs made by the High Gul, while Garak starts to feel a little buyer’s remorse once he realizes the High Gul’s big plan to foment chaos among the big empires will go over like a lead balloon in an era that’s much more overseen and united by the Federation than his heyday was. And of course, there’s still Gul Fransu to worry about, headed toward Deep Space Nine in his Galor-class warship, determined to finish the job he started eighty years before…

At first, Station Rage feels like it’s gearing up to be one of those rare, zany Halloween-esque sorts of stories, a la Bloodthirst, a feeling that is not at all ameliorated by the fact that the early chapters repeatedly refer to the Cardassians’ hibernation slabs as “revival palettes” [sic] when the correct word would have been “pallets”. I was really afraid for a minute that this was going to be a painfully stupid novel. Thankfully, however, there’s no need to fret, as the story quickly turns into something much more suspenseful and exciting than that. What Station Rage eventually reveals itself to be is a meeting-of-the-minds kind of story, in which Sisko and the High Gul each scramble to be more 4D chess moves ahead than the other. The High Gul is a worthy opponent for Sisko, much more cunning than a bloviating doofus like Dukat, and there are many points where it’s hard to imagine how the good guys are going to prevail, with even the ever-present cushion of the status quo failing to provide comfort.

Station Rage is not without its faults, although they’re minor ones. Garak gets off the hook way too easily in the end, and there’s an odd vibe throughout where many of the non-Terran characters use Terran idioms with a frequency that stands out in an uncomplimentary fashion. I was also shocked to find it pretty violent by Trek standards, though hardly to any upsetting extent. Other than that, I’m happy to say I was pleasantly surprised by this one, not to mention relieved that it turned out not to be as bone-crushingly stoopid as the first few dozen pages portended. While not outstanding, it’s better than many of the numbered DS9 novels we’ve gotten through so far, and a heck of a lot of fun to boot.

Good. What seems at first like it’s going to be a resoundingly silly book about Cardassian zombies quickly disabuses the reader of that notion and turns into something much more complex and satisfying. Sisko and the High Gul make great rivals, each a worthy opponent for the other, and several of the crew step up and offer some great performances—some on the page, others off. An exciting story that appears to finally signal a move away from the awkward early years to stories set in seasons in which the show was more starting to hit its stride.

NEXT TIME: Voyager runs afoul of an Incident at Arbuk