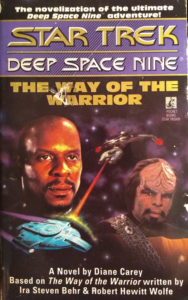 This week, when the Klingons come over to crash on Sisko’s couch, he enlists Worf to figure out where their road trip is taking them. But when they learn exactly what kind of old-fashioned throwdown Gowron is planning, they’ve got to stop him before he wipes his butt with every treaty on the books. Is talking about life mutually exclusive from living it? Do Klingons eat salad? And is there something fishy about Morn? All this and more in The Way of the Warrior, the book that can’t not contain an obscure military history reference!

The Way of the Warrior
Author: Diane Carey
Pages: 279
Published: October 1995
Timeline: Roughly half a year after Star Trek: Generations
Prerequisites: Familiarity with Worf and Gowron; mild awareness of what the Dominion is and that at this point in the series the conflict is beginning to build, though no one from the Dominion appears in this book

Once again, it’s novelization time, this one tackling Deep Space Nine‘s 90-minute season four premiere, “The Way of the Warrior”, which sees Sisko trying to prevent the Klingons, who fear that changelings have infiltrated the highest levels of government on Cardassia Prime, from starting an internecine war that will leave both sides ill-equipped to fend off the Dominion when they bring the full force of their armament to bear on the Alpha Quadrant. The episode is most notable for bringing Worf into the main cast, as well as introducing General Martok, whom I was legitimately shocked to see with two eyes when I rewatched the episode for this review (forgot he had both up until the Jem’Hadar prison). Despite those important debuts, I feel the episode drags on a bit, and I had trouble keeping my attention trained on it. In fairness, that’s true of several Klingon-centric episodes and stories, but still.

It’s funny about the novelizations. Though many to date have contained enough original scenes and Easter eggs to make approaching a new one theoretically exciting, I can’t help but face each one with a sort of amorphous … not dread, per se, but, like, concern—that it’s just going to be a mundane retread of events, a workmanlike slog that made a little money off the hype of a new season premiere or finale and is now wholly without purpose. On occasion, that has borne out. But for the most part, they’re good enough that I shouldn’t be defaulting to this feeling. And yet.

One might imagine that Diane Carey’s name appearing on the cover might make for a double shot of trepidation. But whatever you think of her (and I certainly haven’t been shy about it), by this point she has communicated many of her preferences, likes, and dislikes clearly enough that you can tell with some accuracy before even opening a book she wrote whether she’s going to put all her energy into it or not. Deep Space Nine is very much in her wheelhouse in a way that the more measured and bureaucratic Next Generation never was, and the deeper you get into the series, the closer you get to the incipient stages of the Dominion conflict and then full-blown war, the more you can tell from her past excitement about military engagements that she’s going to get really into it, showing off her big nautical-encyclopedia brain by dropping words like “abaft” with the subtlety of a sledgehammer and having aliens casually discuss ancient Terran military tactics (which happens here, when Martok talks about Quaker guns while discussing DS9’s ordnance).

You could feel Carey starting to get cozy with DS9 in The Search but not really getting too out there with it. The Way of the Warrior is a much more assured novelization, and she’s fully picking up what DS9 is laying down now, which results in a lot more fun and several new scenes, among which some of my favorites included the bookends with Worf at the Boreth monastery, a great one where Garak is completely dumbfounded by Worf’s total subversion of all his assumptions about Klingons and you get to see the gears turn in Garak’s head about how he decides to parcel information out to Worf, and another one I’ll have to wait to talk more about in a minute. Many of the Klingon characters, even tertiary ones, receive expanded plot lines and increased presences, and there’s a much meatier role here for Garak, whom you can tell Carey is quite amused by (though who among us isn’t?). Carey is clearly having a lot of fun, and it shines through, even in the parts of the book that are already part of the episode.

So my fears of a novelization being redundant were laid back to rest this time, but I can’t promise they won’t creep up again in the future. It should help that all of the DS9 novelizations forthcoming—most of those by Carey as well—are for better episodes than this one. Not that this is a bad one—it’s just a bit interminable for my tastes. I feel like we might finally be getting out of the range where we’re still working through novels commissioned before Deep Space Nine started, and frankly, it’s about time. Introducing Worf to the mix is the point where the show starts getting really interesting, and I’m more than ready to start reading novels set in the back half as well.

Good. We got good-mood Carey this time; since she was invested in the material, it came out smooth and creamy, and with a minimum of many of her more annoying and/or infuriating tendencies to boot. Despite the fact that we’ve witnessed many excellent ones to date, novelizations always present a worry that they’re not going to add anything meaningful to the experience already provided by the episode, but this is one of the ones that manages to dispel that fear.

NEXT TIME: A double dip on Diane and DS9 in Station Rage