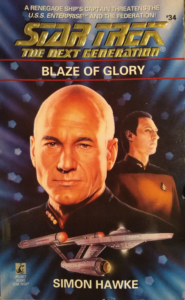 This week, when an old friend asks for help dealing with a space pirate, Picard suspects his crew might be overqualified for the job. But when the political situation in the system turns out to be pretty sticky, it becomes less clear who’s an enemy and who’s an ally. What’s the point of normie Vulcans? What’s the robot chick’s deal? And is this the Black Fire sequel we never knew we wanted? All this and more in Blaze of Glory, the book that tests the limits of what’s in a name.

One of the very first books I ever reviewed on Deep Space Spines, back when the site was little more than a wad of spit and baling wire, was Black Fire by Sonni Cooper. Black Fire is an incredibly weird book, and time has done nothing to dull that weirdness. It wears its fetishes on its sleeve, contriving to paralyze Spock so that a Romulan villainess can keep him as a pet and turning him into a pirate who takes on the eponymous alias. Women write erotic poetry about his exploits. There is almost nothing about Black Fire that is not completely bananas.

I thought about Black Fire a lot while reading Blaze of Glory. Really, the only thing they have in common is that they both prominently feature space piracy. But although you can’t say much in praise of Black Fire, it is difficult to deny that it is compelling in its own bizarre way, or that as total train wrecks go, it is at least a compulsively readable one. Say what you will about Black Fire, but it did manage to worm its way into the halls of my permanent memory, and that is a lot more than Blaze of Glory has achieved, or is liable ever to.

The Enterprise has been assigned to the planet K’trall, home to a people who are an offshoot of Vulcan and Romulan genetic stock. Unlike Vulcans, they show emotions, but they aren’t as aggressive as Romulans. In fact, other than physical appearance, they have nothing in common with their progenitors. Other than fogging up a sensor reading or two, there is absolutely no purpose or point to this whatsoever. The concept of normal Vulcans raises a host of distracting questions, and there’s nary a nerve pinch, mind meld, or salute to be found in this book. Who asked for this? Who wants this? I’m hard-pressed to come up with a more nothingburger idea in all the Star Trek novels I’ve read so far.

Anyway, Enterprise reaches Starbase 37, run by Captain Gruzinov, an old Academy colleague of Picard’s. Gruzinov tells them that the K’tralli overlord, J’drahn, is going low-key support to freebooters pretying on merchant shipping in the sector. One of them in particular poses major problems: Blaze, captain of the Glory, a Constitution-class ship that, much like how is done with police cruisers, was decommissioned, stripped of all its ordnance, and auctioned off. (So no, that isn’t just some bizarre mistake on the cover.) Picard is skeptical that this is a problem requiring the Enterprise’s intervention, until the Glory beats the snot out of it in a skirmish.

Talking to J’drahn only intensifies Picard’s suspicions, so he creates two investigative teams: one with J’drahn’s explicitly stated support, and an undercover squad comprising Riker, Geordi, and Angela Dorn, Starbase 37’s chief of security, in which the three pose as spacers looking for a new ship to serve on. While Picard pieces together a plot by the Romulans to expand their Neutral Zone holdings by offering to manage the K’tralli’s affairs once they get expelled from the Federation for selling out to the Empire, Riker and Geordi wind up on Blaze’s ship and must find a way to get word about their predicament out to the Enterprise without getting caught.

Everything in Blaze of Glory is either monumentally stupid, like K’tralli naming conventions, or interesting but not a good fit for the story, like the whole business about cybrids. I used to think Michael Jan Friedman was a little too fond of the alien apostrophe, but literally every K’tralli person and place has one in their name, like some kind of bad parody. It isn’t just the K’tralli that have bad names, though. Captain Blaze of the starship Glory made me roll my eyes so hard I could see my own brain, and the fake names Riker et al. choose for their spacer personas are astonishingly terrible. Like who isn’t going to run a Google search on “Bill Stryker” and immediately score a big fat hit? It is frankly astounding how something as seemingly unimportant as the names an author chooses can drag a book down so much.

The aforementioned cybrids hold a little more potential. Hawke lavishes four pages on the troubled history of the clones with cybernetic implants, and although they’re a cool idea, the book ultimately doesn’t have much time for them. The concept needs its own space and its own story to breathe, and it won’t be able to get that in the relatively rigid frame of a Star Trek paperback. The one featured cybrid character, Katana, is a trip, one of the few sparks of life in the book. Certainly, you can’t accuse an author capable of coming up with a character like that of having an underdeveloped imagination. But Katana feels like she was imported from an entirely different universe, and she’s a bit of an incompatible organ here.

Little else about the book is worth much of a mention. I disliked this one so much I had trouble keeping track of basic plot points—never a good sign. So much of Blaze of Glory makes you want to ask why: why did the author make this choice, why would that character say that, etc. I don’t want to spend the whole time asking questions; I want to be able to disappear into the story and ride it like a lazy river. Usually I’m able to do that after a while, even with middling or outright bad ones. But I never felt like I could unclench with this one, and that’s a feeling you never want with one of these books.

Blaze of Glory is the third and final Star Trek novel by Simon Hawke, and it is by a pretty wide margin the worst of the three. Returning to an antagonist well that wasn’t terribly profitable for him the first time around, Hawke is all of a sudden making weird choices that raise distracting questions and just do not land at all. Even the book itself hardly seems interested in maintaining its own suspense, and when it’s not goofy, it’s boring. Steer clear of this one.