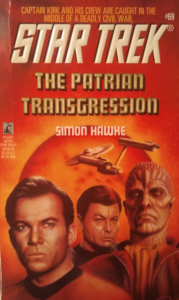 This week, when the Enterprise aids a non-Federation planet with its rebellion problem, Kirk finally gets to work with a diplomat he likes. But when he’s pushed into leading the way, he’s more than a little uncomfortable with the ace the cops have up their psychic sleeve. Which senior officer would you not want to catch en flagrante? Could you eat rat meat if it tasted like steak? And what’s the latest on future sports popularity? All this and more in The Patrian Transgression, the book whose title sounds like a Big Bang Theory episode.

Although not a member of the Federation, the planet Patria requests their aid in quelling a rebellion movement that’s gained a major advantage—viz., a loot drop of Klingon disruptors. The Enterprise is assigned to a support role; in charge is Robert Jordan, the famous author of the Wheel of Time saga who appears to have overcome the significant handicap of, uh, being dead to offer the Federation his services as a diplomatic envoy. Truly, a man of many talents. Jordan is accompanied by his undersecretary Kim Li Wing, whose Asianness and hotness are duly noted in both prose and dialogue.

Kirk used to be friends with Jordan back at the Academy, and looks forward to working with a diplomat he doesn’t hate for a change. So there you have it: a cushy mission with an agreeable partner, no problems whatsoever. The End! Oh wait, record scratch, that isn’t how stories work. Almost immediately, Kirk gets a fat lot of nothing from Jordan, who seems content to pass the buck and leave Jim’s neck on the block if things go sideways. Patria’s prime minister leaves him in much the same bind. In the immortal words of Ned Flanders’s mother, they’ve tried nothin’ and they’re all out of ideas. Kirk emphasizes that he’s cool with hanging back and providing impartial counsel, but the prime minister dumps the entire situation in his lap and says, essentially (I’m paraphrasing somewhat), “You have my blessing. Deuces!”

The party is partnered with a beat cop named Joh Iano, who takes them down to the mean streets to watch live Patrian Gladiators in a bar. The reigning champ, Zor Kalo, challenges Kirk to a spontaneous exhibition match and tells him amid the melee to not trust the police, that the underground has no contact with the Klingons and the Federation is being lied to about the disruptors, and that Iano is a telepath. Iano immediately proceeds to shoot a guy who “was thinking about” committing a murder, and the crew learns a few hard lessons about Patria—namely, that ideation and intent are punished as harshly as actual deeds, and that telepaths on Patria are made, not born, volunteering for an elite squad called the Mindcrime Unit. The cops and government want the rebels quashed, while the rebels demand nothing less than the resignation of everyone on the Patrian Council and the total dismantling of the Mindcrime Unit. The whole mess has Kirk and his crew walking on eggshells to avoid violating the Prime Directive in several ways, some of which are genuinely surprising.

The last time we checked in with Simon Hawke was for his debut, the TNG novel The Romulan Prize. Although I reviewed that one less than five months ago, I remember virtually nothing about it, except that I mildly enjoyed it overall, with the Romulan antagonist being a particular high point. I think I’ll find The Patrian Transgression a bit more memorable. In its careful consideration of all the possible ramifications of the Prime Directive, it reminded me of another TNG novel I enjoyed quite a lot, Terry Mancour’s Spartacus. That level of insight is imparted to the characters as well. Many of the featured Patrians have a good bead on the planet’s situation, and although the nature of it is complex, their articulate assessments make it easy to follow.

Expectations are capably subverted whenever longstanding Trek tropes come into play. As soon as you hear the rebels have Klingon disruptors, your first thought is bound to be Gee, I wonder who supplied those. Yet you realize there has to be more to it as you get deeper and deeper into the story without meeting a single Klingon. Relatedly, there is somewhat of a minor whodunit element centered around the question of who has a vested interest in keeping this dynamic going, but Hawke made it almost completely unguessable by baking the key to the answer into the structure of Patrian society itself. This was either going to be very clever or very irritating, and thankfully, it turned out to be the former. And it’s rare enough for McCoy to be the one who gets the one-episode stand, but his fling with Secretary Wing is marked by such a mature understanding of consent and work/life balance that, astoundingly, it counteracts almost all the innate yuckiness of an old wrinkled codger hooking up with a P.Y.T. The only real remaining flaw in that part, then, is that it takes McCoy out of the action at moments when his character beats and talents might be appreciated, though it does make for an amusing scene where Kirk knocks on his door during what is clearly mid–fun-times.

Despite its gift for interesting subversions, I’d hesitate to call The Patrian Transgression top-shelf material. I had quite a bit of fun reading it, but it never really blew my mind. I’d say it falls squarely in the topmost sub-tier of solid competence, where it should still be one you add to your reading list if you want a comprehensive picture of the strengths of Trek literature. The Prime Directive is dicey even in theory, and not all authors (or screenwriters) handle it properly. But Hawke is certainly one who can posit nifty ideas and then tease them out to fascinating conclusions.

I recommend The Patrian Transgression. This is the kind of book where you can tell the author gave a great deal of thought to a very intricate situation, and the effort paid off. Some expectations regarding common Trek tropes are nimbly subverted, and the book overall shows an above-average competence. It probably won’t change your life like Anjor’s rodent steak, but it’s definitely well worth reading.

NEXT TIME: Jake and Nog bum a ride to Bajor in Stowaways