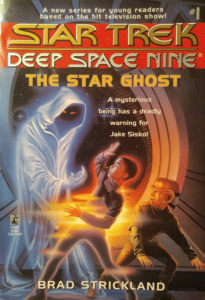 This week, when Molly O’Brien’s imaginary friend turns out to be real, Nog fears a visit from the Ghost of FCA Future. But when Jake trusts the specter and crosses over, he’ll have to figure out how to turn clipping back on to warn his dad about a bomb. Do Japanese pitchers ever pan out? How do Ferengi ground their kids? And which crew member would narc on you for downloading ROMs? All this and more in The Star Ghost, the book where oo-mox ruins everything.

As you may recall, the previous three books targeted at young readers followed Worf adjusting to life as a cadet at Starfleet Academy. Which is more or less relatable, if maybe not completely universally so. Plenty of people know or remember what it’s like to attend a new school, struggle to fit in in an unfamiliar setting, figure out how best to do right by their cultural heritage, etc. Owing to the nature of Starfleet, however, the character growth must share space with the call to adventure. As mostly good as those books were, Worf’s personal journey did at times get muddled or lost among the action.

But as the kid-lit subseries leaves Earth for the time being and enters orbit around Bajor, a new potential problem presents itself. The rigors of Starfleet Academy necessitate a more fundamentally serious brand of storytelling. Whereas the minute you get to Deep Space Nine and start following normie kids with normie lives, they’re talking about ghosts? Like, what, are they trying to shake a few peaches out of that Goosebumps tree? Luckily, Deep Space Nine has the two most well-written and emotionally grounded teenage characters in all of Star Trek, and in the hands of an author who can use them well, even a story like this can be kept firmly on the rails.

Molly O’Brien is holographically air-painting a tall, thin figure in a silver cloak with glowing red eyes. Keiko should probably take a more active interest in her daughter’s activities, because her explanation that this is just Molly’s imaginary friend “Dhraako” is way too nonchalant. Nog and Quark, on the other hand, are closer to the correct amount of freaked out, claiming the figure is a “Ferengest”, which, per the station computer, is a “vengeful ghost that haunts its descendants when they violate Ferengi customs or ethics” and curses them with bad luck in their business ventures. Jake tries to appease Nog with logic, which works for a short time—until they both see it in the flesh, so to speak.

While Nog turns to the adults for help, Jake, clearly unfamiliar with the concept of stranger danger, follows Dhraako to a lower deck, where it turns him semi-corporeal like itself and warns him that the station is about to be destroyed. The Cardassians are in the neighborhood negotiating for the privilege of using Deep Space Nine as a way station for their mineral freighters, and one of their number, Gul Chok, has planted a bomb in the fusion reactors. If the negotiations don’t proceed to his liking, he’ll just light the place up like a Christmas tree and do the cool-guy walk away from the explosion. Jake not only has to warn his dad about it, he also has to figure out how to phase himself back to a solid state so he can do even that.

The only real flaw in this book—and it’s not even that big of one—is that it comes with a light load of cliche kids’ media baggage. Jake is a decidedly more “normal” kid than your average Academy cadet, so you get occasional instances of that thing where middle-aged authors try to imagine what kinds of things everyday kids struggle with. Dad has to contend with the Cardassians, but I have to deal with—MATH HOMEWORK?!? This alien food is gross! It tastes like VEGETABLES!!! I’m trying to save the entire station, but I’m GROUNDED?!!?!?!!1!?!? The adults are also more or less useless, though not in the malicious way the more flippant kidcoms like to make them out to be. It’s all very in-character and actually executed quite well.

In fact, The Star Ghost features what I consider the most authentic representations of Deep Space Nine characters I’ve encountered in a book to date. Believe me, I’m as shocked as you are. Dax and Bashir are conspicuously absent, but everyone else who shows up passes the sniff test. Jake and Nog carry the book capably in that respect as well; in particular, their banter in the early pages establishes a fun tone for what’s to come and really sells how deep their friendship is despite its relative newness.

I have to admit I’m a little floored by how good this book was. It smuggled a solid story in a deceptive wrapper. There’s nothing I love in this project more than being surprised or proven wrong, and this one really got me. It’s so easy to scoff at YA literature and assume it can’t provide the thrills and satisfaction of a more “mature” novel. This book could have been stoopid with two O’s. I mean, really: ghosts? But it gets as out there as any good sci-fi, it maintains a deft balance between fun and serious, and it even earns the modest emotional tug it goes for at the end. I don’t gamble, but if you had told me, “The Star Ghost will be your favorite Deep Space Nine book yet,” even I would have bet against that. Yet here we are.

I strongly recommend The Star Ghost. It just goes to show you, great Trek can come in any kind of package. This one provided a great adventure without falling prey to excessive wackiness or other potential pitfalls of its genre. The Starfleet Academy books got Trek kids’ books off to a strong start, but this is the first one that really pops.

NEXT TIME: Kirk and crew must think happy thoughts in The Patrian Transgression