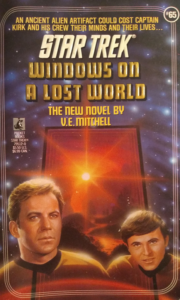 This week, while looking for artifacts in the Careta system, the Enterprise finds a door someone clearly wanted kept shut. But when Kirk and a few others pass through, they find themselves transformed into the evil alien crabs that built it. Now Kirk must either be a hero in a half-shell or lose his own consciousness to the powerfully xenophobic racial memory of his host. Will lady Yoda learn a lesson in humility? Are baggy pants still a sign of societal decay in the 23rd century? And why can’t anyone spell “y’all” correctly anymore? All this and more in Windows on a Lost World, the book that paints with all the colors of the wind.

Windows on a Lost World
Author: V.E. Mitchell
Pages: 275
Published: June 1993
Timeline: Year 3 of the five-year mission, prior to “For the World Is Hollow and I Have Touched the Sky” (S3E8)
Prerequisites: None

A team of civilian scientists tags along on an archaeological expedition to the Careta system. Everyone gets a funky vibe from the fourth planet, and the readings don’t help, showing that the ruins are twice as old as originally suspected. Something is down there, but readings indicate it doesn’t exist. Clearly, someone wanted to make sure it never got found. That impression is further reinforced by the giant cube surrounding the artifact that’s hard as all get-out to open, not to mention the fart cloud that knocks them all over once they finally do pry it open.

After most of the team recovers from the gas attack, the tests continue. Tests, tests, tests. For a while, it feels like all this book is going to be about is tests. Even after Chekov and Dr. Talika Nyar, the scientist he’s been assigned to assist, fall into the window-like object, they run more tests that reveal more nothing. Had I been reading this book solely for my own leisure, I might have given up on it pretty early. That would have been a mistake, however, because finally, amid Spock’s objections, Kirk, echoing the reader’s frustration, charges through the frame himself. And that’s where the book finally starts getting interesting.

Kirk and the others are not only transported by the apparatus, but transformed by it as well, into members of the Kh!lict, the alien crustaceans that invented it. Kirk essentially rides shotgun in the Kh!lict’s bicameral brain, his consciousness occupying the higher brain while the lower brain runs the show by default. Kirk quickly finds he can fairly easily take the wheel at will, but decides to hang back until he gets a better feel for how the alien arthropod’s body works.

As Kirk carefully observes the lower brain’s reactions to its surroundings and external stimuli, he and we learn more about the Kh!lict. That they believed themselves the only intelligent life in the universe. That the transit frame turned them into Kh!lict because the Kh!lict believed only Kh!lict, being again the only intelligent life in the galaxy by their own estimation, could or would ever use it. That the Kh!lict were one of the most deeply xenophobic and savage races to ever exist, slaughtering any civilization they came across. Continued habitation of the higher brain yields one unsavory revelation after another, and if Spock can’t figure out how to revert the transformed crewmen to their human forms, the racial memory of the Kh!lict will consume them entirely.

More than most Star Trek novels, Windows on a Lost World favors exposition over dialogue, with any given page you randomly flip to bound to yield bulky paragraphs and walls of text. Normally this level of telling-not-showing would be a little annoying and gaudy, but given how disorienting this particular alien milieu is, it’s instead rather comforting to watch with a little bit of anthropological detachment. You can tell Mitchell has considered everything about the ancient Kh!lict very thoughtfully, from their anatomy to their attitudes. You rarely get such a comprehensive deep dive on a civilization that’s an original creation in a book of this length, and I for one am here for it.

I’m also here for the unnerving alienness of Careta and the Kh!lict, a hallmark of all the best Trek adventures. Any attempt to get really deeply weird is usually going to be at least interesting if nothing else, and it doesn’t get much weirder than Kirk and Chekov (among others) turning into giant crabs. Watching Kirk figure out how to effectively communicate with non-Kh!lict via the species’ Hypercolor carapace is fun, and I also enjoyed the push and pull between higher-brain Kirk and the instinctual drives of his host’s lower brain; a segment where Kirk is basically just along for the ride while his host pursues a female mate is pretty funny, not to mention a prime example of “just when you thought this situation couldn’t get any more bizarre”.

Windows on a Lost World isn’t without flaws. Pacing issues plague both the beginning and the end—the latter having to move too quickly to properly wrap up, and the former threatening to prepare the reader for a deathly boring parade of run-of-the-mill surveying. There are also some undercooked developments, most notably involving Dr. Lassiter, one of the archaeologists, who has some kind of heightened empathic sense that seems for a hot second like it might eventually be useful and/or important but never is. A potentially interesting chance for growth of understanding between Chekov and Talika Nyar, where Nyar completely disrespects Chekov because her matriarchal species considers all men worthless garbage, is cut off at the knees by their tumble through the transit frame and only receives a pat resolution in the final pages. Despite some minor missteps, however, the raw premise and the in-depth exploration of an ancient and appallingly evil alien culture are enough to carry the day. If you’re looking for a potent dose of weird, Windows on a Lost World will fit the bill nicely.

It’s been a minute since we saluted the bravely fallen in one of these reviews, but this week, I have to pour one out for the two security officers who die while inhabiting Kh!lict bodies. One’s host reacts so volatilely to being transported aboard the Enterprise that a phaser on light stun kills it, and the other gets his shell cracked open and the contents chowed down on by a ravenous Chekov-crab. What a way to go, huh? Naturally, not all officers can be made of the same stern stuff as the formidable James T. Kirk and bring their force of will to bear on a totally unprecedented mind-transference situation. But to die probably totally frightened and confused in a body so unlike your own, never having even the first inkling of what’s going on? Chilling stuff. No thank you.

I recommend Windows on a Lost World. Despite a slow start and some elements that never fully develop, it eventually reveals itself to be one of the weirder entries thus far. What would normally be an annoying amount of exposition instead creates a buffer of anthropological detachment that makes it fun to watch Kirk try to get the hang of his crab body. The Kh!lict are also well explored, and they make a frustrating antagonist despite the incredible handicap of being technically extinct. I thought, based on the first 80 or so pages, that this one was going to be boring and was pleasantly surprised. If you want to see Kirk communicate with Spock in Morse code via a color-changing carapace, this is the book for you.