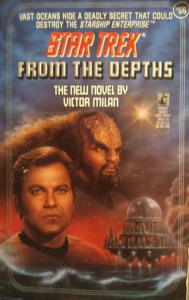 This week, the Enterprise gets a request from the planet Okeanos to come pick up their humans. But where Kirk wants to hear all sides first, his civilian guest prefers a less measured approach. Matters are further complicated by Klingons supplying weapons to help take down the human settlers. Who holds the true claim to the planet? Is World War III happening now or later? Has the civilian commissioner ever interacted with other humans before? All this and more in From the Depths, the book that will press all your “yuck” buttons at once.

From the Depths
Author: Victor Milán
Pages: 280
Published: August 19931This is a busy month for Pocket Books: it’s the first month in our schedule with four different releases. Whenever a single month features lots of different releases, I’ll just do them in series order, with numbered installments covered before event novels, if applicable (which it is here).
Timeline: Immediately after The Tears of the Singers (TOS #19)
Prerequisites: “Friday’s Child” (TOS S2E11) for background on Kain

The Susuru, the vaguely equestrian inhabitants of the planet Okeanos, have requested the Federation’s help in ridding their world of a plague—i.e., the human settlers they share the world with. Hostilities, which have remained at a steady low boil for about forty years, are reaching a head, and the Susuru make clear that if the Federation doesn’t get the humans out of there, they’re going to do it themselves—with nuclear missiles.

For their mission, the Enterprise is saddled with civilian assistance—in this case, a lady named Moriah Wayne, whose title as commissioner proves that even almost three centuries later, nepotism is alive and well in Gotham City. Oh, wait, sorry, she’s not that commissioner; specifically, she’s the commissioner of the Federation Commission for Interspecies Affairs. Wayne gets off on the wrong foot with the senior staff, a rocky start that is attributable to the fact that she is equal parts petty, condescending, and stupid. She almost nails Sulu on a career-ending felony charge, then later wonders with a straight face why he doesn’t want to look at her or speak to her. She has virtually no grasp of the malleability of protocol, or indeed of the most basic aspect of interpersonal interaction. But that’s only the beginning of Moriah Wayne’s issues.

The Susuru are pretty extra, so Kirk decides it might be reasonable to hear out the humans, who call the planet Discord, before hauling them off the only world they’ve ever known. Wayne, however, is far more credulous, instantly believing the Susuru wholeheartedly and ready to unequivocally declare the Discordians in the wrong. She also calls Kain, a Klingon who has been supplying the Susuru with weapons to tip the scales in their favor, a man of “great integrity and sensitivity”, a laughably unsubtle “I like the way Snrub thinks“-level blunder that immediately tips off who she’s really working for.

Despite the actions of Kain and the Susuru, it’s Wayne I consider the book’s true villain. That said, her biggest problem as a character is that she has no coherent philosophy. She has one job—to relocate those settlers—and she is hellbent on seeing it through her way regardless of how new information changes the situation. The Susuru say they’re being attacked, and she instantly goes all in on the flop. Despite being remnants of Khan’s 20th-century reign of terror, the humans have decided to continue the practice of genetic engineering among themselves—another strike against them in Wayne’s eyes, never mind that they don’t like seem like such bad people regardless of how decades of Federation laws and attitudes have told Kirk et al. how to feel about such people, or that they appear to have thought their decision through quite thoroughly. Her bone to pick with technology in general is not realistically realized in any sense. Milán even sprinkles in a little casual man-hating at one point, and while there are definitely valid criticisms to be made about the male predominance in TOS, that’s not what’s happening here. Obviously Wayne is not on the level and is jumping on any excuse to tar the settlers and thus justify her actions, and other factors like corruption among top Starfleet brass play a role, but even considering these factors barely makes her unhinged behavior make any more sense.

Annoying civilians make for a tough enough read as it is, especially when the author leans so hard into their awfulness. But there’s an especially slimy cherry topping this particular sundae. Wayne has sort of a thing for men in command; she makes it with Kirk and seems to have it bad for Kain as well. Combined with the abuse she’s said to have suffered at the hands of her Federation councilor father, she suspected, anecdotally and more than once, to have—book’s words, not mine—”daddy issues”. This is territory I would put well outside of one single genre fiction media tie-in’s purview, as well as preferably not in the hands of a male author of the skill level I’m deeming Milán to be based on this novel. Everything about this angle just reads yuck, yuck, yuck. I’m not going to pretend I’m any expert about it, but on a gut level I did not cotton to this aspect of the book at all.

There were parts of the book I did like. The Discordian settlers are more layered and interesting characters; I especially enjoyed the platonic mutual respect between Spock and Dr. Mona Arkazha, one of the more radically altered humans. I think had the commissioner not been such an outsized presence and focal point, there would been more time and space to develop a more compelling conflict involving these characters, which would admittedly probably been harder to pull off but ultimately more satisfying. The nature of both the Discordians’ and Susuru’s arrival on the planet is intriguing world-building, but a full exploration is sadly shunted to the book’s final pages. I think a decent enough story could have been carved from this marble, but all it took was one hot mess of a character to tank the whole thing.

I strongly do not recommend From the Depths. The character of Moriah Wayne swallows other more interesting characters and plot elements whole, and the author traffics in armchair psychology that is way out of both his and this story’s depth. If there was potential for a good story here, it went out the window from practically the word “go”. A poorly handled effort that may well leave you feeling like you need to take a shower when you finish.

NEXT TIME: McCoy confronts his past in Shadows on the Sun