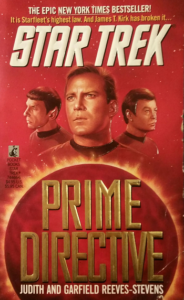 This week, Kirk breaks Starfleet’s most well-known and revered regulation, and this time he can’t simply chalk it up to bad writing. But his senior officers insist that Starfleet doesn’t know the whole story, and they’re willing to punch admirals, serve jail time, and hijack Orion slave ships to prove their case. As the individual crew members converge on the blockaded world where it all went down, things indeed begin to smell fishy—or more accurately, mildewy. Is this an alternate continuity? Has Spock joined the DSA? Will Sulu ditch his friends and become a full-time pirate? It’s the book that’s infringing on your God-given right to lower gravity.

Prime Directive
Authors: Judith and Garfield Reeves-Stevens
Pages: 406
Published: September 19901Hardcover release. The mass market paperback, shown above with its far superior cover art, was released a year later.
Timeline: During the fifth year of the five-year mission
Prerequisites: Prominently features characters from “Who Mourns for Adonais?” (S2E2) (Carolyn Palamas) and Star Trek III: The Search for Spock (Styles), but otherwise can be enjoyed with only basic character knowledge

As Prime Directive opens, we’re introduced to Sam Jackson, a rugged chap who seems like a pretty all-right fella, at least by his Tellarite boss Glissa’s estimation. Glissa is impressed by Sam’s knack for leadership and his understanding of alien cultural norms, which far exceeds that of the average rockrigger. But her dream employee turns out to be too good to be true: soon enough his true identity, James T. Kirk, comes to light, and even saving a couple of Tellarite pups from falling out of an asteroid and into the vacuum of space isn’t enough to counteract his rock-bottom reputation. Glissa is forced to send Kirk on his way, unable even to guarantee his personal safety.

Such is the life of James T. Kirk in Prime Directive: once a legendary starship captain, now a disgraced planet-killer, left without a pot to piss in, unhireable even for the least desirable dregs of minimum-wage grunt labor. Kirk stands guilty of revealing the existence of alien outsiders to a population that wasn’t ready for such a momentous societal milestone and for activating the Enterprise’s warp drive while still within the planet’s gravity well, in essence nuking the entire planet.

His senior officers didn’t come out smelling any rosier: Spock resigned his commission after being busted down to ensign; McCoy also resigned after punching an admiral; Uhura is being detained in Federation jail for contempt of court; and Sulu and Chekov skipped town together and are eking out a miserable existence on an Orion freighter. Only Scotty, having not been on the bridge at the time of the incident and thus not implicated, remains in the employ of Starfleet, but he’s no happier for it: he’s being forced to lead the refit of the Enterprise and answer to Lawrence Styles, whom you may remember from Star Trek III as that stuffy, obnoxious prig who carried a swagger stick. (He’s only a lieutenant here rather than a captain, but no less irritating.)

But they all insist that something outside their control had a hand in the disaster, if only they can get anyone to listen. Spock appears to be casting his lot with a fringe political group that wants to abolish General Order One altogether, citing it as morally indefensible. Despite being punched in the face by Dr. McCoy, a certain vice-admiral might be sympathetic enough to their plight to be of real assistance. And Kirk happens upon a surprising ally in Anne Gauvreau, a freighter captain who hires him for more than just his Microsoft Office skills. Working on borrowed time, little by little they find bits of evidence to support their claim, although the eventual reveal resides way outside of anything you’d expect from all the bureaucratic de-tangling leading up to it, and leads to a final act that really gets into some spooky alien territory and lights up the imagination.

Prime Directive is broken up into four parts. Part One is the “where are they now” segment; Part Two details the events leading up to the disaster, keeping the reader on edge with a series of clever bait-and-switches while they wait for the other shoe to drop. Part Three gets the band back together converging on the now-blockaded Talin IV and begins working toward the climax and resolution, which is where things start getting really wiggy. Last but not least, the very short Part Four serves as an epilogue without explicitly naming itself as such.

What is immediately striking about Prime Directive is how fearless it is. A number of books begin by dropping the reader immediately into the midst of a space battle or some such, but this one starts neck-deep in the doodoo. Prime Directive has such high stakes, it makes other Star Trek books look like an episode of Paw Patrol. There’s never a moment where even a minor slip can’t bring the entire house of cards crashing down; even activities that seem mundane are mined for every possible thrill.

Memory Prime, the Reeves-Stevens’ previous and first Trek novel, was decent, but had a tendency at times to become overly abstract and/or byzantine. Prime Directive doesn’t suffer from that misstep one bit. Even at 400-plus pages, it’s all killer, no filler. It’s much easier to follow, and manages to be so without sacrificing that quality of true alien weirdness that distinguishes the novelverse’s most unique creations. Far from succumbing to a sophomore slump, this second outing really finds the couple hitting their stride.

Some of the older, more fan fiction-ish books would fall into this myopic trap of intertwining the destinies of Kirk and Spock as a fact of the universe, focusing on their relationship to the exclusion of all others. Prime Directive may well be the first novel to work all seven senior officers (as well as a few beloved tertiary characters) into that fold in perfect balance, and it never forgets for a second that all of these characters form an unbreakable team, each one essential to the legend in their own ways. How well a Star Trek novel showcases the full ensemble is often, perhaps not so coincidentally, directly proportional to how good and/or fun it is, and Prime Directive certainly represents one of the highest peaks of that ratio.

“Event novel” isn’t just a catch-all term for a Trek novel without a number on the cover. When you pick up an event novel, you have a reasonable expectation that the story within isn’t just your average romp, and that it truly merits the descriptor of “event”. Prime Directive more than earns that word, as well as another one that I don’t toss around lightly at all: it’s epic. It starts at the lowest low, and over the course of 400 pages, claws its way to the highest high, making for one of the most incredible Star Trek journeys published to date.

I give Prime Directive 5 out of 5 broken swagger sticks. Without question the best event novel covered on this site so far, Prime Directive brings the heat from the very beginning and never lets up for a second. It’s bursting at the seams with action, tension, and the kinds of little details that really put Star Trek over the top as a one-of-a-kind fictional universe. Marvelous character work all around. An absolute delight, and one of the top must-reads for anyone who wants to obtain a solid grasp of the qualities that make the TOS crew so legendary.

NEXT TIME: Geordi and Dr. Selar see through The Eyes of the Beholders