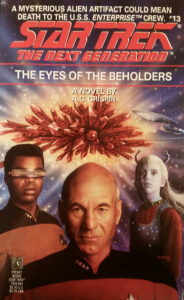 This week, while Picard allows a mysterious beam to pull the Enterprise to its source to get to the bottom of some recent disappearances, the rest of the crew experiences a different kind of drag as Data goes around looking for critiques on the romance novel he’s writing. Meanwhile, a familiar face tries to find the best living situation for her young charge, while a mound of space crystals is racking up a hefty pile of bad Yelp reviews. Why did Geordi make the cover? When is having Tellarite vision a good thing? Who will be the one to break the bad news to Data? It’s the book that you have to darken the ports to properly appreciate.

Subconsciously realizing it’s the anniversary of the day he got his VISOR, Geordi wakes up and can’t get back to sleep, so he decides to drop in on Data. And since it’s a new week, Data naturally is pursuing a new artistic pursuit: this time, he’s writing a book. Specifically, he’s writing a potboiler romance novel, and Geordi earns the dubious honor of being his first reader.

Meanwhile, the Enterprise is called away from a mapping mission to investigate some mysterious disappearances on a new Federation/Klingon trade route. It’s not long before the Enterprise itself gets caught in the trap, and rather than burn out the warp engines trying to escape its grip, Picard decides to let the beam drag them to the source. This gives the crew a fair chunk of downtime, which Data uses to get more critiques on his novel.

Whether he was programmed with it or not, Data has all the confidence of the mediocre white male he was built to resemble. Data has based his writing on an analysis of five centuries worth of popular literature, and thus is supremely and absurdly self-assured in the inevitability of his work’s publication and critical favor. But his crew mates all quickly arrive at the same opinion: Data’s novel sucks the big one. In fact, his writing sounds a little like that recent viral tweet about how men write women:

Men writing women characters: She was beautiful but didn’t know it. She was 5’7 and 101 pounds. Her feet were size 3. Her hat size was Infant. She’d never thrown up, even once. Her periods lasted 45 minutes. Her top was see-through.

Maybe I’m just perceiving it this way because of how much it stood out to me, but it is legitimately kind of shocking how much of this book’s real estate is dedicated to Data and his terrible romance novel. Most of my notes for this review were about this story line, a fact that feels elementally wrong due to the fact, which now is likely as good a time as any to mention, that this is the novel’s C-plot.

Let me elaborate. When we use a term like “A-plot”, we’re assigning a level of importance to a narrative thread that is commensurate with how essential that thread is to the overall story. Data’s romance novel, as the C-plot, should take up an amount of space (both on the page and in the mind of the reader) on par with, say, Worf’s chuS’ugh in Power Hungry and A Rock and a Hard Place. However, Data’s ongoing quest to become a Real Boy is a piece of subject matter innumerable authors have found irresistible, and unfortunately it proves too unwieldy for Crispin to handle well.

Luckily, another of the book’s threads is as much comfortably in Crispin’s wheelhouse as the Data one isn’t. You will likely recall that Crispin previously wrote two rather excellent books about Vulcans and their relationship dynamics. She returns to that well here—but wait! you say; there are no regularly featured Vulcans in Next Generation. True, no regularly featured ones—but there are a few, and Crispin plucked one of them, Dr. Selar, out of obscurity and gave her her own full-fledged story line. Not allowed to write about original characters? Shine the spotlight on an esoteric but canonical one. Brilliant!1Though as our next review will demonstrate, the crackdown on OCs appears to be a haphazardly enforced thing anyway.

Dr. Selar, one of many classic Trek roles played by the inimitable Suzie Plakson, is one of my favorite minor TNG characters, seen on-screen only one time, in season two’s “The Schizoid Man”, and referenced intermittently throughout the remainder of the series. I literally pumped my fist and said “woo” out loud when I realized what a major presence she was going to be in this book. Unlike most times where a one-off character gets another day in the limelight, e.g., Mira Romaine in Memory Prime or Carolyn Palamas in Prime Directive, this one is actually legitimately exciting, perhaps due in part to Selar having an alien background, which is always more exotic, but also because she isn’t a total drip who was probably better off left in the past.

A writer looking to go buck wild with character development could hardly choose a better blank canvas than Dr. Selar. I think I’ve spoken before (though I don’t remember when or where) about how concentrating on minor characters that haven’t received much development is an easy yet solid trick for increasing the odds of making a Trek story good. The Eyes of the Beholders offers way more background on Selar than perhaps anybody would ever have thought to ask for. Like a lot of Vulcans in Starfleet, there’s a lot of family discord in her past. She dumped a guy who thought women should put their careers on hold to tend to the house, much to her parents’ chagrin and her intended’s relief. There’s even a pretty solid explanation for why she adopts a male Vulcan naming convention rather than the traditional “T’____” construction for Vulcan females, a discrepancy I actually didn’t notice until reading this book.

Selar’s story concerns her interest in a girl named Thala, a recently orphaned Andorian (her father was one of the 18 casualties mentioned by Picard in “Q Who?”)2“I understand what you’ve done here, Q. But I think the lesson could have been learned without the loss of eighteen members of my crew.” who’s also blind, though slowly acclimating to the use of sensory-net clothing. Neither Selar nor Crusher believes that Andorians, who have outlandishly regressive views on disabled members of their society and how they should be treated, will act in Thala’s best interest. But when she’s offered a prestigious job at the Vulcan Science Academy as the head of bioelectronic research, she suddenly has to choose between advancing her own career or lending a much-needed hand to someone who, while not a blood relative, has come to feel more like family to her than the jerks she left behind on Vulcan.

The Selar thread is by far the most compelling stuff in The Eyes of the Beholders, a fact that’s completely unsurprising given how good Crispin’s previous books about Vulcan family dynamics were. Even in sci-fi, and especially in Star Trek, stories with personal connection and heart will always trump purely abstract shenanigans, and the mystery surrounding the artifact is literally about as abstract as it gets. Also, Thala, crucially, is not a cloying or aggravating character; in fact, children in general tend to be less so in the books, where you don’t have to imagine a whiny, nasally voice if you don’t want to.

That leaves only the A-plot, though in keeping with how whacked-out this book’s sense of plot importance is, it often feels like merely a backdrop for the other two plot lines. The beam that snares the Enterprise drags it to an artifact composed of colors and angles completely foreign to any humanoid race’s abilities of comprehension. Much like the Sackers in The Three-Minute Universe, looking directly at the bizarre artifact makes everyone violently ill; ports have to be darkened and exposure has to be limited. Though the shields offer some protection, the artifact begins causing bad vibes in a gradually increasing number of crew members, as well as giving them vivid dreams of unpleasant memories. Several senior officers’ dreams are detailed in a number of long, italicized passages peppered throughout the text, the most memorable of which is Riker’s, where he remembers dating an older woman in his Academy days and being severely disappointed when she doesn’t want a serious commitment. It’s kind of cute to get a peek at a Will Riker who’s not yet the suave, ultra-confident, chair-straddling man’s man we all know and love. I could have read a whole book of this, but the other dream sequences just sort of washed over me.

Ultimately, the main struggle for Picard is to not have to make the decision to blow up the artifact before determining its true purpose, or before the nightmares and nausea threaten to overtake the crew completely, whichever comes first. The endings all sort of come crashing down the runway, and this is without question Crispin’s messiest book yet, but incredibly, her raw talent saves it from lapsing into awfulness. When she sticks to the things she’s good at, she’s as on her game as she ever was, but when Data starts passing around that romance novel, that’s when it goes off the rails.

In this week’s Ten Forward Toast, we pour one out for Nurse Penelope Johnson. Although tall and presumably physically strong, Johnson is a fragile, timid lady. Usually you wouldn’t expect someone so mousy to bite the dust, so her death is genuinely a slight shock. After a while of reading these books, certain synapses start to fire and you begin to make certain connections, which is a roundabout way of saying that this is sort of like if Vonda McIntyre had killed off Jenniver Aristeides in The Entropy Effect.

I give The Eyes of the Beholders 3 out of 5 badly written romance novels. Crispin’s talent for writing Vulcans remains sharp, but the juicy Selar material gets both bogged down and obscured by the silly Data garbage. It shares the tendency of several early TNG episodes to blow a decent premise and lavish too much attention on goofy ideas and bum subplots, but it’s saved from true badness by Crispin’s pure skill as a writer. This is a little disappointing, as previous efforts have clearly demonstrated she was capable of better. However, you could definitely do worse than to pick this one up, and it’s a solid one-stop shop for a deep dive on a minor but much-loved character.

NEXT TIME: How does one track down an Enemy Unseen?