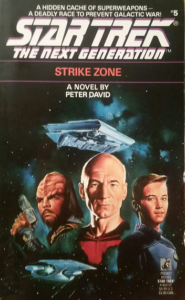 This week, we meet the Kreel, who have spent over a century being the Klingons’ punching bags. But when the Kreel find an abandoned stash of powerful weapons on a backwater planet, the tables turn, and shockingly, the Klingons start to feel like maybe peace, love, and understanding aren’t such bad ideas after all. Meanwhile, Wesley Crusher has a burdensome boy-genius reputation to live up to, and he intends to maintain it by singlehandedly attempting to cure a friend’s terminal illness. How much does Riker’s beard annoy Picard? Did Worf just decide to leave all pretense of professionalism at home today? Do some people deserve to be bullied? And perhaps the most important question of all: does this book have The Knack, or The Rot?

We open by following the Kreel, a race of no-neck knuckle-dragging uggos who aren’t very nice. Part of why they’re not very nice is that they’ve spent over a century getting their collective dicks knocked in the dirt by the Klingons, who would call them parasitic vermin if that wasn’t such an insult to parasitic vermin. But they’ve finally caught a break: they’ve found a stash of incredibly advanced weapons on DQN 1196, an unincorporated backwater planet in disputed Kreel/Klingon territory. And just as soon as they can figure out how these blasted things work, they’re going to give the Klingons a taste of their own medicine.

With their enemies suddenly having access to guns that can knock their ships aft-over-teakettle, the Klingons, unsurprisingly, decide maybe it would be a swell time to open up some peace talks. The Enterprise is enlisted to mediate, and they welcome aboard Kobry, the little ambassador who could, who was instrumental in brokering the tentative peace that now exists between the Federation and the Klingon Empire.

Naturally, things don’t go so hot for a while. At first, the Klingons and the Kreel can’t even look at or mention each other without screaming “Death first!” and spitting—and that includes Worf, who gets a way less harsh dressing-down from Picard than he probably deserves. This is Starfleet, man! But Picard demands order, and slowly but surely, things turn around, and it looks like good times might be around the bend … and then, with a little over 100 pages left to go, the Kreel drop a bomb that really turns the whole thing sour—temporarily for the negotiating teams, but for the reader perhaps somewhat more permanently. As a personal rule, I try not to transcribe huge chunks of text verbatim, but this kind of has to be read to be believed. (CW: rape.)1Second TNG book in a row not only to mention it but also to handle it rather indelicately. One wonders how many early writers thought “new Star Trek series” meant “All right! Time to take on some EDGY stuff!”

Kobry bowed slowly. “A humble servant of the Emperor, as are we all. This is my aide, Gava.”

Aneel looked at her appreciatively. Up, and then down. Then he laughed proudly.

“You remind me of a Klingon woman I raped once.”

Tron lunged forward, even as Riker threw himself against the Klingon to hold him back. “You lie!”

“You’re right, I’m lying!” Aneel shouted. “Actually, it was more than once! And by the end, she was begging for more! She loved it! She—”

I admit I’m still, as of the time I’m sitting down and putting my thoughts together, having a really hard time with this. In the end, I think I’m of two minds about it. Now, Star Trek is supposed to paint a picture of idealism that we would nominally want to aspire to. We (i.e. the human race) have been through the fire and the rain, we’ve come out on the other side, and having really put ourselves through the wringer, we’re now fully committed to peace and reason and empathy and understanding and all those wonderful things that once seemed like pie in the sky. But writing a species this nakedly reprehensible really, really strains the outer limits of that kind of forbearance. After Aneel went for that low blow, the Kreel could have all been eaten by dinosaurs for all I cared. A certain line of logic could be used to argue that the Klingons were right to have kept the Kreel under their thumb this whole time. Or is David issuing the reader a challenge? That is to say, are you still willing to put your moral money where your mouth is when the other guy is trying to push your buttons by talking about how much he loved raping your daughter? I’m still not totally convinced the latter is what’s happening here. Strike Zone is so raw and ramshackle in other areas as well that I can’t quite convince myself that this was a challenge issued with specific intent. It’s hard to imagine the sort of soft “we’re going to keep talking it out and hoping things get better” ending we eventually get holding much water here in 2018, where we now know all too well the inadequacy and danger of both-sides-ism.

Meanwhile, in the novel’s other big storyline, Wesley Crusher’s friend Jaan, a Selelvian, comes down with a terminal illness known colloquially among his people as The Rot. Jaan is pretty tore up about it—Selelvians are supposed to live about 200 years, and instead he’s getting cut down in the prime of his adolescence by rotten hereditary luck. Bitterly resentful of his reputation his giant brain and acting ensign status have earned him, Wes decides to crank it all the way up to eleven by borrowing a bunch of Dr. Pulaski’s lab equipment and trying to find a cure. Pulaski tries to tell him that the Federation’s inability to find a cure for the Rot has not been for lack of trying, but Wes is not having it.

Unfortunately, Jaan is also a giant trash fire of a person. Selelvians also have an ability they call The Knack, a kind of semi-empathic ability to persuade people to do what he wants them to. Jaan does exactly two things with The Knack: 1) attempt to force Deanna Troi to have sex with him (in her only major appearance in the book), and 2) drive Wes to devote all his time and faculties to curing The Rot—or so he thinks.2He also yells at a friend of his and Wesley’s for telling him exactly what he had hoped to hear instead of the empty platitudes he fully expected to receive, and never apologizes. With the exception of Pulaski and maybe Gava, women have an unfortunate tendency to get discarded in this book.

Strike Zone is an incredibly raw book, at least as Star Trek goes. But the true nature behind Wesley’s frenetic single-minded desire to cure The Rot culminates in a final scene between him and Picard that brings all the crazy shenanigans immediately into focus and ties deftly into the history of the character. I don’t mind saying it’s the closest I’ve come to tears since The Wounded Sky, and it’s why I can’t bring myself to write the whole thing off. The wild unevenness of the book may have produced easily hateable characters like the Kreel and Jaan, but it also gave me something that made me look forward to reading later Peter David books that demonstrate that potential more strongly and with greater frequency.

Reading more of Peter David is exactly what we will be doing a lot of in the coming months and years. His is a name that looms large over Trek literature. Most notably, he wrote the New Frontier novels, many of the Starfleet Academy books geared toward younger readers (which, yes, we will be covering), and of course many standalone TNG and TOS stories, including The Rift, one I read as a kid, remember almost nothing about, and look forward to revisiting. As for Strike Zone, since its title readily invites baseball analogies, I’ll say that as a pitch, it’s probably more like high and outside, but it’s the kind of pitch that zooms so fast over the plate that anyone with eyes can see that the pitcher will be amazing once he learns some control.

I give Strike Zone 2.5 out of 5 cans of Orange Crush. This is a book of exhilaratingly high highs and excruciatingly low lows. There were points where I absolutely loved this book and there were points where I wanted nothing more than to throw it at a wall, and together they kind of shake out somewhere in the middle. Peter David’s debut is a bumpy ride, but you can’t say he didn’t come out swinging for the fences, and it did make me think, so I’ll give it that. There’s plenty of room and time for improvement though, as his is a name that will not be going away anytime soon in the course of this project.