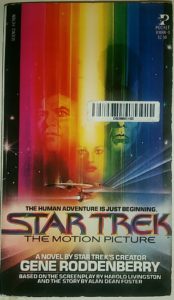 The Pocket Books universe begins with the novelization of Star Trek: The Motion Picture, written by none other than the Great Bird of the Galaxy himself, Gene Roddenberry. Lest you think this is something worth getting excited about, I would advise you to temper your expectations.

Star Trek: The Motion Picture
Author: Gene Roddenberry
Pages: 252
Published: December 1979
Timeline: After TOS
Prerequisites: None1This can be safely assumed to imply “aside from general familiarity with the series”.

Star Trek: The Motion Picture represented the series’s maiden voyage to the silver screen. Originally, it was going to be the pilot for a new TV show called Star Trek: Phase II, which was to be the flagship series of a new TV network by Paramount, but then Paramount backed out on that idea, and the pilot for Phase II was reworked into the script for The Motion Picture.

The Motion Picture also marked the series’s big return to the limelight, having at that time been absent from the collective pop culture consciousness for a full decade (or just six years if you want to count the Animated Series). That ten-year hiatus is important to keep in mind, because the context packed in it helps ease the annoyance of some things people hate about this movie, most of them having to do with why this story moves slower than a tortoise with a hernia.

If you’ve never seen Star Trek: The Motion Picture, it’s a hair over two hours long but feels like six. The first 45 minutes consist of Kirk all but blackmailing his way back into the captain’s chair after getting bored of his promotion to Admiral (which effectively turned him from a hotshot captain on the bleeding edge of frontier exploration into a desk jockey) and seizing on the giant cloud approaching Earth as an opportunity to relive his salad days, along with some lavish, indulgent shots of the Enterprise in spacedock that are like the opening shot in Spaceballs that spans the entire length of Spaceball One, except these are longer. The rest of the runtime plays out more or less like a regular episode of the TV show (a specific one, actually: season 2’s “The Changeling”), but with more rainbows, interminable shots of the Enterprise moving deeper into the cloud, and characters people don’t really care about.

There are actually perfectly reasonable explanations for most of this movie’s shenanigans. For example, Decker and Ilia were prominent characters in the Phase II pilot, and were played both there and here by Stephen Collins and Persis Khambatta, respectively. When the series fell through, their roles transferred to the movie more or less unscathed as kind of a consolation prize, which explains why two people no one had ever seen or heard of got more lines and screen time than fan favorites Scotty, Sulu, Uhura, and Chekov combined.

And yes, the movie spends an ungodly amount of time just staring at the Enterprise from every possible angle. But think about the fans who went to see the movie in 1979, who hadn’t seen the show in ten years, and were finally getting to see the Enterprise, a ship they’d previously only seen on their tiny fuzzy television sets, in stunning detail on the big screen for the first time. They were probably really revved up to see their favorite ship and all their favorite characters back in action, even if they were wearing dorky uniforms (which everyone hated, and still mostly does, rightfully so, though you could argue the look was actually vindicated by the rise of the 21st-century Apple aesthetic). These sorts of things might be difficult to sit through and put up with when viewing the film in the present day, and I’m not saying they’re good or totally defensible decisions, but all things considered, it’s hard to say the victory lap wasn’t earned.

Still, it’s little wonder the movie got stuck with the derisive nickname “The Slow Motion Picture”. And that glacial pace translates to the book as well: it takes ten chapters—nearly 100 pages—just to get into space, and after that, it just sort of gallops along, and there are entire chapters where not a whole lot happens and nothing moves forward significantly. The first time I read this book, it took me almost three weeks to get through it. I really had to make myself press on to finish it.

The pacing isn’t the only problem. I’m hardly a prude, but Roddenberry’s yen for the female form quite clearly intrudes upon and suffocates his writing. Over and over, he lingers on prurient observations. Just looking at a hologram of his colleague and one-time lover Admiral Lori Ciana, Kirk “could feel the slight pressure of his genitals responding to those memories” (p. 32). I’m aware of Kirk as a man who has lots of sex, but I don’t want to be in his brain while he reminisces about it. When Spock goes to meditate in the ship’s recreational alcoves, he overhears humans having sex. And when the probe assumes Ilia’s form, you might reasonably believe that John Updike somehow turned in a cameo for one page (178) as Roddenberry describes her as “almost unbearably lovely in her nudity” and flaps his pervy gums about her “impossibly lovely, hard-tipped breasts”, and how Kirk can’t help but keep “bringing his attention back to her naked body”. And he still manages to come back to it sporadically in the pages ahead! None of this comes across in the film, so it’s extra weird for it to be in the book.

And then there’s the italics. MY GOD, THE ITALICS. You can’t swing a dead sehlat without running into entire paragraphs of italicized text. There are so many italics, it would send Jerry Holkins into a diabetic coma. Most italicized passages are written in the third person, and though you can also tell that they’re supposed to be reflecting the thoughts going through the characters’ heads at that moment (as italics normally do), it’s all incredibly clumsy and sends the text spiraling into histrionics, and in general casts a really amateurish pall over the writing.

One thing you would want the novelization of a movie to do is fill in any gaps in your understanding of certain elements of the film, and this is one area where The Motion Picture: The Novel actually performs admirably. Pretty much anything in the movie that you can imagine as a plot hole or a non sequitur is explained to satisfaction in the book. Roddenberry clears up the mystery of those goofy belt buckles (they’re scanners that constantly upload updated vital signs to sickbay), adequately covers that weird line out of left field from Ilia about her oath of celibacy being on record with descriptions of Deltan pheromones and what they do to humans (again, leaning a little too hard on the sexual aspect in the explaining), and generally acquits himself rather well in the process. It’s not enough to save an overall bush-league effort, but it’s something.

Star Trek: The Motion Picture: The Novel: The Squeakquel: The 3-D IMAX Experience answers some questions the movie raises (but then raises some different ones of its own), and it may have served a solid purpose in its day if you missed the theatrical run and didn’t have HBO at the turn of the 80s, but Roddenberry’s textual telling is hard both to read and to want to read, not to mention lurid and gross. Completionists only need apply.

Roddenberry never wrote another Star Trek novel, and given how messy this one is, it’s not hard to see why. In its own way, the book is as hard to read as the movie is to watch. That does mean, however, that it’s the only Pocket Books novel that counts as canon. From here on out though, it’s all extra-canonical, doesn’t-technically-count adventuring. Even the other movie novelizations.

NEXT TIME: The Entropy Effect