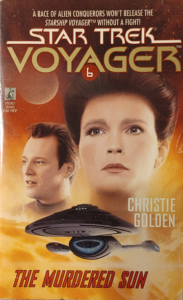 This week, when Voyager meets a peaceful people whose sun seems to be prematurely dying, Chakotay gets a bad case of the Prime Directive blues. But when a violent empire turns out to be behind the star’s rapid aging plus a few other atrocities, Janeway takes the kid gloves off. Can Ensign Kim figure out the identity of the Masked Singer? Can Tom Paris pass sensitivity training? And is there a way home inside the Sun-Eater? All this and more in The Murdered Sun, the book that’s a riddle inside a mystery inside an enigma inside a gravity well.

Voyager finds an anomaly that might have a way home inside, but it’s surrounded by ship debris and guarded by a buoy placed by the Akerian Empire, which warns them to beat it. Neelix says to stay well away from the Akerians, but since when has Janeway ever taken that advice? So they hang around and study the “concavity”, as Tuvok calls it. Something about it doesn’t sit well with the Vulcan; although it’s gorging on energy from the nearby star, turning it prematurely into a red giant and threatening nearby planetary populations with annihilation within 25 years, the concavity’s gravitational pull isn’t strong enough to siphon that much hydrogren across the three trillion miles it’s covering.

They meet the inhabitants of Veruna IV, a gentle race with a makeup somewhere between reptilian and mammalian that calls the concavity Sun-Eater. Chakotay is immediately taken with the Verunans, keying in on several clues that suggest strong common ground with Native Americans. He yearns to help, but of course, that pesky Prime Directive has his hands tied. Or at least it does until Akerian ships emerge from the concavity guns a-blazin’, at which point Janeway declares all bets off. Voyager takes it pretty hard on the chin in the ensuing skirmish, underestimating the Akerians’ graviton beam weapons, but they ultimately prevail, and their effort buys the Verunans a few days to figure some things out while the Akerians limp home and plan a renewed assault.

The Verunans are pretty much resigned to their planet’s impending death and don’t want any huge favors; really, they’d just like to rescue their comrades who are enslaved by the Akerians on a planet inside the concavity, so that they can at least die free and not as slaves. Janeway agrees to provide shield cover for their attempt to infiltrate the compound, and Chakotay and Paris work planetside to get some ancient ships ready for the raid. In the meantime, Tuvok and Kim unearth the history of the Sun-Eater and the planet inside, culminating in a game-changing discovery about the identity of the constantly helmeted Akerians. Meanwhile, the seeds of rebellion are beginning to blossom in the mind of one Akerian warrior, who is increasingly distressed by the enslavement of the Verunans and thinks it might be high time to let the left hand know what the right hand’s been up to all these centuries.

The Murdered Sun is the first of sixteen Star Trek novels—or, more accurately, fifteen novels and a novella—by Christie Golden, most of which take place either fully or partially in the sphere of Voyager. She wears her fandom passionately on her sleeve in a way that recalls some of the Trek authors of the 80s, both the best and the worst. (Her about-the-author page mentions her writing Trek scripts in high school.) Fortunately, it’s the better ones she takes after here. I think Golden succeeded in finding a lot more humanity in these characters than the show managed in its first season and in concocting versions of these characters I really like. One representative example occurs when Harry freaks out seeing floating blood and corpses on an Akerian ship they’ve disabled and are investigating, and Janeway gives him and B’Elanna a moving little speech reminding them that all their actions out in the Delta Quadrant have consequences, even if the move they had to make was the right one at the time.

It’s always fascinating to see which characters authors of early series installments are drawn to, and for Golden, it’s Chakotay and Paris, particularly the former. Chakotay is a character built, as we now know, on a solid foundation of pure cringe. Much of the basis for his character derived from notes provided by a fraudster named Jackie Marks, a.k.a. Jamake Highwater, a writer who was hired to consult on Native American culture for the show and who claimed to be Cherokee but was actually of Eastern European Jewish descent. Any kind of deep dive on Chakotay’s character is going to entail a certain amount of risk with regard to stereotyping and misrepresentation, and not every step Golden takes with him is perfectly graceful.1Contemplating the Trail of Tears, p. 141: “His dark eyes were somber but not vengeful. He had forgiven, as most of his people had forgiven.” Had they now? Citation needed much? There’s a bit of the spirit animal stuff, but thankfully, she doesn’t go full akoocheemoya. On balance, I think she manages about as well with the character as any white person in 1996 could be expected to. What’s really interesting is seeing him show some actual passion and enthusiasm. Reading this book was the first time so far that any installment of Voyager, TV episode or novel, successfully convinced me Chakotay actually has emotions.

Paris also has an extremely interesting arc in this book. He’s as wigged out by the Verunans as Chakotay is enraptured by them, and is unable to deny the fact that he is repulsed by how they look. He doesn’t have anything against them as people, and he assures Janeway it won’t get in the way of his duty (and it doesn’t), but he can’t help feeling how he feels about their appearance. This is the kind of thing Star Trek likes to act like it is completely past, and it’s refreshing to see some of the wind get taken out of it. I know some are turned off by the cockiness of the character, but having him begin his own penance before anyone else even starts laying into him about it goes a long way in effectively deflecting that, and it still manages not to preclude teachable moments.

Writing for a new series is always a potent test of a new author’s abilities. It’s one that Golden passes quite comfortably, and knowing most of her other work in the franchise takes place in and around the same series has me looking forward to seeing what she turns out. It’s often pleasantly difficult to see where certain developments are headed, although the twist she saves for last is actually the easiest to guess. This book was always doing something fun and/or interesting, and I found myself a lot more sucked in by it than I expected.

Excellent. This is a great debut novel, especially in a series as shaky out of the gate as Voyager. Big fun character arcs for Chakotay and Paris provide most of the meat of the book, but a steady stream of intriguing developments, ideas, and tweaks nicely maintains the flow. Even though it’s early enough to have probably been based mostly (if not entirely) on the series bible, Golden’s interpretations of the characters are ones I’m very much all about. I’m definitely looking forward to reading more of Christie Golden’s Trek stories.

NEXT TIME: When saucer sep goes wrong in Rogue Saucer