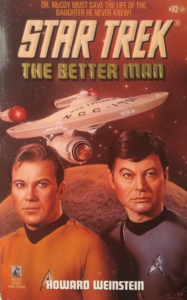 This week, a treaty renegotiation brings aboard an ambassador who dredges up memories of a somewhat lopsided rivalry for Dr. McCoy. But when Bones learns he’s a father again, he’ll have a dickens of a time remembering the right name to write on the birthday cards. Would McCoy make a good politician? Is this secretly a YA novel? And how long can we all keep pretending to care about Howard Weinstein’s résumé? All this and more in The Better Man, the book that hopes its fake ID is believable.

Once upon a time, Dr. McCoy was attached to Mark Rousseau, the ambassador the Enterprise is picking up at Starbase 86, at the hip. Today, however, he couldn’t be less happy about the impending rendezvous. When Bones isn’t forthcoming with the details, Kirk accesses the records: Rousseau and McCoy both served aboard the science vessel USS Richard Feynman, the former as captain, the latter his CMO. But seven months after arriving, McCoy transferred to the USS Koop and took a demotion to junior medical officer. McCoy promises his feelings won’t interfere with his duty, but makes virtually no effort to hide them.

The ship’s assignment takes it to Nova Empyrea, a colony of genetically enhanced humans the Feynman stumbled on about 150 years after the colony’s founding. Although they don’t care much about or for the Federation and mostly want to be left to perfect genetic engineering in peace, they agreed to let the Federation set up an astronomy outpost at the time. Eighteen years later, they want it gone, and Rousseau and McCoy are saddled with the uphill battle of persuading them to vote to keep it around. The colony’s council president, Elizabeth March, specifically requests that they be the only diplomatic liaisons assigned to the case; meanwhile, Spock and Scotty are tapped to begin disassembling the outpost in anticipation of what many Empyreans consider a foregone conclusion.

But multiple developments threaten to disrupt Empyrea’s equilibrium. March drops the bomb on McCoy that he’s the father of her daughter Anna, a revelation that spells trouble for all involved—not only because procreation with Outsiders1The capital O is Weinstein’s, not mine. is forbidden on Empyrea, but because Anna has her eighteenth birthday coming up, meaning she’s up for a genetic exam. Normally, upon passing, her reproductive inhibitors would be turned off, but Anna’s results will reveal the truth, resulting in her sterilization and Elizabeth’s ousting from her presidential post—and those are both best-case outcomes. At the same moment, revolution is fomenting in the hearts and minds of the colony’s younger generation, especially in a boy named Ethan, who’s sweet on Anna but shy. But not so shy that he won’t take matters into his own hands once he finds out the truth…

Much of The Better Man is devoted to flashbacks that fill in the details of the McCoy/Rousseau friendship and fallout. Perhaps not surprisingly, given certain parts of their writer’s C.V., these have a distinctly televisual feel; you can practically see the dissolve transitioning into them. But even though they add heaps of context to their relationship, I simply didn’t enjoy them that much. The two men’s rivalry is, by design and McCoy’s own admission, pretty much all in his own mind, and winds up more or less a nothingburger.

It’s not the novel’s only undercooked component, unfortunately. A subplot in which Spock and Scotty discover sabotage at the outpost fizzles out, the only sure fact in the end being that “an Empyrean did it”2I have a theory about this, though. See “MVP & LVP”. There’s also some muddy messaging happening here; the text seems to suggest that the only meaningful way to enact change in a society is through the means provided by the establishment, but offers only violence as a counteroption. I feel like perhaps with an extra modicum of critical thought, a more imaginative and nuanced take might have emerged. Characters expend a lot of emotional energy in this book, too often in service toward a dead end.

Maybe if it had been tweaked a little, The Better Man could have been the rare TOS story that holds general appeal for teenagers. Anna’s angst is actually fairly compelling and well-rendered, and all she really wants is the agency to make her own choices and enough respect to be allowed to face the consequences of her decisions. But the adult drama tilts it in the other direction, although not far enough. So you have it occupying this kind of unsatisfying middle ground where it’s a bit too low-key and light on regular Trek action for adults, but also dealing with adult matters that a touch heavy for kids. What you have as a result is a book for almost no one.

I say “almost” because really the only folks who are going to enjoy this are the ones that are here for solid character interaction. I especially liked the Spock/Scotty parts; that’s a character pairing that shouldn’t be as rare as it is. But as fun as those time-tested relationships always are, they’re far from enough to salvage a whole book all on their own. If I had to pick one word to sum up this story, it would most likely be scatterbrained. It doesn’t pay enough attention to most of its elements and leaves various knots frayed and untied. It’s at least pleasant, but that can only get you so far.

If you’re here entirely or mostly for faithful character portrayals, you might have some fun with this book, and more power to you. But anyone looking for more or for anything else should bow out early. So much of this book is either sloppy, poorly thought out, or both. An undercooked rivalry plot for McCoy, an unsatisfyingly settled mystery element, and questionable messaging all add up to make this one a dud.

NEXT TIME: A film that spans multiple Generations