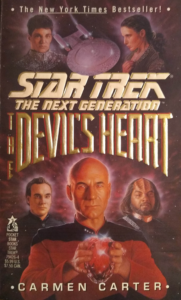 This week, the discovery of a mythical artifact rocks the galaxy, but the seemingly innocuous stone has a history more akin to that of a blood diamond. When the Enterprise takes the gem aboard, Picard insists he can quit any time he wants, but the crew begins to get worried when he starts to lose weight, turn pale, and cal the artifact “my precious”. Why does Worf always have to be so Worf? Who’s riding dinosaurs on the holodeck? Will the sonic appliance wars ever end? All this and more in The Devil’s Heart, the book that’s disturbingly warm to the touch.

The Devil’s Heart
Author: Carmen Carter
Pages: 309
Published: April 1993 (hardcover)
Timeline: One month after “I, Borg” (S5E23)
Prerequisites: One character’s actions are motivated by the events of “Unification” (S5E7+8); otherwise, none

A team of Vulcans led by a woman named T’Sara appears to have just made the archaeological breakthrough of the century: they’ve found an artifact which in Vulcan is called the Ko N’ya. Although Mario would insist it’s just a stone, almost all spacefaring cultures recount some version of it in their mythology, and all of them describe an alarming body count left in its wake. That certainly tracks with its discovery at the Vulcan camp: when the Enterprise arrives, all the Vulcans are dead except for T’Sara, who has withdrawn into a Vulcan healing trance. T’Sara warns that “the blood never stops flowing” where the Ko N’ya is concerned, but that’s just crazy old-lady ranting—

Given his reputation as an up-and-coming amateur archaeologist, it comes as no surprise that the discovery of the Ko N’ya intensely piques Picard’s interest. But his behavior with it hanging around the Enterprise becomes more and more erratic, and his decisions become increasingly Heart-centric. He’s rarely seen not cradling it like a baby; he gets antsy about letting Data run tests on it; and he welches on his customary breakfast with Beverly multiple times in a row to let it whisper sweet nothings in his ear. If they don’t figure out what to do with it, Picard’s obsession is on track to bring him down and take the whole ship with him.

The Devil’s Heart is peppered with accounts of previous possessors of the Ko N’ya, which are in fact dreams being had by Picard. To the Klingons, it was known as the Pagrashtak; the Andorians called it Telev’s Bane; even Surak had a brush with it (though unsurprisingly, he had the wisdom even as a child not to have any part of its shenanigans). Without these interludes, The Devil’s Heart could neither reach nor justify event novel length. Nonetheless, they’re reasonably compelling. Most of the non-Enterprise parties pursuing the Heart, however, don’t get developed enough to feel essential. I think the book might have done better to focus more on the people who wanted the Heart than on Picard’s dreams about it, even though I liked those dream passages.

That’s not the only messy part of the book by a long shot. As mentioned just above, many characters who aren’t on the Enterprise are underdeveloped, and a lot of them disappear for long stretches, most notably Camenae, the El-Aurian who, in contrast to Guinan, has grown cynical and decided to monetize her Listening powers. No one else in pursuit of the stone has a major impact on the story, though I did like the callback baked into the Romulans’ undoing. Also, the Ko N’ya’s nature is pretty nebulous—the book can never seem to decide whether it’s a mind-control device embedded in a rock or if it’s vaguely sentient somehow. I also wish it had leaned more into the Heart acting at Picard’s emotional behest—it only starts to do some truly crazy stuff near the end of the story.

There are reasons that are vaguely alluded to in Voyages of Imagination that explain the ramshackle nature of the novel. Carter initially declined to write an event novel because she didn’t have any ideas that could fill out that kind of space, and although she says this one came to her fully formed on a beam of divine light, this one in truth really can’t either. A lot of personal things going on in her life during the writing caused her to miss deadlines and burn out on writing fiction permanently in a professional context (this was her final novel, Trek or otherwise). It does seem like it could have used several more drafts. Star Trek novels are in general rarely what I’d call tightly plotted, but this one misses even that relatively low bar.

Despite what a hot mess The Devil’s Heart is, however, it’s still fairly entertaining. Starbase 193 and Smelter’s Hold both have a Mos Eisley-esque flavor that we’d see more of in the season 7 episode “Gambit”. There’s lots of well-spoken dialogue in this one as well. I’m not usually that big a fan of Dr. Crusher—probably my least favorite Trek doctor, including Pulaski—but I feel like she really crackled with personality in this book in a way that she rarely does on the screen. This book could certainly have been a lot better, but all things considered, it also could have been a lot worse.

I give The Devil’s Heart 3 out of 5 sonic dishwashers. Despite being really messy, this one is still reasonably entertaining. A lot of its plot threads get away from it for too long at a stretch and there’s a lot that’s not important or well-developed enough to have made the final cut, but the core premise is strong and carries the book over a lot of rough patches. If you’re looking for a rich Guardian of Forever yarn, you’re better off sticking with Imzadi, but there’s enough here to have a decently good time with.

NEXT TIME: The Enterprise-D crew has their eyes on The Romulan Prize