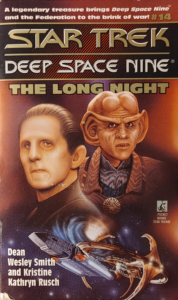 This week, the Supreme Ruler of Jibet flees an uprising, but misses a few million snoozes on his alarm. Eight hundred years later, his missing Uhaul has been found, and now the entire Alpha Quadrant is stopping by to rubberneck—and get in on the storage wars. What qualities get an ensign picked for Defiant duty? What does the officers’ handbook say about swearing? And can Smith and Rusch make alien fetch happen? All this and more in The Long Night, the book that—BAH GAWD! THAT’S JAKE SISKO’S MUSIC!

We start with a prologue that, unlike many prologues in Star Trek novels, is an actual legitimate prologue and not simply a misnamed Chapter One.1Appreciate this compliment. There won’t be many. The jig is up for Jibim Kiba Siber, the Supreme Ruler of the planet Jibet. A revolution is knocking at the castle gates, and he’s taking a thousand of his most loyal followers and a hoard of Jibetian treasures in a ship called the Nibix and striking out for greener pastures. Jibim and his people tuck in for seventy years of cryostasis, by which time hopefully they’ve reached a world without the pesky nuisance of a disgruntled citizenry.

…a patron at Quark’s tries to sell him a statuette that Dax immediately recognizes as being from the Nibix. Both she and Sisko are aware that this means the Nibix, by now long since passed into the annals of legend, has been found. Jibet has since grown into a loose empire comprising eighty worlds, and they have an agreement with the Federation that if the Nibix is ever found, the Federation will keep it under their protection until such time as it can be returned to the Jibetians.

Sisko and Dax light out for the Nibix as quickly as they can, with Bashir and O’Brien in tow for medical and engineering emergencies. But the rest of the galaxy is already starting to get wind of the marvelous find, and the simultaneous convergence of so many visitors upon DS9 raises tensions considerably. Starfleet sends three Galaxy-class ships to keep the peace, while the Cardassians, of course, have to have their fingers in any pie baked at Terok Nor. The Grand Nagus smells profit and shows up. Various freelancers and mercenaries find themselves a parking spot. And the Jibetian councillor en route has an ulterior motive for skipping the whole Federation protection bit and getting the Nibix back right now—which could be seriously complicated by the discovery that the Supreme Ruler is still alive after all these years…

Boy, this Nibix sure seems like a big deal! There is definitely a good reason why everyone in the Alpha Quadrant is losing their mind over its reappearance. Why else would Ben and Jadzia speak of its every detail with hushed reverence? This thing must make the Ark of the Covenant look like a shoebox full of Pokémon cards. I mean, why would Sisko literally give security the order to shoot to kill if the Nibix wasn’t the most important archaeological discovery of no less than the last billion years? You know those Star Trek characters—never can stop flapping their gums about that dang Nibix. And now here it finally is. Crazy, amirite??

I hope I ladled enough sarcasm onto that paragraph to drive home one of the major things wrong with this book, which is to say, it’s a pretty tall order to ask a reader to feel the same level of excitement as Sisko and Dax for some rando ghost ship that we have never heard a single peep about before now. TV Tropes calls this kind of thing an informed attribute, essentially saying there’s a lot more telling than showing going on. Julian and Miles seem befuddled by the hype, preferring to stay in their respective lanes and keep their noses to the grindstone, and I can’t say I blame them. At no point did I pick up what this book was laying down, about the Nibix or anything else.

Worse, the book can’t keep what it does lay down straight. The Long Night is bookended by contradictory accounts of the Supreme Ruler. At the beginning, we get a picture of a monarch who has clearly failed on all counts. His mother is quick to remind him what a pale imitation of his father he is, and he’s unpopular enough to have to flee the planet, though he still has a few loyal subjects. But when he is miraculously revived later, he is gregarious, affable, and whip-smart, and it’s mentioned several times that even though he’s been out of the game for 800 years, he’s got as modern a mind as anyone. And I’m just sitting there like, “Wait a minute, I thought this guy sucked?”

It’s too implausible for me to accept that the Supreme Ruler surviving eight centuries of cryostasis thanks to a nigh-endless number of failsafes in his royal cryo-chamber and the tireless efforts of Dr. Bashir is an exciting bonus for all involved and not the immediate dawning of a day of reckoning. You’d think this guy would be pretty scared to be taken to account for crapping the bed hard enough to move the populace to revolution and then running away from it. But the book completely forgets about that and recasts him three-fourths of the way in as a nice guy with a sharp mind who gets the last laugh by nailing the councilman heading up the Jibetian fleet for trying (and failing) to keep everyone from learning that his ancestor, the Supreme Ruler’s royal assistant, betrayed the Supreme Ruler by sabotaging the cryo-chambers to ensure his family ascended to the throne and stayed there.

Mother of mercy, this was a sloppy one.

Bad. The Long Night can’t keep its story straight about the principal character of its central setpiece, and it relies way more on telling than on showing to hype the reader up for that setpiece, which works about as well as you might expect. As a result, this is a hard one to want to get through. Combine that with a real snoozer of a “Jake and the Ferengi” B-plot, and this is an easy call for the “nope” pile.