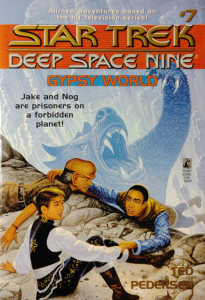 This week, when Nog peeks at a starmap containing a secret, the ship’s captain brushes it off as the folly of youth. But his crew demands tougher justice, taking the boys on a ride that may not come with a return ticket. Why does the computer have a feminine voice? Where the heck is the Lost Quadrant? And is being the leader of the Rom Defense Squad going to become a full-time gig for me? All this and more in Gypsy World, or, D.S.9.: The Search for Eden.

If you’re anything like me, you probably cocked a single eyebrow à la Spock at the title/cover/existence of this book and have an overwhelming need for it to be addressed at least a little bit up front. The Romani (not “Gypsies”, a nomenclature I will not use in this review) are among the most heavily stereotyped and denigrated peoples in history. There is a long and shameful history of mistrust toward them and violence against them; it’s estimated that as much as 90 percent of the Romani population was killed in the Holocaust. Even gypsy itself is an inaccurate word borne of baseless assumption, deriving from the fact that the first Europeans to meet them initially took them for Egyptian based on their dark skin. (They originally emigrated from India.) You’d be right to guess that author Ted Pedersen doesn’t make any significant moves to alter these perceptions or paint a more sympathetic portrait of the Romani and/or similar nomadic cultures, but Gypsy World has so many problems that this is, somewhat surprisingly, among the least of them.

Here, the Roma stand-ins are called the Fjori, after their ancient ancestor Guy Fjori of the planet Flavortown. Their captain, Jrl Vardk, requests that the bay where his ship is docked be declared off limits while the Fjori are in town. Jake, studying the Fjori, finds the computer doesn’t know a whole lot about them—in fact, it’s not even certain their homeworld exists. Nog doesn’t know either, but does know how they can find out. He lifts a few valuable crystals off a Fjori named Kala while Kala is in the middle of a con of his own, giving him and Jake the excuse they need to sneak through the ducts and return something Kala “lost”.

Jake is found by a Fjori girl named Vija, while Nog gets busted trying to download their secret starmaps. Captain Vardk believes Nog when he says he didn’t see anything incriminating and lets the boys off easy. But his subordinates feel he should have meted out a harsher punishment—or, really, a punishment at all—and go behind his back to abduct Jake and Nog and forcibly extradite them to the Fjori homeworld, imaginatively named Eden. This creates a pretty airtight trap, since by Fjori law outsiders who see Eden, and are thus in a position to tell others where it is, are never allowed to leave. So it’s their house, their rules, and nobody knows where the house is. Great!

Vija appeals on Jake and Nog’s behalf to allow them to take the equally imaginatively named Rite of Passage, and even though it’s unorthodox for gajo (a Fjori term for unworthy scum, which is to say, non-Fjori) to take it, it’s not illegal, so the game is afoot. In a best-case scenario, succeeding might allow them to leave the planet, and if not, it at least gets the stink of the word gajo off of them and a place in the family. Not only is the Rite of Passage not easy, however, it’s also ludicrously unfair to outsiders. And that’s just in terms of familiarity with Eden; the boys also have a rival in Kala, who’s motivated by hatred (blaming them for the failure of his crystal con) and jealousy (that Vija has the hots for Jake and not him) and would love to see them lose—or worse…

Though Pedersen does make a very minor early C.Y.A. effort to establish that the Fjori are only very similar to the Romani of Earth and not directly descended from them, they are nonetheless for all intents and purposes functionally identical to the Romani. So it doesn’t read any differently or better when Pedersen makes the unfortunate decision to perpetuate some harmful perceptions about them. Gypsy World continues to advance the misbegotten ideas that they are not trustworthy and that they are con artists and inveterate kidnappers. Presumably, Captain Vardk’s eminent fairness and Vija’s impassioned sense of justice are supposed to provide some kind of ballast, but it simply doesn’t click. About the best you can say about it is that none of it reads as overtly scornful or malicious, but benign or unintended racism is still racism.

And really, there’s not any compelling reason for the Fjori to take after the Romani. Surely there are better and less problematic ways to create a simple visual shorthand for mysterious exoticism. Eden isn’t even a very vibrant or unique world. In fact, it’s kind of a dump, with deserts, canyons, and swamps the only biomes in evidence. Nor are Jake and Nog’s adventures through it especially wondrous or exciting. They have a bland sort of video-gamey progression, in that pejorative sense that film critics sometimes employ, with nothing noteworthy distinguishing this adventure from any other. It all makes the Roma trappings seem even more unnecessary.

There was one part of the book I thought had a chance to be reasonably interesting, and that’s that Pedersen gives a little more lip service to parental fears than I feel like past YA Trek (and especially DS9) stories have. But the idea never resolves. Sisko wrings his hands plenty, but ultimately does nothing. His final appearance of the appearance of the book shows him waking up from a nightmare in a cold sweat, miserable that there’s nothing he can do. It would have been nice to see this properly developed, since the DS9 arm of the YA Trekverse is starting to whiff more than it connects. But given the concept’s unfinished state, I sort of wish it had just been 86’d entirely. And with this one in particular having such a questionable nature on top of that, any time it wanted to start digging up would have been great.

Terrible. Not only does Gypsy World use a mishmash of hoary racist stereotypes to form and inform its featured alien race, it’s boring, undistinguished, and badly undercooks some potentially fascinating ideas. Ted Pedersen was also half-responsible for another equally execrable DS9 kids’ romp, The Pet; perhaps now we’ve got a better idea of whose contributions tanked that one.

NEXT TIME: Janeway takes on a lizard blizzard in The Murdered Sun