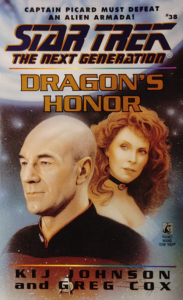 This week, Picard must convince the Dragon Empire to join the Federation to keep them from becoming Chinese food. But if he doesn’t want to abide by the worst possible interpretation of the Prime Directive, he’ll have to make sure the impending nuptials go smooth as butter. Can Riker make poker sound honorable? Will Data have Kivas Fajo flashbacks? And exactly how many nasty dishes will Picard have to choke down with a smile? All this and more in Dragon’s Honor, the book that takes its inspiration from an unexpected source.

Dragon’s Honor
Authors: Greg Cox, Kij Johnson
Pages: 277
Published: January 1996
Timeline: Adjusted to shortly before “Eye of the Beholder” (S7E18)
Prerequisites: None, though a lot of callbacks will be meaningless if you haven’t seen a good chunk of the series

This week’s mission takes the Enterprise to Pai, home of the Dragon Empire, a society of people that left Earth shortly after the Eugenics Wars and decided to base their society off of medieval China. Picard & Co. are on hand to make sure the wedding of the Dragon Emperor’s son, the Dragon-Heir, and the Green Pearl of Lu Tung, the daughter of an important noble from a rival faction, goes off without a hitch. Successfully executed, the wedding will both put a stop to the civil war that has torn Pai asunder for so long and prove to the Federation that they’re united enough as a people to join it. The Dragon, however, does not seem particularly interested in Federation membership, fearing it will dilute the might of his Empire. He’s also not terribly concerned about the impending arrival of the G’kkau, a race of reptilian space pirates with a reputation for gruesomely devouring the peoples they invade, and on whose list Pai is the next target.

The G’kkau are more of a ticking clock than an actual villain. They’re dispatched as quickly as they’re introduced, with very few appearances in-between. The real meat of the story is in the senior officers hunkering down with various nobles and trying to build a bridge between the Dragon Empire people’s way of thinking and the Federation’s. Picard of course does most of his hanging out with the Dragon, and is frustrated by the ruler’s unwillingness to take things seriously and lack of interest in Federation membership. Picard is far more upset by an assassination attempt than the Dragon is, and he’s itching to get that treaty hammered out, because without it he “has to” do that morally reprehensible thing where he has “no choice” but to stand idly by and watch all the Pai get eaten by lizard pirates simply because they refused to join their galactic club. But all the Dragon wants to do is bone Deanna and have Picard taste Pai delicacies of increasingly revolting taste and texture, which Picard chokes down like a champ for the sake of diplomacy.

Meanwhile, Data is originally part of the landing party, but Picard quickly sends him back to the ship after he realizes the Dragon wants to keep him as a “gift” from the Federation, and he remains at the conn for the duration. Geordi volunteers to put together the fireworks show for the wedding, displaying a canny sense for which missions you want to be on the ground for and which ones you don’t. Riker gets invited to the Dragon-Heir’s bachelor party and teaches them poker, then twists himself into a pretzel trying to explain how it’s actually a game of great honor and not a filthy lying game for lying liars. Speaking of honor, with a culture so invested in that concept, you know Worf’s gonna have an opinion about it, and he and the Dragon’s Minister of Internal Security gain a mutual respect for one another after an exciting duel. Beverly becomes the surrogate mother of the bride when the Green Pearl gloms onto her, and Deanna has the thankless task of playing to the Dragon’s shameless drooling over her, although to her credit she immediately adopts a very “all part of the job” approach and is extraordinarily good at steering him into a change of subject when Picard requires it.

I have to admit I was pretty worried about Dragon’s Honor right out the gate. The word “honor” in the title along with the similarity of a visit to a tribal people evoked traumatic memories of a certain universally reviled season-one episode. Additionally, there is the unavoidable thorniness of white people depicting an Asian culture to contend with. Though I’m not the right person to be making this call, given that I’m also white, I will say, for all the nothing it’s worth, that the Dragon Empire as portrayed seemed more quaint than anything, and nothing about it stood out to me as overtly offensive, certainly nothing that would put it on the same level as the episode I’m sure I don’t have to name here. Though it get off to a slow and apprehensive start, it eventually won me over with excellent character work, scoring sensible chuckles and bemused “Huh!”s with pleasing regularity.

There is also a bit of a meta whodunit element, with a mole on Pai reporting back to the G’kkau about their assassination attempts, and although text allows the writer to cheat somewhat by keeping that person’s identity hidden in a way that TV couldn’t, it’s still easy to figure out early on who that person is if you’re paying attention to some key phrases. As we well know by now, however, it generally isn’t advisable to come to Star Trek looking for well-written detective stories, and the ease of figuring out the traitor’s identity doesn’t damage the book in any significant way. Nevertheless, it is an element of the story I felt moved to comment on.

Despite the double billing on the cover, Dragon’s Honor isn’t the result of a true collaboration. The premise itself was concocted by Johnson, and she wrote the first draft, but when she had to relocate for a new job, Cox, a former colleague of hers at Tor, stepped in to flesh it out. Johnson says her “initial goal” was to write a How Much for Just the Planet? for TNG, which is not a vibe I got from it while reading, but which does make a lot of sense now that I know it. While few can match the wild, loopy creativity of an author like John M. Ford, Dragon’s Honor is more cohesive than its inspiration, though it does maintain roughly the same energy, and it only dips a toe in something approaching farce in the final, rather rushed pages. I think pretty much anyone would say Planet is the more daring and memorable of the two, but I always felt out of my depth with it in a way that was both uncomfortable and unpleasant, and I appreciate Dragon’s Honor for never making me feel like that. (Maybe the lack of spontaneous musical numbers helped.)

Johnson, incidentally, is a pretty eclectic lady, one I think is worth taking a moment to talk about since this is the only time we’ll ever see her name on a Trek cover. Most of her career has been spent writing fantasy, and she won a Nebula three years in a row, for short stories in 2010 and 2011 and a novella in 2012. The novella, “The Man Who Bridged the Mist”, also won the Hugo that year. Her résumé has enough to make almost any self-professed nerd squeak out a squeal of delight: she’s been a managing editor for Tor, a collections and graphic novels editor for Dark Horse Comics, a continuity director and creative director at Wizards of the Coast, and a “subject matter expert” for Microsoft. She speaks proudly of getting to write a Star Trek novel as a “making it” moment, and she’s got a mind so full-to-bursting with ideas—not to mention the right connections—that I wish she’d gotten to take on at least a few more with her undivided attention.

For most of its length, I found Dragon’s Honor pretty average, and for a while I felt pretty dead set on giving it that rating, but it’s just too winsome and has too much charm for me to make it stay in the middle ground. It has a considerable amount of baggage to overcome from the jump, and I’m actually surprised that it managed to do it, at least by whatever standards I’ve cultivated after almost two hundred reviews. It’s a good lesson that any material is salvageable in the right hands, and if you know anything of Greg Cox’s reputation, you know that his hands are going to be the right ones far more often than they’re liable to be the wrong ones.

Good. I was going to call it average, but an accumulated mass of solid ideas, intriguing scenes, and fun quirks nudged it upward. Dragon’s Honor learns well from its inspiration and tempers it into something that, while far less all-out wacky, is definitely more cohesive. The trade-off was a good decision. Although it’s a little slow to start, it eventually becomes a fun ride with lots of fireworks, literal and otherwise.

NEXT TIME: The crew of DS9 tucks in for The Long Night