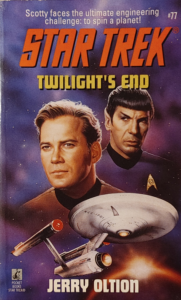 This week, the planet Rimillia needs Scotty’s help to escape the No-Spin Zone. But when Bones speaks for the trees, he and Sulu find themselves committing to a marathon Spore stream. Which will prevail: plants or machines? And will one of them emerge the victor before rotation can turn into revolution? And also, should Chekov be here yet? All this and more in Twilight’s End, the book that won’t get all judgey about your hobbies.

Twilight’s End
Author: Jerry Oltion
Pages: 272
Published: January 1996
Timeline: Voyages of Imagination places it vaguely after “A Taste of Armageddon” (S1E23), though Chekov is present, so it would have to be at least partway into season 2
Prerequisites: None

Much to Dr. McCoy’s ire, the Enterprise puts off another supply rendezvous to hasten their arrival at Rimillia, where war threatens to break out over opposing views on a terraforming project of unprecedented scale as well as the abduction of said project’s lead scientist. The overwhelming majority of planets the Enterprise visits are Class M,1A notable exception occurs in one of the earliest Pocket Books Trek novels, The Klingon Gambit, which begins with an anticipated investigation of a Class Q world. Sadly, it’s one of those frustrating books where the mission they actually go on is way less interesting than the one they were diverted from would have been. but Rimillia sits a step down at Class L, barely habitable even with technological aid (e.g., environmental suits). Rimillia inhabits a binary star system, and is tidally locked—that is to say, it doesn’t rotate on its axis, unlike roughly 99.99999 percent of planets.

As one might expect of a planet that doesn’t rotate, the side that faces the primary star is blazing hot, and the other side is deathly cold. But the other star provides juuuust enough warmth to the cold side to vaporize some gases and create a thin atmosphere. Rimillia’s population lives mostly on the planet’s terminator, the only zone not excessively hammered by either climate. Some of them want to make the whole planet livable, not just a narrow band around it, and to that end they propose using thirty thousand impulse engines to get it turning and have things other planets have, like normal weather and seasons and day/night cycles. Scotty is tapped to take over the project on account of the aforementioned kidnapping plus the destruction of vital equipment by an unknown saboteur.

McCoy thinks the engine project is—not to put too fine a point on it—a load of horse hockey, and suggests that genetically modifying some of the local flora might prove more viable in the long term. Sulu running his mouth about his botany experience lands him a spot on Team Bones, and with that, the game is afoot to see which strategy the Rimillians will ultimately choose. The majority of their government officials want to move forward with the engine plan, and so it’s treated as the default option, but even with Scotty at the wheel, prospects look anything but rosy. And that’s to say nothing of the class struggle simmering beneath it all, with the “outsiders” living on the harsh fringes of the habitable zone ready to descend on the comparatively cozy “insiders” at the first whiff of the rotation plan’s failure.

We just got a serving of Scotty a couple weeks ago, though that was a TNG event. It feels strangely rare, on the other hand, to see him featured in a TOS story. Scotty inhabits a lonely gap between what I perceive as the two power trios of TOS: Kirk/Spock/McCoy and Sulu/Uhura/Chekov. The exploits of the former hardly need to be rehashed here, and as junior officers, it’s natural that the latter three would gravitate toward each other for friendship and commiseration. That leaves Scotty the odd man out. Without the ability to slot easily into a trio or even a duo, it’s harder to find narratives that are suited to putting him front and center. So it’s a bit of a shame, then, that this one is so goofy—and that’s probably one of the more charitable adjectives I could use.

Jerry Oltion is an amateur astronomer as well as an author, so I have to imagine the concepts found here are grounded in at least some kind of firsthand knowledge base. Nevertheless, I can’t seem to shake the gut feeling that the plot of Twilight’s End is powerfully dumb, a thing of such exquisite stupidity that it is actually kind of perversely beautiful. I realize this is the sort of breathless take that ironic lovers of badness reserve for episodes like “Spock’s Brain”, and I don’t deploy it lightly. “Spock’s Brain” probably isn’t the kind of company a Trek writer hopes their creation will keep, but fortunately, Twilight’s End has a few things going for it that keep it from being quite as bad as all that.

Twilight’s End feels like the handiwork of a jack of many trades. Sometimes, you can feel, through an author’s words, the fact that they are much smarter than you bearing down on you with a terrible gravity. Here was more of a variation on that, where instead of feeling like Oltion was smarter than me, I could feel that he has a far greater curiosity about the world than I do. In addition to astronomy, there’s an escape plan that develops from an ensign’s beer-brewing hobby, an exhaustive description of neural nets that was probably far more necessary in 1996 than it is now, and various flashes of an enthusiast’s interest in meteorology and seismology. The personality that peeks through as a result of all this is, dare I say it, kind of adorable.

Twilight’s End also feels, for better and worse and with all it implies and entails, more like an actual episode of TOS than any book in recent memory. How much of a good or bad thing that is will vary from reader to reader. Personally, I think it’s probably better to try to transcend the limitations of the old series rather than create something that fits so neatly within them, but I don’t think that was exactly the intention here, per se—just sort of what happened. It isn’t going to make for anything mindblowing, but it is engaging and fun, as far as it goes, with lots of the good old-fashioned interplay, and it even manages to unearth a fairly novel character combination by putting Bones and Sulu together. I’m not prepared to call this one good, but it does have a certain surprising charm about it that I think can win a lot of readers over.

One thing that definitely adds to the TOS verisimilitude of Twilight’s End is that a redshirt dies in it. We haven’t had one of these in a while, so here’s to Ensign Hughes, who freezes to death when his environmental suit becomes compromised. That’s a pretty rough one, and it takes him a while to die to boot.

Average. After processing the opening and getting a sense of the plot, I was ready to give this one a bit of a drubbing for launching from such a deeply corny premise, but it won me over some with a certain amount of adorkable charm. For those who like their books to feel like they could be ripped straight from the screen, this one definitely nails that feeling, and it also provides a lot of juicy material for Scotty fans. It never fully recovers from the shaky setup, but it isn’t as dreadful as you might expect from such an eyebrow-raising premise.

NEXT TIME: Picard fights to preserve the Dragon’s Honor