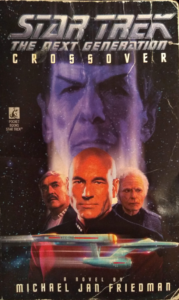 This week, Spock’s first field trip with his class ends in their capture. But help is on the way, from a cantankerous Starfleet admiral hitching a ride on the flagship and a friend who still checks his Google Alerts. Will Admiral McCoy become everything he used to hate? Has the typesetter gone on an unannounced vacation? And can that shuttlecraft settle on a dang name already? All this and more in Crossover, the book born under a blood-green sky.

Fans of The Next Generation will recall that there were three episodes throughout its run that featured actors from the original series reprising their characters: “Encounter at Farpoint”, the series debut, which brought DeForest Kelley in as a severely wizened Admiral McCoy for a cute little baton-passing cameo; the season 5 two-parter “Unification”, in which Picard and Data are sent undercover to find out what the absolute heck Spock is doing hanging out on Romulus; and season 6’s “Relics”, which brought Scotty 75 years forward to the TNG era unscathed by age via the magic of one of his Scotty tricks that basically allowed him to save himself to the cloud until someone found him. Crossover‘s main hook is appealingly simple: it features all three of the aforementioned characters prominently in a single event novel. So while it’s called Crossover—nominally titled as such because Constanthus, a backwater planet way out near the border of the Romulan Empire where the bulk of the action takes place, is the Romulan word for “crossover”—it’s more like a crossover of crossovers. The mind reels.

Spock has decided the unification movement is ready go out on tour, and their first stop is Constanthus, a world on the outer fringe of the Romulan Empire. However, they’re almost immediately betrayed upon setting foot on the planet and captured by Romulan soldiers. As the person still living who knows the most about Spock, Admiral McCoy is tapped by Starfleet to lead a diplomatic mission to rescue him, working in tandem with Picard and the Enterprise-D. Meanwhile, Scotty, who still keeps up with any news items that mention his old colleagues, intercepts the Priority One chat between Picard and HQ and commandeers the mothballed Yorktown during a public tour for civilians in order to mount his own, significantly less official rescue mission. (Don’t worry—he gets them all off of there first.)

Scotty gets caught first by the Intrepid, but wheedles the captain, who happens to be the son of Kevin Riley, into letting him traipse into the Neutral Zone, proving that good connections never expire. When he gets caught again by the Romulans, he pretends to be nuttier than a squirrel turd to provide a cover while he gets a message out about his predicament to the Enterprise. Picard allows a covert one-shuttle operation led by Riker, Geordi, and Data to bail Scotty out, but he isn’t moving fast enough or decisively enough for McCoy’s tastes, and the old man quickly relieves him of command. But the situation quickly slips from McCoy’s grasp when he realizes Tharrus, the governor of Constanthus, knows exactly who he’s got locked up and how important he is, and begins attempting to parlay that leverage into a one-way ticket out of his dead-end job.

In a somewhat unusual decision, Friedman’s interpretation of the unificationist movement has a distinctly Christian patina about it. My brain keeps wanting to use the word “parallels”, but Friedman isn’t dealing in that kind of subtlety here; he’s more into pilfering wholesale from the Bible. Spock’s students call him “Teacher”; his posse eventually winnows down to a core of roughly a dozen disciples, one of whom betrays him, though unlike in the Bible that one gets an actually pretty compelling redemption arc; and in one scene, when a Romulan guard smacks Spock, Spock literally turns his other cheek to the guard. These vibes were always there to some extent with Surak, so it’s not quite out of nowhere, and I’m not prepared to say the comparison is a bad fit, per se. But even though he often allows himself to feel satisfaction about the part he has played in reunifying Vulcans and Romulans, I also feel like Spock wouldn’t be particularly interested in being anyone’s Jesus.

More typically for Friedman novels to date, it’s light on digressions and world-building for its own sake, choosing to charge forward on the strength of an indelible hook. The novel I’m most inclined to compare it to is Requiem, and Crossover handily comes out on top in that contest. Although Crossover is similarly lean, it feels more complete and more thoroughly thought out. Even if you don’t always agree with some characters’ actions—and there were certainly times when I didn’t—their voices are all on point. This comes together in an especially satisfying way at the very end, when we get to hang out with all three of the TOS officers for an all-too-brief moment. More generally, Scotty is a lot of fun here. Turns out he’s pretty entertaining when he gets more to do than mope about the good old days, and it’s good to see the TNG crew’s respect for him coming along nicely, particularly Geordi’s.

For an event novel1I’m fairly certain that nomenclature had fallen into disuse even by this time. I’m not sure I’ll ever be able to shake it, though. It’s just how I’m used to thinking of unnumbered installments designed to generate hype because that’s what the earliest such ones were called.—and a novel that gathers the TNG-era portrayals of three TOS titans under one umbrella can’t really be considered anything less than an event—Crossover doesn’t really feel like a big hype machine. But it does its job and it does it well, and manages to entertain without tripping too hard over its own feet. Unless you’re a really easy mark for TOS cameos, it’s unlikely it’ll knock your socks off, but for two out of three of the TOS characters featured herein, these are versions of characters I’d like to hang out with more often but don’t really get to, and Crossover is valuable if for no other reason than providing exactly that opportunity.

Good. Crossover is another lean ‘n’ mean story from the typically workmanlike Friedman, built, as his stories so often are, around a compelling hook and not much else, but this one is at least very complete and satisfying in that regard. If you like simply hanging out with classic characters, Crossover is a book that will amply provide just that. I can’t help but find it a little unusual to interpret the unificationist movement through a Christian lens, and McCoy is insufferable for the entire first half, but it’s more of a hit than a miss.

NEXT TIME: There’s always someone better in Nova Command