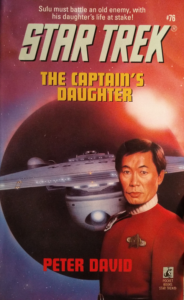 This week, when Demora Sulu turns into a wild animal on an away mission, John Harriman has the unenviable task of putting her down. But her father refuses to accept how it went down, and risks a good old-fashioned court martial to unlock the truth. Can Captain Harriman’s reputation survive another high-profile death? How many kids has Kirk actually fathered? And will my new Boothby theory break the internet? All this and more in The Captain’s Daughter, the book that’s brought to you by Lifeshot.

The Captain’s Daughter
Author: Peter David
Pages: 278
Published: December 1995
Timeline: Present day of the book is not long after Generations, maybe a month or two; segments in the past are set just after the end of the five-year mission and in assorted subsequent years
Prerequisites: Star Trek Generations (movie or book); the development Demora’s “death” hinges on is based on technology from “Shore Leave” (S1E15)

It’s often considered anathema to talk about Star Wars in Trek spaces, but I’m going to give it a shot anyway.

One of the criticisms most frequently levied at The Rise of Skywalker by its detractors is that it crudely walked back one of The Last Jedi‘s most poignant themes—i.e., that it isn’t your name or your lineage that makes you important, and you can make your own destiny. In those critics’ view, The Rise of Skywalker took a huge steaming dump all over that inspiring message with the clumsy revelation that Rey, previously thought to be some nobody hick from the sticks, was in fact the granddaughter of Emperor Palpatine, a surprise that raised more questions than it answered, chief among them: “There was someone out there who would have sex with Palpatine?” (It’s a big galaxy, I guess.)1Allow me to drop a disclaimer here that I’m not nearly as big a fan of Star Wars as I am of Star Trek, that I haven’t seen any of the so-called “sequel trilogy” or anything else made since, and that I have no intention of doing so any time soon. I apologize if this summary was too reductive or if I got some of the basic facts wrong, but it’s in service of a larger point. All that said: if anyone asks, I say I like The Last Jedi, literally the only reason being to spite the kinds of people who hated it.

The Captain’s Daughter suffers from something somewhat similar. In it, the Enterprise-B answers a distress call from Askalon V. Hearing the speaker use an obscure Chinese dialect, multilingual Demora Sulu is intrigued, and asks Captain Harriman to join the landing party. Down on the planet, Demora gets separated from the group only to return naked, feral, and on the warpath; in the ensuing melee, Harriman is forced to kill her in self-defense. It’s a real raw deal, especially for Harriman, who still struggles mightily with the reputation of captaining the ship that felled no less a legend than James T. Kirk on its widely publicized shakedown cruise, and must now face the fact that a relative of another colossal Enterprise legend has now died on his watch. (At his own hand, even.) However, that is the nature of the beast. Space is dangerous, and the people who dedicate their lives to exploring it understand what they’re signing up for.

Occasionally, a captain or senior officer will allow themselves a brief indulgence in mourning a crew member’s senseless passing. In very rare instances, we might get to know them fairly well before death snatches them from us. But Demora Sulu is not just some random redshirt. By dint of her name, Demora Sulu is exempt from the ignoble fate of the average lower-decker, and her death cannot be abided, either by her father who watched his own captain elude it countless times or by the demands of canon. As a result, it never feels like Demora is truly gone, which undercuts a lot of the book’s dramatic heft and potential.

Borrowing some of its structural DNA from David’s own Imzadi, the story then alternates between past and present, showcasing the wild 24 hours Sulu spends in the city of Demora, a terraformed tourist trap in the Sahara. Although Sulu claims to be bored stiff by the city’s manufactured ambience, he nevertheless finds himself drawn into a chase he comes to believe has been arranged by Chekov. Sulu fights off three henchmen in hot pursuit of an alluring, mysterious woman named Ling Sui, all the while never believing the reality of it and camping it up even as he is knocked out cold and captured by the thugs and rescued by the very woman the men were pursuing. Only an anonymous contact getting his head blown off with a disruptor convinces Sulu that the whole fine mess is serious business. The chase spills out of the city into the desert, where they finally elude their pursuers and spend the night at an oasis on the way back to civilization. By the next morning, Ling Sui has disappeared without a trace—every bit the “mystery woman” she told Sulu she was.

Seven years later, Dr. McCoy breaks the news to Sulu that their night of passion in the desert produced a child, and that, having died of Sakuro’s disease, Ling Sui, whose real name was Susan Ling, still carried enough of a torch for Sulu to consider leaving the young girl in his care the best decision. Torn between the prospect of gallivanting about the stars and the urge to do right by the girl and give her a proper rearing, Sulu chooses—at least, initially—his daughter, and subsequent flashbacks showcase the push and pull between the warring desires and their effects on both Hikaru and Demora.

What’s interesting about The Captain’s Daughter is that you can feel it bucking against the inevitability of the status quo, trying to cast it off. The problem is that in order for Star Trek to run the way it does, it must often reject these attempts like incompatible organs. For example, The Captain’s Daughter tries to posit the idea that maybe it is not actually space that is the greatest adventure of all, but perhaps parenthood? A compelling thought exercise, to be sure. But part of what makes Star Trek characters so legendary is their total, unbreakable marriage to the stars. Kirk must reject Carol Marcus. Spock cannot pass Kolinahr. Picard cannot spend his life running a vineyard. Sulu cannot be the father Demora needs. And so the book is essentially pigeonholed into one answer to the above question, which is to say, “LOL, who are we kidding? Of course it’s space.”

Moreover, Demora is maneuvered into fully accepting that running off into space at the drop of a hat was a better decision for Sulu than sticking around to raise her. One could argue, however, that her also being in Starfleet makes that an easier pill to swallow, but while I think there’s room for conflicting feelings to coexist in her heart—she can believe that Starfleet’s ideals are honorable and worthy of upholding and hate that her father regularly chose it over her—I’d have to guess that might have been a little too complex for TOS as it was understood then.

All that said, it’s a testament to Peter David’s talent that The Captain’s Daughter remains a strong read despite being hog-tied pretty much from the jump. I was especially moved by the arc of John Harriman, a character I feel is criminally underexplored given the potential for thematic richness he’s got in him. His father, an admiral, figures heavily into the present-day portions of the story, and where the Hikaru/Demora side of things is mostly about what a parent owes a child, the Harriman father/son dynamic flips that around to powerful effect. Copying the basic structure of a story as excellent as Imzadi also helps give it a bit of shine, and though the buildup in Sulu and Ling Sui’s relationship never gets quite as intense as Will and Deanna’s did, it’s still sweet in its way.

It’s hard to say whether I’d recommend The Captain’s Daughter. On a raw enjoyability level, I would. It’s certainly loaded with excellent individual scenes; some of the best, like Demora experiencing a rollercoaster of emotions while waiting with the rest of Earth to die in the moments leading up to The Voyage Home‘s climax, are like delectable little short stories, the sort of thing you might expect to encounter in one of the Strange New Worlds anthologies. But for those who prefer to unpack their entertainment, some of its core components invite a level of scrutiny they aren’t really prepared to withstand. This is one time where I can’t really proclaim definitively whether to check it out or not. Consider how you feel about Peter David, about this book’s subject matter, and all that implies and entails, and proceed accordingly.

Good, but with quite a few caveats. The Captain’s Daughter defies easy categorization on the TBAGE scale. I’m calling it good because I enjoyed reading it and had fun and was entertained by it. However, be aware that there are a lot of conceptual issues with it, and that several aspects of it wilt under exposure. Some people will be able to forgive that, or simply won’t mind it. I leave it to you to decide which kind of person you are.

NEXT TIME: It doesn’t get more obvious than titling your book Crossover