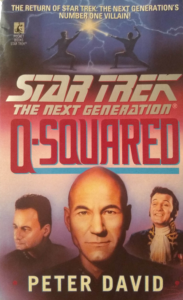 In the final scene of the novelization of All Good Things…, Q, disguised as the jack of hearts in the senior officers’ poker game, decides it probably wouldn’t be politic to pester Picard so soon after taking leave of him. The person drumming up the publishing schedule for Pocket Books, however, clearly had no such reservations. And thus it conspired that barely a month had passed since the end of The Next Generation when Trek fans got another action-packed Q adventure dropped into their laps. But if you’re worried about gorging yourself on too much epic Q-ness too fast, let me assure you that you have nothing to worry about, and that All Good Things… is in fact a delightful amuse-bouche that will perfectly prime you for the mighty feast that is Q-Squared.

Q-Squared begins in Track A, a somewhat different timeline than we’re used to. Here, Jack Crusher is captain of the Enterprise-D, and Jean-Luc Picard is his first officer. They’re en route to Farpoint Station to pick up some medical staff: a new CMO, Beverly Howard (Jack’s ex-wife), and her head nurse, the extremely not-blind Geordi La Forge. Picard makes a generous if not entirely altruistic offer to mitigate any awkwardness between Jack and Beverly by handling the day-to-day business with the doctor. But word comes through that Will Riker, a Starfleet officer thought dead after seven years MIA, has been found alive and near-feral. The Enterprise reroutes from Farpoint to get him, but is waylaid by a familiar space fence—this one erected not by Q, but by another member of the Continuum: Trelane, the Squire of Gothos.

Track B is the one we know and love. The Enterprise is hosting a temporal phenomenon researcher, Andrea Martinez, who raises an excellent question: why and how do weird timey-wimey things happen disproportionately to the Enterprise? The query is posited as they make their way to another such anomaly, the Ompet Oddity. And as surely as the sun rises in the east and sets in the west, the outing there immediately proves eventful: Trelane appears there as well, proclaiming that he created not only the Ompet Oddity but all the other temporal anomalies they’ve come across as well, curious to see how they’d extricate themselves each time. Trelane is accompanied and overseen in this time track by Q, who is mentoring him in the more mind-blowing aspects of Q-dom in a vaguely godparent-ish capacity.

When Trelane gets into it with Guinan, Q takes him outside onto the saucer section and gives him a caustic tongue-lashing, then is troubled when it occurs to him that he doesn’t know why he did it. Deanna recommends letting Trelane hang out with the kids in Mrs. Claire’s class, since Trelane is himself essentially a child. All goes well enough until a couple of security guards are attacked by Winnie-the-Pooh. (It makes sense in context.) Picard proves no more patient than Q, and Q suggests that maybe a little dressing down by an inferior being might not be the worst thing for Trelane, the child vanishes in a huff.

Nursing his bruised ego in his quarters, Trelane is pulled through the mirror by his reflection, a much darker version of himself who plays far more dangerous games. The Trelane of Track A has tapped into the core of chaos at the center of the multiverse called the Heart of the Storm, and from it has gained immense power—at the expense of his sanity. Q barely has time to explain what the multiverse is to the Track A crew before Trelane discorporates him into free-floating atoms and closes the rest of the Continuum off from his all-out assault on reality. Naturally, it’s up to the crew of the Enterprise-D-B to stop the mad lad before he can irreversibly damage reality by smashing timelines together like action figures.

Given that they debuted in such close proximity, it’s natural to suppose that Q-Squared and All Good Things… should be paired up as a double feature. But an even more apt partner would be Diane Duane’s Dark Mirror. Both of them take a concept from the Original Series and extrapolate it to a conclusion that is both logical and absolutely terrifying. Headcanoning Trelane as a member of the Q Continuum is a move so obvious yet so perfect that it’s hard to believe no one made good on it before this. Then again, Peter David has such a firm understanding of the Q mindset that it sometimes feels as though there was some kind of unspoken agreement that only he should write the characters.

Considering how excellent Q-Squared is, maybe that wouldn’t have been such a bad idea. Much like Trelane after he taps into the Heart of the Storm, Peter David is at the absolute height of his powers here. While I’ve made no secret of the fact that I’ve cooled some toward TNG in recent years, reality benders are one type of episode I think it does best out of all the series. And there’s no one more suited to playing with reality in the print realm than David. This book hits every beat the way it intends to, showcasing crack comic timing, terrifying turns of mood, and even expertly accumulated (and released) sexual tension. There was never a moment where I wasn’t thoroughly riveted.

For once, I can’t think of a single thing I could have asked for a book to do better. My notes are completely unhelpful, which generally is a sign that I gave up on them early on and allowed myself to become totally absorbed in simple, joyous, uncritical reading. In one sense, that doesn’t make for much of a review. But, viewed another way, it might be the most informative review of all.

I would be extremely remiss if I did not pour one out for our guest OC Andrea Martinez. It’s hinted in “The Squire of Gothos” that Trelane is certainly capable of unfathomable cruelty, but he actually follows through on it here. There’s a really good idea mentioned a few pages before her death (and also below) that might have come in handy, though with her fate in Trelane’s hands, it ultimately wouldn’t have mattered. Talk about cursed descriptions you can hear, though. Also, Andrea’s death is an all-timer for the “how do you even begin to explain to her loved ones what happened to her?” sweepstakes.

Not only do I strongly recommend Q-Squared, I would go as far as to declare that it is the best Star Trek novel I’ve read yet. I’m a total mark for Q episodes, and Trelane, one of my favorite TOS antagonists, slots into the Continuum nicely and brings both series together in thrilling fashion. If you like Star Trek, TNG, or Q at all, there is no question about it: you absolutely must read this book. It’s by far Peter David’s finest of the ones I’ve covered so far, and a stellar example of what the print arm of Star Trek is capable of.

NEXT TIME: Picard navigates tricky negotiations with some Foreign Foes