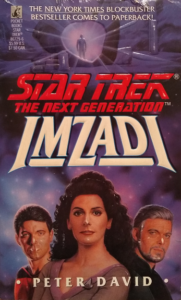 This week, Riker has had a terrible, horrible, no-good, very bad day, and by “day” I mean “four decades”. But then he suddenly remembers he lives in Star Trek and hijacks the Guardian of Forever to take a mulligan. Meanwhile, we take our own trip to the past and watch a young, cocky, clean-shaven Will Riker as he brings the full force of the old Riker charm to bear on an aloof, self-assured Betazoid named Deanna Troi. How do Betazoid restaurants work? Do you think Kirk wrote his own autobiography? And can any of us dream of aspiring to Lwaxana Troi’s level of pettiness? All this and more in Imzadi, the book that begins, naturally, at the end.

For the sake of due diligence, I’m rewatching all of Star Trek as I work my way through the books.1I’m a bit worried about my pace. I’m only at the end of season 2 of Deep Space Nine, and the novelization of “Emissary” is coming up in just five short weeks. Upon finishing The Next Generation, I was surprised and a bit saddened to discover my feelings toward it have cooled considerably. Nearly every character is underserved by both the writing and the episodic nature of television of that era, and pieces of world-building that could have added immeasurably to the richness of the show’s universe consistently fail to receive adequate exploration and development. I still love hanging out with (most of) the characters, but I remain distressed by how much of the series I consider thoroughly disposable.

Luckily, one of the nice things about the novels is that they can pick up that slack, even if they were never meant to stick. Imzadi is one of the premier examples of such a story. As you may recall, Will Riker and Deanna Troi have what’s called an imzadi bond, a deep and vaguely soulmate-ish telepathic connection forged by a powerful love that allows them to know each other more intimately than anyone and occasionally feel the other’s strong emotions, e.g., when one of them is in mortal peril. Naturally, the series does almost nothing meaningful with this over the course of seven entire seasons. But a novel like Imzadi can take that undercooked concept, really dig deep into the nitty-gritty of it, and provide more fertile soil for the idea to grow. Which it does spectacularly.

Our story begins, as some are wont to do, at the end. Riker has made admiral, but he’s hardly on the up-and-up. He and his career are fermenting on a backwater starbase of no account. Deanna Troi died 40 years prior, and with her, Riker’s ability to give two tribble plops about anything. Lwaxana Troi summons Riker to her own deathbed. She still blames him for Deanna’s death, literally dies mad about it, and stipulates in her will that he is to catalog all her memorabilia just so that, in so doing, he will relive all the painful memories. Lwaxana may be a daughter of the Fifth House, holder of the Sacred Chalice of Rixx, and heir to the Holy Rings of Betazed, but I’m sure there’s plenty of room to add “god-tier dispenser of petty posthumous vengeance” to that list.

Meanwhile, back in the roughly early- to mid-season five present, the Enterprise is hosting peace negotiations between a war-hungry race called the Sindareen and several of their planetary neighbors. Deanna is having fun sexy times with an old friend, and Riker is trying to pretend he’s cool with it while internally screaming. But her roll in the hay soon turns deadly, and she telepathically cries out for her imzadi. Riker rushes to her aid, but she dies on the way to sickbay.

Admiral Riker comes to believe this is not how things were supposed to play out, and that the very existence of his timeline is a result of temporal tampering. Convinced that the Sindareen peace conference is a focal point in history, Riker hatches a plan to use the Guardian of Forever to reload an old save and set right what once went wrong. Of course, messing around with the Guardian is 31 flavors of illegal, and his activities attract the attention of Commodore Data, who’s on hand to check up on the team researching the Guardian and keep Starfleet updated on their progress. Data and his right-hand man Lt. Blair go back as well to stop Riker and make sure John Connor dies, thus ensuring the rise of Skyn—wait, wrong story.

In actuality, the above events comprise comparatively little of the text. The longest section, The Beginning—which, as you may have deduced from its title, is in the middle of the book—takes an extended break from the bad future to regale the reader with the tale of a much younger Riker, one who has been newly promoted to first officer of the USS Hood. The Hood has been damaged in a skirmish with Sindareen raiders, so Riker is sent to Betazed to cool his heels for a minute working as a diplomatic liaison. There, he attends his first Betazoid wedding, with … all that entails … and sees, for the first time, in the flesh—all of it—Deanna Troi.

Riker is determined to win Deanna over with his trademark charisma, but she proves a considerable challenge. When he challenges her to parlay her psychology studies into a career among the stars, she shares her belief that the arc of her life is contained entirely within her duties to her family and legacy and that she will stay on Betazed forever. When he accuses her of being too wrapped up in intellectualism, she contends that he’s too driven by his biology. Riker’s romantic travails amuse his superior officer, Mark Roper, who makes a bet that he won’t successfully bed her down.

I admit I greatly feared for the direction the book would take at this point. This is exactly the kind of sitcommy trash that has undermined many an otherwise decent Trek episode, and it’s all too easy to imagine Deanna finding out about the bet just as their relationship is getting to a good place. Thankfully, nothing of the sort ever happens, and Imzadi‘s track to become one of the all-time great Trek romances forges ahead unimpeded.

That isn’t the only pitfall David nimbly avoided. In previous novels, he’s demonstrated a tendency to indulge in embarrassingly puerile displays of prurience. (Wesley Crusher getting a sex slave leaps uncomfortably to mind.) There’s a little bit of that here—you can feel the leering in some parts of the Betazoid wedding, and a passage on page 147 where Riker tries to achieve zen-like focus by accessing his spank bank stands out for the wrong reasons—but for the most part he keeps it focused on the electricity created by Will and Deanna’s opposite personalities, with additional tension provided by Lwaxana’s disapproval of the relationship. With those elements safely on the rails, the book is able to earn the moments when it does finally get hot and heavy.

The structure of the book presents another ripe chance to slip up. Handled less capably, the gimmick of the section titling might have come across as too clever by half. But the narrative is ordered and arranged in a satisfying fashion that makes it easy to see that the gimmick supports the narrative and not the other way around. You’re hooked from the very start (the very end?), and the book flows so smoothly you hardly ever think about the fact that it’s structured non-linearly. It’s just a fantastically put-together book; you stop to admire the craftsmanship as often as you gasp, laugh, and worry the inside of your cheek.

Imzadi is the kind of story I think people are thinking of when they look fondly back on TNG, thinking its excellence is represented by far more of the series than the quarter or so of the total episodes that actually account for that excellent reputation. I’m far more critical of the show as I used to be, but Imzadi reminds me of what I saw when I first fell in love with it. Star Trek has a singular capacity to make you remember the occasional great parts much more readily than the more common not-as-good ones. But I didn’t have to do any labored decision-making with Imzadi. It’s immediately apparent how unequivocally great it is.

I give Imzadi 4.5 out of 5 Holy Rings of Betazed. This is the culmination of the novels being put to one of their best potential uses: taking something that receives occasional lip service and developing it to its best and fullest potential. The structure and the romance are handled very well without succumbing to many of Peter David’s less savory peccadilloes. Imzadi is easily a Diamond of the First Water, but more than that, it’s one of the exceptionally rare Star Trek novels I would recommend even to casual fans of the franchise and people who aren’t already predisposed to enjoying the novels. If you like Star Trek and/or TNG at all and you’ve never read this book, you owe it to yourself to rectify that.

NEXT TIME: The dark side of political asylum in Sanctuary