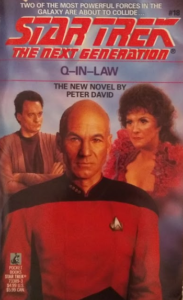 This week, it’s much ado about nothing aboard the Enterprise when our regularly scheduled Star Trek: The Next Generation gets preempted by an episode of My Big Fat Gypsy Wedding. But when Q arrives to observe the phenomenon of human love, he attracts the attention of Lwaxana Troi, and despite the better judgment of literally everyone else, she begins to fall for him. Soon enough, frustration gives way to chaos as a tiff between the young betrothed couple escalates into an all-out blood feud. Will we ever get to see what Guinan can do to Q? Which Star Trek novel has the strongest “dialogue you can hear in your head” factor? Exactly who was clamoring for a “Wesley Crusher gets a sex slave” subplot? All this and more in Q-in-Law, or, The Taming of the Q.

Wedding bells are ringing on the Enterprise as two members of the Tizarin gear up to tie the knot. After surviving a space battle gauntlet straight out of Star Wars, Kerin of house Nistral wins the hand of Sehra, heir to house Graziunas, and because they don’t have a home planet to get married on—being, as one character describes them, “space Gypsies”1Nowadays, the proper nomenclature would be “space Romani”. Peter David, incidentally, has a rather contentious history with the Romani people; at New York Comic-Con in 2016, he derailed a fan’s question about Romani representation in comics to furiously relate what he believed at the time to be an incident of systemic child abuse he personally witnessed in Bucharest in 1993. What he describes is a natural enough thing to be horrified by, except that it appeared not only to have actually more likely been a genetic disorder of some kind, but also to have formed the entire basis for his opinion of the Romani people. Though at first he refused to apologize for his generalized view of the Romani, he soon had a change of heart.—they request the use of the Federation’s finest ship for their festivities.

Picard is less than enthused to learn Lwaxana Troi will be among the delegates in attendance, and even less so to learn she’s currently in phase.2This has virtually nothing to do with the story. Peter David just seems to enjoy tossing in sex stuff for its own sake. But the gagh really hits the fan when Q drops in, purporting to be interested in humanoid love rituals and regaling the Tizarin families with humorous anecdotes. Picard immediately demands that Q scram, but the Tizarin like him and see no reason why he can’t stick around. I and everyone else on the Enterprise can think of exactly four good reasons to tell him to go kick rocks, but the Tizarin will hear nothing of it. Nor will Lwaxana,3This irked me a fair bit. It’s a pet peeve of mine to see people speaking from experience get blown off. I’m willing to let it go since there’s not much of a story without it, though. It’s also well within the purview of Lwaxana’s character to be that way. (The Tizarin have somewhat less of an excuse.) whose growing fascination with Q multiplies the chaos factor exponentially and takes the insanity up to eleven.

No one except Lwaxana and the Tizarin will be surprised to learn that Q is in fact not acting in good faith. Sehra can’t wait until after the wedding to, ahem, receive Kerin’s shuttlecraft in her docking bay, and amid the afterglow, Q clandestinely meets with both separately and plays on each one’s insecurities about the other. The subsequent spat rapidly escalates into an official blood feud, and if Picard can’t stop the two houses from vaporizing each other, he’ll have some slightly more inconvenient things to worry about than having to slog through 30 pages of ceremonial jibber-jabber.

As Star Trek stories go, it’s hard to start with a stronger concept than this. It all follows from one basic question: who are the two most outsized personalities in TNG?4I originally wrote “most obnoxious”, but realized one of the answers would have had to have been Alexander. Q and Lwaxana both have strong, distinctive voices, and David captures them in writing extremely well. Of all the books I’ve read and reviewed to date, Q-in-Law is the one where I most vividly heard the characters’ voice in my head as I read. It’s really easy to get swept up in the dialogue in this one, which works to its advantage, because that helps carry the book when the concept starts running out of gas, which surprisingly is often. Just as my interest would begin to wane, I’d reach a point that piqued it again—kind of like in Rad Racer when you reach a checkpoint after the timer has hit zero.

Elements of Shakespeare flavor the story but never cohere into a major theme. Obviously, you can draw a straight line from Romeo and Juliet to Kerin and Sehra, with the Nistral and Graziunas houses representing the Capulets and Montagues. But this is far from a tragedy—in fact, it regularly surpasses mere comedy and dives headlong into full-on farce. Now, if there’s one thing about Shakespearean comedies, it’s that everyone gets paired off into couples by the end. Aside from Riker offering Deanna a proposal so weaksauce and wrongheaded he’s lucky she didn’t push him out an airlock, however, nothing of the sort really happens—with one notable exception. And not the good kind of notable.

As a thank-you for defusing a tense situation in the holodeck, Sehra dispatches one of her maidens, Karla, to Wesley as a gift. Describing Karla’s desire to serve Wesley as “strong” would be a little like saying a Payday bar is “peanutty”: technically true, but only in the most superficial sense. Karla’s entire job description boils down to “rock Wesley Crusher’s world”; said attempted rocking generally results in a broken bone, or a bruise if he’s lucky. Of all the characters’ sex lives, Wesley’s is the one I’m least comfortable reading about and least interested in. This is a deeply discomfiting subplot, and its inclusion here—to say nothing of the amount of time and space devoted to it—is a truly hideous blight on an otherwise pretty fun book.

The appalling Wesley subplot notwithstanding, Q-in-Law is a solid entry for the first Q book that isn’t an episode novelization, and it ranks comfortably among other mid-grade Q one-offs. Your opinion of it is likely to be directly proportional to how you feel about Q and/or Lwaxana hijinks in general, and is unlikely to transcend that feeling. The dialogue is really where this one soars, and it has a fun climax as well. This is one of those books that gets as far as it does on raw talent alone; if, as I hope, his later books rein in the disappointing puerile tendencies, Peter David will be earning perfect fives in his sleep.

I give Q-in-Law 3.5 out of 5 Sacred Chalices of Rixx. David is rather fortunate that the basic elevator pitch and his immaculate renderings of Q and Lwaxana are enough to carry the story by themselves, because there are more than a few moments that either grind the story to a halt or shoot it in the foot. Bottom line: however much you already like Q and Lwaxana—or maybe more accurately, how high a tolerance you have for their shenanigans—is liable to be the best barometer for how much you’ll enjoy Q-in-Law.

NEXT TIME: Back-to-back doses of Peter David with The Rift