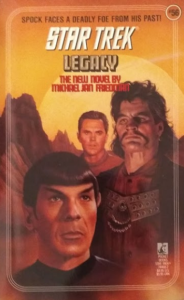 This week, Kirk and a motley assortment of lower-deckers get swallowed by an Alaskan bull worm and Spock comes down with an overactive thyroid. Before Scotty can mount a proper search-and-rescue, however, the Enterprise gets reassigned to a pirate takeover at the Beta Cabrini mining colony. Spock refuses to use sick time in order to keep crew morale high, but when the pirate leader turns out to be an old adversary, he thinks the answers may lie somewhere in his LinkedIn profile. Does Scotty know how close he came to getting court-martialed? What does it mean when Chris Pike starts seeing glitches in the matrix? How much of this book actually has any bearing on anything? All this and more in Legacy, the book that reminds you why Kirk wears the captain’s stripes.

The Enterprise is on a routine survey mission on Octavius IV—but you don’t have to have served a single day aboard a starship to know a routine assignment is always anything but. Sure enough, plenty goes sideways: Spock gets poisoned by the gentle caress of an otherwise rowdy gigantic grub-type creature, and Kirk and his team go MIA among the detritus of another separate worm attack. They’re able to retrieve Spock, but they lose the lock on Kirk and his contingent. Before they can turn so much as one stone, however, Admiral Kowalski says the Beta Cabrini mining colony needs their help more urgently than a missing landing party does. Scotty mounts an impassioned and frankly insubordinate defense, but nothing doing.

Unsurprisingly not content to ride the assignment out in a biobed, Spock tamps down the stomach bug with that good old-fashioned Vulcan discipline and briefs himself on Beta Cabrini. The mastermind behind the colony’s takeover is one Hamesaad Dreen, an “acquisitor” from a pirate race known as the Merkaans (not to be confused with the Mercans). Spock remembers squaring off with Dreen back when Pike captained the Enterprise in one or two of a series of dream flashbacks spurred by the poisoning sickness, and hopes to plumb those very memories for a solution to the present dilemma.

Legacy features numerous discrete threads and mini-threads, but there are four that comprise the bulk of the story. Because it bookends the story, we’ll call the Pike thread the “first” one. Every so often, the story goes on hold to drop in on Chris Pike on Talos IV, where he’s enjoying the beach, the sun, and his lady friend Vina, but also missing his old crewmates, especially Spock. After a subconscious flicker causes him to briefly see Dreen instead of the houseboy, Pike asks the Keeper for a psychic update, which, due to the distance the vision must cover, the Keeper says will take a while to process. While low-key and pleasant, these scenes are also, unfortunately, completely pointless. I don’t mind checking in on Pike from time to time, but these scenes have no bearing on the main action whatsoever and don’t bring enough to the table to justify the interruption.

Another element of questionable purpose is Dreen and the Merkaans in general. The Merkaans suggest a hybrid of Klingons and Orion pirates but aren’t as interesting as either. Their generic makeup raises a big question: why not just use the Klingons and/or Orion pirates to begin with? I will grant that it must be tempting to move away from the more time-worn villains, particularly Klingons, but they also have a strong track record of fascinating subversions and character growths to go along with that heavy use. Much like the Pike scenes, the Merkaans simply don’t add a whole lot of value.

It isn’t all negative criticisms and charges of dubious usefulness though. By a rather wide margin, my favorite parts of Legacy are those following Kirk and his survey team, which consists entirely of red- and blueshirts. Kirk doesn’t often hang out with lower-deckers, so this is a nice chance to see how he gets on with junior crewmen. As it turns out, he acquits himself rather nicely. Forced to make the best of a dire situation, Kirk keeps his team’s minds focused on single tasks, provides levity without getting glib, and does a lot of the down-and-dirty work himself. He handles injured officers, pitch-black darkness, sheer cliffsides, and the scientific and archaeological discoveries they make along the way with aplomb and fearlessness. Yet again, Kirk does the “will we/won’t we/we want to/but I’m the captain/we can’t/it wouldn’t be right” tango with a lady scientist, and that’s pretty thin gruel, but it’s far from annoying. Overall, I really like how Kirk carries himself and supports his team in this adventure.

Legacy holds together decently as is, but what’s really unfortunate is I think it was close to working really well. Instead of being set during TOS with intermittent dollops of Pike-era flash fiction, it probably would have done better to have simply been set during the Pike era. For one thing, the Merkaans might not have felt so stale with fewer concurrent Klingon comparisons dangling in front of and around them. It would have also eliminated the need for Pike’s overwrought agonizing over what Spock ultimately did or didn’t learn from him that provides the book with its title and half-baked theme. I imagine fans are and always have been hungry for new Pike stories, so why dance around it? Why not go all in?

Although there are a fair amount of missteps worth holding against Legacy, on the whole I actually found it breezy and modestly entertaining. There’s a purity of joy in watching Kirk get along so easily with junior officers that really shines through in those segments, and although there’s nothing unusual about the level of adversity they’re facing, watching the particular way the secondary senior officers held it together and leaned on each other was well done. Additionally, the strong execution of the Pike sections despite their lack of utility portends good things for future stories involving the character. Considering all these high and low points share the same slice of real estate, it could be a lot bigger mess than it ultimately is.

“Beta Cabrini has quite a supply of dilithium, not to mention duranium, berynium, and dolacite. Certainly enough to make a tempting target for the Klingons or the Romulans. However, the colony is nowhere near either one of those empires, which is why security there has been minimal. As I understand it, they don’t even have sensors in place.”

Okay, sure, but be that as it may … this is SPACE we’re talking about. It’s not just Klingons and Romulans out there. There is any number of threats out there that could take out a humble little mining colony in an instant. If you’re running any operation out there in the wild black yonder, you need good security, and you DEFINITELY need to be able to see it coming light-years away. Bad things can happen anywhere, anytime. This is really silly and short-sighted to me.

I give Legacy 3 out of 5 giant poisonous alien grub worms. Despite a bland, uninspired villain and multiple diversions of debatable value, Legacy turns out all right in the end thanks to some strong character work, particularly that which focuses on Kirk and Scotty. Not all of it needs to be here, but it’s almost all pleasant and executed well. I’m still awaiting the greatness from Michael Jan Friedman that I’ve heard some fans gush about and that I feel is in there somewhere, and I think we’re slowly but surely inching toward it. We just aren’t fully there yet.

NEXT TIME: An immovable object meets an unstoppable force in Peter David’s Q-in-Law