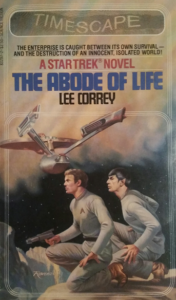 As I finish this post, we are but hours away from Thanksgiving here in the United States, and I can’t seem to come up with a good intro paragraph to cap it off. By the time this goes up, it will be too late to use this post to duck into the bathroom and avoid your family for an hour, but hopefully it will be timely enough to use it to avoid crowds of mindless consumers trampling each other as the Christmas shopping season gets underway. Regardless of the time of year, it’s never a bad idea to hole up in the bathroom with your good pals here on the Enterprise and at Deep Space Spines and binge the archive until your legs fall asleep from sitting too long. Anyway, thanks for reading, and please enjoy your regularly scheduled weekly Trek literature review.

The Abode of Life
Author: Lee Correy
Pages: 207
Published: May 1982
Timeline: After TOS but before Motion Picture
Prerequisites: None

Just like at the beginning of The Entropy Effect, our intrepid crew is studying gravitational fluctuations. Spock warns that they could get pretty bad, and pretty bad they get: the fluctuations fling the Enterprise thousands of parsecs off course and take out an entire warp engine. It will take over a century in the condition the turbulence leaves them in to get back to known space, so they decide it’s either get busy limpin’ or get busy dyin’.

Uhura notices a constant stream of transporter activity coming from somewhere near them in what is literally the only thing she does in the entirety of the book (she gets a nice compliment for it though). Where there are transporter radiation signatures, there must be life, and sure enough, they find a planet not far from their position. Kirk beams down with an interestingly configured landing party: Scotty, to figure out how to go about fixing the warp drive; McCoy, pretty much to keep everyone from getting too sick from eating alien food; and Janice Rand, for (straight from Kirk’s mouth) “a woman’s point of view”, whatever the heck that means in the 23rd century—presumably, to occasionally say something mildly insightful but otherwise not really do a whole lot else. (Too bad, that. Both Janice Rand and her actress Grace Lee Whitney were rarely done right by the series. It’s hard not to be disappointed that it continues into the books as well.) They want to try not to bother the natives, but end up beaming down directly into the middle of a duel. So much for being discreet!

Orun, Othol, and Delin (the natives they meet) have a hard time wrapping their minds around the fact that Kirk & Co. aren’t from Mercan, the planet they’ve landed on. Mercan is surrounded by interstellar dust that blocks out the stars, so no one believes anything exists in the universe beyond Mercan. While Kirk attempts an explanation, the police, led by Proctor Lenos, show up and take the landing party to the leaders of the planet, the Guardians. The Guardians assume the landing party are genetically engineered creations of Orun’s faction, the Technic, and put them on a house arrest on an island that’s pretty luxurious but inescapable without transporter controls, which they confiscate, leaving our quartet to figure out how to bust out.

The Abode of Life is our second Trek novel (after Roddenberry’s Motion Picture novelization) written by a one-and-doner, Lee Correy, which is actually a pseudonym used by a guy named George Harry Stine when writing sci-fi novels. Of course, to even be able to write a Star Trek novel, you have to have been previously published elsewhere, but he was no scrub: he was friends with Robert Heinlein, and in addition to a twelve-installment series called Warbots, he wrote a ton of non-fiction books about model rocketry, a field he was evidently instrumental in pioneering and a hobby my dad tried to get me into when I was a kid that I enjoyed intermittently.

I kind of wish he’d written more, because even though it’s not entirely successful, The Abode of Life shows promise. Correy attempts a peculiar gambit with his story-building, which is that he stacks several high-concept mini-ideas in order to make one big premise that can briskly carry a book for 200 pages. A planet is surrounded by interstellar dust, so its people can’t see any stars in the night sky, and therefore they don’t believe anything exists beyond their own world: I like it. They’ve somehow arrived at the invention of transporter technology without help or influence from other species: intriguing. Because they transport everywhere, the Mercans have no concept of time or distance: logical, and fascinating. Everyone on Mercan carries a sidearm because they have to be prepared to back up their opinions with their life at any moment: scary, and maybe it could have something relevant to say about our trigger-happy social climate. They all have to go underground every now and then because their volatile sun licks their planet with intense electromagnetic activity: that’s a neat wrinkle. Probably any one of these could support a novel on their own, but here we get them all in one.

Most of these mini-concepts get shunted to the side at one point or another and resolved with a whimper—for example, the extent of the origin of Mercan’s transporter technology is essentially “they’ve had it so long they take it for granted”, and the firearm thing doesn’t ever really come into play aside from everyone deciding to stick to the custom so as not to appear weak or cheese anyone off. Eventually, the story pares down to what ends up being its main conflict, which you think is going to be getting the ship repaired discreetly without bothering the natives but turns more into convincing the Mercans of the truth of their origins while violating as little of the Prime Directive as possible, and while they’re at it, let’s try to convince these folks to join the Federation, because this will be an important trade post once this part of space gets properly explored and we need to beat the Klingons to it, and also just why the heck not?

The population is divided into three factions: the Technic, who believe in science as well as, increasingly, the possibility of life beyond Mercan; the Proctorate, a police force that has become a mere figurehead, transporter technology having long since unified the planet’s culture and the code duello keeping people accountable for their actions; and the Guardians, the theocrats who have all the leverage because they have access to ancient technology and calculations that can accurately predict when the Ordeal is going to happen. During the Ordeal, electromagnetic activity rips across the planet, and everyone has to go deep under the oceans in shelters called Keeps so the Ordeal doesn’t kill them. Come to think of it, there are a lot of proper nouns in The Abode of Life, about half which it’s debatable should actually be capitalized.

To save the Enterprise’s crippled bacon during one of these Ordeals, Spock ends up firing a couple photon torpedoes into the planet’s sun, Mercaniad, to stabilize it, which has the side effect of ending Ordeals altogether. In the process, they also end up taking away the Guardians’ leverage over the society. I’d personally call this a massive Prime Directive violation, but there seems to be this prevailing sense that the tide was going to turn eventually anyway, with the Technic soon to out-populate the other factions, and anyway it saved the Enterprise, so who cares? and thus no real consequence comes of it. With those shenanigans, plus a naked display of power where Kirk has Sulu fire the ship’s phasers into a lake to boil the water, the Enterprise holds all the best cards, and they can start maneuvering the Mercans into the next phase of their galactic development.

For a Prime Directive story, it ends up being strangely low-stakes. The landing party is able to use their communicators and phasers more or less freely because the Mercans have no idea what they are, so the landing party has some pretty big advantages that most episodes would likely find a way to relieve them of. Kirk takes each group up to the Enterprise one at a time, starting with the Technic and ending with the Guardians, and once faced with the beauty of the cosmos, they all fold pretty quickly, including the otherwise obstinate Guardians, and they all have a very civil meeting about how they should go about joining the Federation. I’m always weirded out by stories that involve a handful of people making the Federation decision on behalf of an entire planet. So now Pallar and the other Guardians and Lenos and Orun, etc., all have to go back to the planet and tell everyone, “Hey everyone, you know how you all believed we were the only Abode of Life in the universe? That’s not true at all. Don’t ask questions, just trust us: it isn’t. Also, we’re now members of a thing called the United Federation of Planets. We didn’t ask you if that was okay, because we know you’re going to love it. Please shift your paradigms accordingly.” I want to read a book where a council of like five people decides to join the Federation and the entire rest of the planet is super uncool with it but Kirk is like “oops, no takesy-backsies”.

After the Prime Directive mess and subsequent Federation enrollment get sorted out, Orun and Delin (another woman who didn’t get to do a whole lot in this book other than exist) tag along as ambassadors, ready to fill their heads with the wonders of a universe they just confirmed the existence of a few days prior, and the Enterprise heads back toward known space and new adventures.

The Abode of Life is a brisk, adequately entertaining read that threatens to crumble if subjected to excessive scrutiny. There are better Trek reads and there are worse ones. This one contains a number of fascinating elevator pitches, each of which could carry its own novel. Some of them are explored at sufficient length, while others unfortunately got hung out to dry. Overall, mild recommend.

NEXT TIME: Star Trek II: The Wrath of Khan