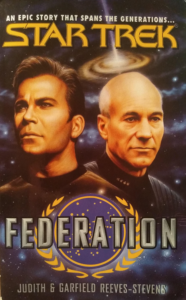 This week, when Zefram Cochrane’s warp drive starts to get its space legs, it isn’t long before a shady character comes a-callin’. But when Cochrane tries to tell him the science he wants won’t work, it sets off an intergalactic chase that spans hundreds of years and discarded body parts. Why does the Starfleet emblem look the way it does? Who invented inertial dampers? And how many people attended the final World Series? All this and more in Federation, the book where Chekov finally spills the beans.

Fans of Star Trek no doubt wondered if the Original Series and The Next Generation would ever cross over from the moment the latter premiered, and no doubt moved up to openly clamoring for it when the latter started to actually get good. In 1994, twenty-eight years after it first aired on viewers’ TV screens, that dream finally came true. At long last, the old guard and the new blood were united in one epic adventure that encompassed all of time and space. With bated breath, audiences trembled in anticipation of getting to see the two legendary Enterprise captains, James Tiberius Kirk and Jean-Luc Picard, stand side-by-side and cooperate on a mission of unprecedented galactic import. And that crossover, the event that brought those two titans of space exploration together in the twilight of 1994, was…

…Star Trek Generations. (Which we’ll talk about in a few weeks.)

But in the immortal words of a wrinkly old Muppet from another famous Star franchise: “There is another.” Off in the lonelier, less celebrated literary arm of the Trekverse, a similar though no less grandiose story was released a mere 17 days before its silver-screen counterpart. Because of that scheduling proximity and several superficial plot details, it’s practically inevitable that one might try to compare Federation not just to Generations but also to First Contact,1I haven’t watched First Contact in a very long time, but I wonder how this book will inform my perception of it once we get there.though really it’s not much like either of them at all. Truthfully, it strains credulity to even call it a crossover.

First proposed in 1987 when The Next Generation was still in preproduction, Federation was gently rejected for being too ambitious at the time, a reason that seems at best mildly silly when you’re talking about Star Trek. It took a few more lumps over the next few years, until finally, in 1992, Pocket Books contacted the Reeves-Stevenses and asked them to resubmit it, claiming the time had become right. Whether this story required a “right time” to come out is, in my opinion, somewhat debatable; given the core ideas and basic outline, I imagine it would have turned out excellent no matter what form the final product took. That said, a full-crew crossover in one medium or another was only a matter of time, and if any story would merit one, Federation is it.

Federation follows three different tracks that gradually converge on a single climactic point. In the first, Zefram Cochrane has just returned from the first successful extrasolar warp flight, and his top patron, the mysterious Micah Brack, is excited about the possibilities, but also wary. Brack is aware of both the impending arrival of Adrik Thorsen, a colonel in the eugenics-favoring Optimum Movement, and of Thorsen’s intent to attempt to suppress Cochrane’s discoveries. Having already made moves to make his patents open-source, Brack arranges for Cochrane to leave the solar system to avoid detection, urging him to return only when it’s safe.

Against his better judgment, Cochrane comes back a touch early and winds up arriving at Earth during the peak of the post-atomic horror, where he is promptly arrested by Thorsen following a brief escape attempt. Thorsen believes that one of the parts in Cochrane’s technology, which once wiped a station on the moon out without a trace in a malfunction, can be harnessed to create a no-muss-no-fuss “warp bomb” that he can use to enforce his twisted idea of peace and keep the Optimum Movement in power. Ethical considerations aside, Cochrane tries to explain that the science to make that sort of thing any bigger simply isn’t possible. But Thorsen’s refusal to accept that outcomes escalates Cochrane’s polite demurring into outright refusal, and Cochrane finds himself forced to go on the lam again. He’s safe for about 40 years until Thorsen catches up with him again, at which point he puts his ship on autopilot and sets a course for the Nowhere System, population nobody. After forty days in the space desert, he’s found by the Companion, who takes him to the planetoid where the Enterprise eventually discovers them in “Metamorphosis”.

Meanwhile, over on the TOS side, Kirk receives a visit from Admiral Quarlo Kabreigny, who’s so severe she makes Admiral Nechayev look like Captain DeSoto. Kabreigny demands to know why Kirk attested that Nancy Hedford died five months prior when she is in fact very much alive and pleading for Kirk’s help. Spock learns via some informal inquiries that the Starfleet Archives were breached and Kirk’s personal log about Cochrane was stolen. Kirk suspects someone is going after Cochrane armed with that knowledge (among other things) and teams up with Nancy the Companion to track him down and rescue him from his captor. And in TNG times, the Ferengi tempt the Enterprise-D with a scrap of Borg cube. Barely surviving a scuffle with the Romulans at the rendezvous point, the Enterprise acquires the Borg chunk and hits a bigger jackpot than they could have dreamed: there’s a Preserver artifact embedded in it. But when they hook it up to the ship, it changes their course, sending them inexorably toward a black hole.

Like the Reeves-Stevens’ previous novel, 1990’s Prime Directive, Federation is nothing short of outstanding. Having read it, it comes as little surprise that the couple was hand-picked as writers for season four of Enterprise solely on the strength of it. The only complaint I could possibly think to bring against it that isn’t purely semantic is that there’s sometimes a feeling of, as Milhouse van Houten once so eloquently put it, “when are they going to get to the fireworks factory?”—but even that’s to be expected on occasion from a novel that’s nearly 500 pages long. Federation is packed to the gills with compelling action, riveting narration, and even the occasional well-earned bit of comedy and/or emotional pull.

Best of all, it’s truly a “where no one has gone before” kind of story. There are two pages near the end of this book—if you’re familiar enough with it, you might be able to guess which ones—that I have probably reread, no lie, at least fifty times between finishing this book and writing this review. Those two pages may very well be the true heart and soul of Star Trek, and everything—in this novel and in all the shows—builds toward them. They serve as a refreshing reminder that even our wildest dreams today will one day look hopelessly limited from a new perspective.

I doubt this level of praise will come as unexpected to anyone. Federation is mesmerizing, a first-ballot contender for a top-three “if you only read a few Trek novels ever, it needs to be these” list. It’s no exaggeration to say that more than any other Star Trek novel, and even more than a great majority of television episodes, it is the essential expression of Star Trek‘s highest aims. If you’re into the books and you haven’t read this one, fix that. If you’re not and you’re mildly curious, it may be the single best spot to dip a toe. The only problem with that is, if you end up wanting more, it’ll be almost all downhill from there.

I strongly recommend Federation. There’s a reason this book managed to endure as a fan favorite despite its events and timeline being invalidated within two years of its publication. The story it tells is way more than merely TOS and TNG joining forces or a Zefram Cochrane joint. Federation gets down to the very core of everything Star Trek is about and paints the whole picture, a panorama of the full breadth and meaning of the journey. It is absolutely spectacular, and everyone who counts themselves a Star Trek fan needs to read it. Near the very peak of the Star Trek literary experience, if not the peak itself.

NEXT TIME: It’s off to the Gamma Quadrant to retrieve some stolen Antimatter