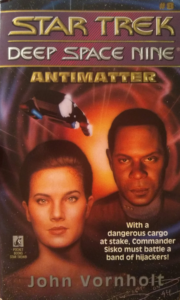 This week, when everyone’s favorite volatile starship fuel gets a day in the limelight, some Bajoran terrorists yank it off the stage. But when Sisko and Dax follow them through the wormhole to retrieve it, they have no idea just how bugged their hotel room is. Can the computer calculate your odds of scoring a hot date? Is there a Doctor on the station? And who’s been tapped to replace Sisko? All this and more in Antimatter, the book whose combadge location is better left undisclosed.

Antimatter
Author: John Vornholt
Pages: 276
Published: November 1994
Timeline: Late season 2, between “The Wire” (S2E22) and “Crossover” (S2E23). However, because it was written around the end of season one or beginning of season two, the Circle receives an obligatory cursory mention
Prerequisites: None

As a show of trust, the Federation is allowing the construction of an Ambassador-class starship on Bajor. If successful, the project could be a major boon for the struggling planet’s post-Occupation economy. But of course, no one knows how to trip over their own feet quite like the Bajorans, and predictably, problems arise from within. First, an explosion takes out the arch Sisko and Kira are standing on, nearly killing both. Then, a group of terrorists in Klingon Birds of Prey makes off with the tanker holding the antimatter intended for the new ship and absconds to the Gamma Quadrant with it.

Sisko, Dax, and Odo give chase in the runabout Mekong, eventually tracking them to the planet Eco, home of the Ecocids—small insects that don’t amount to much individually, but together use their electrical conductivity to form an advanced hive mind that speaks to visitors through a network of computer terminals. The Ecocids are friendly and profit-minded, like a sort of bug Ferengi—who, speak of the devil, are also in the neighborhood, arguing with the rogue Bajorans over matters of antimatter. Sisko and Dax introduce themselves as private arbitrators Marcus Garvey and Jade Dixon and insinuate themselves into the negotiations. Astoundingly, when the Bajorans try to confirm their identities, the Ecocids lie on Sisko and Dax’s behalf to ensure their safety.

But Sisko knows they can’t rely on that cover for long, and that the Ecocids could just as easily lie against them as for them. Additionally, the lead Bajoran, Rizo, is becoming increasingly unhinged, the Ferengi are growing impatient, and even the Ecocids themselves demand a piece of the action. Meanwhile, on the Alpha side of the wormhole, Major Kira gets it from all sides as she prepares the station to receive a replacement commander; braces for the possible arrival of more aggressors; contends with Admiral Nechayev in a standoff between two formidable forces of will that creates some crackling energy; and still somehow finds time to get to know Jon Rachman, captain of one of the cruisers that escorted the antimatter tanker—a bossy, arrogant hothead who eventually calms down and turns out to be a pretty decent dude.

Antimatter struggles mightily with some early hurdles, and though it regains some footing by the second half, it never fully recovers. The biggest issue by a fair margin is Vornholt’s questionable take on Dax. It’s not surprising that Jadzia would occasionally grapple with questions of where her personal femininity fits in with the responsibility of hosting an alien creature with other goals who doesn’t share those concerns. But I’m not convinced that Vornholt is the right person to address the subject. Early on, Dax uses nearly all their bilbok (Ecocid currency) to buy a sexy golden dress1which she’s wearing on the cover, though it’s hard to tell unless you’re looking at the full piece of artwork that she argues will play well in the Jade Dixon persona. And while it is all part of a plan, I could nevertheless live without the couple dozen opportunities it opens up for Ferengi, Bajoran, and narrative male gaze.

Arguably, an even bigger problem in this vein is how Dax herself is written. I don’t take issue with any assessment of her as a fundamentally serious-minded individual, but this book makes her seem like a naif, completely hapless about her sensuality and surprised by the power it holds over men. Even for an early incarnation of the character, this feels way off base. Jadzia is plenty sharp, and the idea that she thinks of her sexuality as merely a curiosity best suited for detached clinical study or that she needs to tap into Curzon’s memories to understand how to loosen up a little is kind of insulting. It’s a compelling subject, but one I wish could be explored outside a context of imminent personal and/or plot danger, and also by someone more qualified to do it.

Some of the book’s components start to produce interesting fruit late in the game. I liked the Ecocids; even if they are a bit redundant and too easily dealt with, “insects with Ferengi profit motive and a pinch of Vorta obsequiousness” is a tasty elevator pitch for a species. And Captain Rachman’s character growth and attraction to Kira are both charming. But it doesn’t add up to enough to overcome that unsavory initial impression. Besides the Dax ickiness, it thinks a little too highly of its own central metaphor. Has it ever occurred to you that people, much like antimatter, can often be highly unstable and unpredictable? Antimatter treats this as a revelation of the highest order. It only wishes it had anything so profound in it.

I do not recommend Antimatter, a book that is irreversibly damaged by having both the sexual and philosophical maturity of a college freshman. By the time it gets into more of a groove with a fun new alien species and the solid handling of the business back at the station, it’s too late for it to recover from those early missteps. There are some things to enjoy here, but for the most part this one is, as the kids say, “not it, chief.”

NEXT TIME: A new student and a stowaway are both Prisoners of Peace