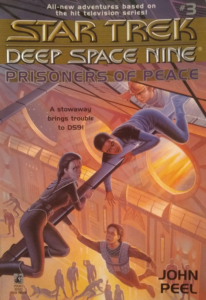 This week, Keiko’s class gets a new student, but the only class he’s interested in is Advanced Cardassian Murdering. But when they find a stowaway in the vents, they suddenly realize why there’s always cheesecake in the beef stew. Can the YA books handle full Garak? Is it harder to survive war or peace? And when did everyone turn British all of a sudden? All this and more in Prisoners of Peace, the book that may very well lay claim to the franchise’s first adorable Vulcan.

Keiko’s class receives a new student, a Bajoran boy named Riv Jakar. Jakar is about Jake’s age, but it’s a hard fifteen; all he’s known his whole life is killing Cardies. Jakar does little to ingratiate himself to his peers. He has no patience for what he calls the “soft, fat, and lazy” children of Deep Space Nine. He mocks a classmate’s failed replicator repair attempt, spoils for fights, and openly opines that somebody ought to do something about that tailor Garak. With both of his parents now dead, Jakar lives with his uncle, Riv Bothna, whom, like everyone else he meets, he despises—and the feeling is more than mutual.

Jake and Nog catch Jakar breaking into Garak’s shop and sneak in to observe him. When he leaves, they discover he’s left a bomb. Nog manages to defuse it while Jake breaks them out with a laser cutter, but Odo catches them on the way out. Despite Jakar doing less than nothing to deserve clemency, Jake tries not to rat him out, but Odo has already figured out it was him and remands him to his uncle’s custody. It’s clear from just a single brief interaction between the two that a lack of familial love is certainly a significant contributor to Jakar’s attitude, but a hug isn’t exactly going to solve his deeper issues.

Meanwhile, Ashley and T’Ara (yes, there are girls in this book!) determine someone is deliberately messing with Ashley’s replicator repairs, eventually figuring out it’s a Cardassian girl living in the ceiling above the classroom. Reasoning that she must have come over on the Cardassian freighter that stopped by a week prior, the class learns her name is Kam Gavron—daughter of Gul Gavron, who’s going to be royally cheesed when he finds out where his progeny ran off to. Kam fled because she wants peace and friends, two things Cardassian propaganda about the Federation doesn’t rightly cotton to. But she’s got more to worry about than an angry daddy; there’s also a Bajoran boy traipsing about the station who would love to make hasperat out of any Cardassian he can get his hands on…

Because they’re the only recurring teen characters, it’s somewhat understandable that the DS9 young-reader books will probably default to being The Jake & Nog Show most of the time, and that’s fine. But there’s potential there for more, and John Peel is the first author to really tap into it, in multiple ways. Adding new characters helps fill in the gaps in the boys’ temperaments and talents, and making those characters girls is a much-appreciated breath of fresh air. Those girls here are Ashley Fontana, 10, who’s good with gadgets, and T’Ara, 7, a Vulcan who—being, yanno, 7—has not quite gotten the hang of reining in her emotions all the time. Ashley’s frustration rings true for kids and adults alike: it really does suck knowing you’re doing everything right yet not knowing why things are still going wrong. And T’Ara is adorable every time she briefly forgets not to smile or show surprise. Jake and Nog are certainly fun characters, but it’s nice to see different people get up to different things.

Prisoners of Peace also demonstrates that DS9’s propensity for darker and more complex subject matter isn’t limited to the TV show or even the adult novels. Riv Jakar talks enthusiastically about cold-blooded murder, and the story itself entertains the surprisingly heavy quandary of whether it might actually be tougher to survive peace than to survive war. It’s clear Peel put a lot of thought into this book, as well as into avoiding easy stereotypes and simplistic good/bad binaries. In doing so, he put together a novel that is profound and mature not just “for a kids’ book” but on its own merit. It might actually be a little weighty for its intended audience, but that doesn’t detract from its achievements.1Nor do the few semantic flaws I would care to point out, which are that Peel occasionally puts British pegs in American holes (Keiko gets discussions back on track by saying “Right”, and Jake refers to his friends on one occasion as “you lot”) and that it’s unclear whether he has a firm grip on Bajoran naming conventions until near the end of the book.

I’m a big believer in not talking down to children of any age—that you don’t have to tee up every ball for them, that they can handle a pitch with a little heat on it every now and then. Prisoners of Peace hits that sweet spot dead center, and in the process sets a high bar for the DS9 YA books. (The Starfleet Academy books are somewhat strong-armed by their nature into tending a bit more toward action.) It’s kind of ironic that Peel’s previous Trek outing, the TNG novel Here There Be Dragons, was kind of a trifle, albeit an entertaining one. It may turn out that he saves his tastiest morsels for younger palates.

I strongly recommend Prisoners of Peace. It brings a lot of great lessons to the table about letting go of blind hatred and coming to terms with the end of war. Even adults may be impressed by the depth and maturity shown in this book. Also, introducing new characters with diverse talents and winning personalities takes a lot of the burden of shenanigans off of Jake and Nog and opens up a lot of potential for anyone that’s willing to capitalize on it. This is a high bar for this line of stories to set, and I’m curious if anything in the future has a chance of clearing it.

NEXT TIME: Dr. McCoy tries to be The Better Man