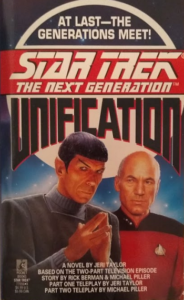 Whenever a TOS cast member makes an appearance on Next Generation, you can count on that episode receiving an accompanying novel. “Unification” is no exception. The season-five two-parter brought no less a luminary than Leonard Simon Nimoy to the show for arguably the highest-profile guest appearance of its entire run. It’s an actors’ showcase with lots of , riveting one-on-one showdowns, and memorable one-off characters, but the excitement can’t help but get at least somewhat lost in the translation to the page.

Admiral Brackett has intel so alarming she can only deliver it in person: a picture of Ambassador Spock traipsing around on Romulus. Needless to say, this trip definitely wasn’t authorized, and could compromise Federation security if word gets out about it. For the mission to retrieve Spock, Brackett grants Picard blanket authorization, which is Federation code for “You can get as crazy as you want with how you handle this, but if you screw up, get captured, or get killed, we never knew you.”

Picard visits Sarek on Vulcan in hopes of getting a lead, and although Sarek’s been rent nearly totally asunder by the ravages of space Alzheimer’s, he’s able to get lucid long enough to suggest that Spock may have a connection in Pardek, a Romulan senator known for his moderate nature. That’s all the impetus Picard needs to grab Data, dress up in a full-on Romulan getup, and hitchhike in a Klingon Bird of Prey into the thick of the Romulan Empire looking for answers. They’re not on Romulus long when they find the man they’re looking for, and he’s none too happy to have the Federation meddling in his affairs. Is he totally off his nut, or is there something to his idea of reunification between Vulcans and Romulans?

Obviously, what’s good for ninety minutes of television doesn’t necessarily make for robust literature. To that end, Taylor has packed it out to an acceptable minimum length with extra subplots and/or lore for many of the episodes’ more prominent characters, including Riker, the Klingon captain K’Vada, the four-armed musician Amarie, and the Romulan boy D’Tan. Literally every one of these additional threads adds a varying degree of horniness to its character. Riker, disappointingly though unsurprisingly, gets saddled with yet another romance that his position as first officer would make it irresponsible to pursue. This time, he’s got eyes for Ensign Gretchen Naylor, a security officer who’s so married to her job and drop-dead boring Riker has to order her to take up a hobby. At the extreme end of the horny spectrum, K’Vada, the Klingon captain that takes Picard and Data across the Neutral Zone, regularly fantasizes about sweaty, violent sex with his wife K’kam. Even D’Tan suddenly hits puberty while observing a girl he’s known and long been friends with through a grate he enjoys the hidden secrecy of, though you get pretty severe emotional whiplash once a scene breaks out and she’s brutally massacred. None of these add anything essential to their respective characters, but Taylor had to fill the gaps with something, I guess.

I always go back and watch any movie or episode that has an accompanying book before I read and write about it. Re-watching “Unification”, I was pleasantly surprised by it; I wouldn’t have had much good or bad to say about it before, but the acting and pacing are top-notch. Mark Lenard turns in what may very well be his best ever performance as Sarek, and Nimoy really brings out Spock’s exasperation with the Federation’s endless parade of red tape. The other supporting characters are no slouches either, especially Klim Dokachin, the space junkyard manager whose species’ renowned boring personalities and lack of creativity initially mask his winsome dry wit.

Jeri Taylor’s involvement with Star Trek is longstanding and -reaching, beginning as a supervising producer on Next Generation before eventually becoming showrunner in the final season, but her most extensive work with the series would be on Voyager as executive producer during the first four seasons. This, however, is the first time she wrote a novel for Pocket Books. It seems both unusual and unfair to have someone already so deeply involved with the television side of the franchise add writing an entire novel to their already piled-high plate, and neither does she slam-dunk it nor crash and burn. Capitalizing on the extra attention a Nimoy cameo brings the show makes a reasonable amount of business sense, but there’s no pressing reason anyone should opt for this telling of events over the TV show, or even supplement their viewing with it.

I give Unification 2.5 out of 5 ketchup-doused omelets. When it sticks to the events of the episode, it does a decent job, albeit with no extra pyrotechnics. When it starts getting away from that and into things that didn’t make it to TV, it starts veering toward trouble. No one except completionists and the morbidly curious need to spend time on this one. Anyone else is better served by simply revisiting the episode.

NEXT TIME: Blinking lights and other revelations in Perchance to Dream