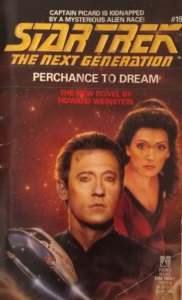 This week, the lights are on at Domarus IV, but no one’s home—or so the Enterprise thinks. A jalopy from the Teniran Echelon shows up to call dibs on the planet, but Picard wants to see some license and registration. But when shuttles and captains start to disappear in Laser Floyd clouds, the two crews demand answers. While Data and Deanna try to keep the campers happy, Picard and the Teniran captain are stuck playing Darmok and Jalad at Minecraft. But will Picard open his arms wide? or will the walls fall at Domarus? All this and more in Perchance to Dream, the book that teaches us that sharing truly is caring.

Since there’s no apparent sentient life on Domarus IV, the senior crew is allowing some of the kids, including Wesley Crusher, to tackle this survey—with adult supervision, of course, provided by Data and Deanna Troi. The other two adolescent surveyors are Ken Kolker, somewhat of a sensitive gentle giant with interests outside his career track, and Gina Pace, whom you may or may not remember from Weinstein’s previous TNG novel Exiles as an artist who wanted to draw Wes, prompting a line of thoroughly inappropriate questioning from Geordi. As they leave, their shuttle, the Onizuka, is captured in a tractor beam by a ship from the Teniran Echelon, who lay claim to Domarus IV. In the middle of the Enterprise’s attempt to persuade them to release it, the Onizuka vanishes without a trace in a cloud of blinding light, a phenomenon for which the Enterprise data banks can find no precedent.

While the two crews argue about who’s responsible, the same phenomenon engulfs the two captains, Picard and Arit, and dumps them on the planet surface, where they appear to be expected to survive off the land and learn to get along. Data and Troi and the kids, meanwhile, have been deposited some kind of cave, and their chances of finding an exit the Onizuka can fit through are looking as small as the cave’s branching tunnels. Occasionally, they are observed by some twinkling lights, which they gradually begin to take greater notice of.

Those twinkling lights comprise the intelligent life the Enterprise survey was looking for. As it happens, they were in the middle of a thousand-year slumber and took interest in the Federation and the Tenirans after being woken by their bickering. The book follows only two of the twinkling light characters to any significant extent. The first, Ko, believes the humans and Tenirans count as “Life” and can be communicated with. The other, Mog, thinks Ko is both dumb and blasphemous, and gives her a deadline of two “cycles” to prove her bizarre heresy before they all move on dot org.

As I first tucked into Perchance to Dream, I found myself getting swept up in it more easily than I have with Trek novels of late, and most of it had to do with how strong a grasp Weinstein has on their conversational styles. With this book, his literary contributions to Next Generation now (so far) outpace his TOS output, and the evolution of character understanding across the three books shows. Characters’ speech is finally becoming as naturalistic in the books as it is on TV. There have been some bad TNG novels lately and some decent ones, and even a few that flirted with greatness, but Perchance to Dream is the first one in a while that just feels right.

Often, Weinstein’s Trek novels highlight some sort of social issue, and he’s one of the only Trek authors whose books regularly demonstrate the franchise’s utility as a platform for topical social issues. There’s not quite anything explicitly mirroring a real-world issue here, but there’s still something in here that might resonate with a 2019 reader. Unbeknownst to the Enterprise for most of the story, the ship they’re seeing is the Tenirans’ only ship, a ratty colony ship that’s carrying the entirety of the remaining Teniran population and is about one reactor failure away from going up in flames. The Tenirans, still wanting to believe they’re great and have plenty to be proud of, withhold as much information about themselves and their ship’s condition as they can in order to hang onto what few tatters of their pride they have left. At times, it’s an uncomfortable reminder of the darkness lurking behind our own leaders’ puffed-out chests.

The Tenirans are quite well fleshed-out antagonists. All of the featured leaders are sympathetic, even Egin, the only remaining representative of the Teniran government, whose blowhard nature and compulsive need to have every decision run through him belies the fact that he cares very deeply about the fate of his people. Arit learns to let go of her pride and distrust of the Federation and accept help offered in good faith; it helps that she has a daughter to act as a stand-in for the generation she should be working hard . I enjoyed the time the story spent with the Tenirans, and the heightened sensitivity to their plight makes up for the comparative lack of development of the twinkling light people.

Perchance to Dream isn’t going to knock your socks off, but I enjoyed it more than most recent TNG efforts, even some that I technically scored higher than this one. It’s mostly the stellar character renderings that are carrying the day on this one. When you get down to the actual nitty-gritty of what everyone’s up to, it’s a bit of a snoozer, but Weinstein makes the characters fun enough to simply hang out with that it ultimately doesn’t matter too much. Also, the ending is a little too pat—what do sentient lights who can literally reshape matter however they want need with Federation membership?—but tone-wise, it works for what is overall a fairly low-stakes adventure, especially considering an entire civilization’s continued survival is on the line.

I give Perchance to Dream 3 out of 5 twinkling sentient lights. It’s a bit slight for a Weinstein effort, but there’s still plenty of good stuff to glom onto here. The main senior crew is very well portrayed, and the antagonists end up earning the reader’s sympathy rather effectively. If you appreciate the TNG crew primarily on the level of people you’d want to hang out with, this is an agreeable adventure that will scratch that itch for you.