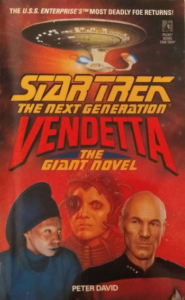 This week, an old gun destroyed by Kirk’s Enterprise turns out to have been meant for the Borg. But a new model is rolling off the lot, and its pilot will let Starfleet have it when they can pry it from her cold, dead hands. Meanwhile, a rescue team reclaims a lady Borg, and for once, Geordi’s interest in a woman comes across as sympathetic rather than creepy. How is Guinan involved? What’s Pulaski up to these days? What does an assimilated Ferengi look (and sound) like? All this and more in Vendetta, the event novel that dares the reader to wonder: maybe some of the species the Borg annihilate deserve it?

Vendetta
Author: Peter David
Pages: 400
Published: May 1991
Timeline: Sometime after “Data’s Day” (S4E11)
Prerequisites: “The Doomsday Machine” (TOS S2E6); “Best of Both Worlds” (S3E26 / S4E1); the idea of using a warp bubble to trap a Borg cube in time and space is a practical application of the bubble seen in “Remember Me” (S4E5); myriad other callbacks

In a prologue set in his days as an Academy cadet, Picard finds himself alone in being able to see a mysterious woman on the fringes of his daily life. It doesn’t help that he’s already mercilessly teased by his obnoxious rival Morgan Korsmo and ruthlessly berated by his professors. But he finally gets an up-close-and-personal visit from the diaphanous woman, who confirms a theory he posited earlier in class—viz., that the trajectory of the so-called “doomsday machine” (from the TOS episode of the same name) implies that it originated from somewhere outside the galaxy. She adds that it was created to combat “them”, which, given the book we’re reading, one can fairly easily ascertain means the Borg.

Meanwhile, in the present, the Borg are up to their usual shenanigans, carving up a planet called Penzatti and assimilating its people’s excellent computer technology. They get most of the way through the planet decimation, but are overtaken by the aforementioned doomsday machine cutting through them like butter with a beam of pure anti-proton. The Enterprise and the Chekov are dispatched to render aid, the latter now captained by kooky old Korsmo (and first officered by a pleasantly familiar face: Elizabeth Shelby). Although also a starship captain, Korsmo remains envious of Picard and his reputation, a character flaw that causes him to make some rather questionable decisions throughout the story.

As the planet-killer is a ship, it needs a pilot, and that pilot is Delcara, the selfsame woman of Picard’s Academy-era visions. Incidentally, Delcara turns out to be Guinan’s sister—or, more accurately, bonded to Guinan as a sister-figure in some vague, poorly defined way; I feel okay saying this because it ends up being far less integral to the story than the initial shock of the revelation might lead you to believe. Overall, there’s a lot less Guinan in this book than I was expecting and hoping for; she has premonitions and passes out, but doesn’t really do anything of import, nor do we get as much El-Aurian history and lore as I was anticipating, though that’s more my fault for setting up so much expectation.

Delcara is driven by a single simple motivation. Like a hipster bicycle, her mind has one speed, and that speed is revenge. After her race, the Shgin, were destroyed by the Borg, she wandered aimlessly until she was found and taken in by Guinan’s people. She developed a sisterhood bond with Guinan, got married, cobbled together a nice little second life, and then … well, the rest is history. Small wonder she’s so cheesed off. But don’t worry; although Delcara’s behavior is deemed completely unacceptable by just about everyone wearing a Starfleet uniform, it’ll be fine by the time Picard decides to draw the line here, this far, no further.

In the book’s other major subplot, Riker and the away team find a Borg corpse among the Penzatti wreckage, which is strange, because usually when a Borg drone’s link to its cube is severed, it simply disintegrates into a pile of ash. Against most of the senior officers’ better judgment, they bring her aboard with the intention of figuring out how she survived, divesting her of her Borg accouterments, studying her, and maybe, best-case scenario, successfully reintroducing her to Federation society and allowing her to resume her old life. Some light Googling identifies her as Reannon Bonaventure, a.k.a. the Brass Lass, whose list of achievements, intrepid spirit, and thirst for thrills evoke comparisons to Picard’s lady-friend Vash.

The idea of rehabilitating an individual Borg will come up in “I, Borg” only about a year out from this book’s publication. Perhaps more significant, however, is the concept of taking a female Borg survivor and trying to un-brainwash her. Even a casual fan is likely to draw the straight line from Reannon to Seven of Nine. The former arrives fully six years before the latter’s debut, perhaps the most impressive example of beating canon to the punch that we’ve seen to date. But Reannon is less Seven of Nine and more Seven of Nell. She only responds positively to things that remind her of being a Borg, much to Geordi’s chagrin, and worse, she can’t take two steps out of her room without being accosted by snide, vengeance-crazed Penzatti. As windmills go, she’s a formidable one.1This sentence will make more sense when you read the MVP section.

Vendetta is strong in a technical sense, but I wish I liked it more than I actually did. It is of course the first TNG novel to deal with the Borg beyond their encounters in “Q Who?” and “Best of Both Worlds”, which makes it fairly momentous—but man, is it a downer. It’s clear from fairly early on that Delcara’s quest for vengeance has caused her to get in way over her head, and by the time she starts blowing up Tholians, she becomes more of a primary antagonist than the actual Borg. The Reannon arc, however, is the one that concludes in the most tragic fashion by a wide margin. I don’t expect Star Trek to be all hunky-dory happy endings by any means, but the piling on is a tad excessive here. Still, Vendetta‘s themes of vengeance and the ultimate effectiveness of such are well worth ruminating on.

I have a suspicion most readers, especially casual ones, will be more satisfied with this book than I was, but it was far from bad, and anyway, differing opinions are the spice of life. Although I’m not always in the mood for Peter David’s insistence on a darker, more morbid flavor of Trek, it’s inarguably important that writers were pushing for it, especially at the time when Roddenberry was still alive and stubbornly standing in the way of his own creation’s potential. Plus, at this point, there were only three episodes in the Borg chronology, and they still had a bit of character evolution ahead of them. By the time we get to the sequel, there’ll have been much more groundwork laid down for a thrilling Borg yarn.

I give Vendetta 3 out of 5 planet-killers. The makings of an excellent story are all over this book, but it never quite manages to transcend the sum of its parts. Most characters don’t acquit themselves terribly well, and the whole thing being a net loss for all involved is a real bummer, more so than it might be in a roughly equivalent TV episode. Although there are many strong individual elements, passages, and characterizations, they’re not enough for me to hand out an unhesitating recommendation.

NEXT TIME: Spock and Bones go missing as Kirk deals with a Renegade