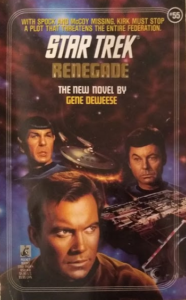 This week, some aliens want to see the manager, and unfortunately for Kirk, he’s the manager. But when Spock and McCoy go missing the second they beam down for negotiations, he has to figure out what’s causing his shields and sensors to go wee-wonky if he wants them back. Who wants revenge on Kirk this time? Do the Klingons know what they want? And how screwed would Starfleet officers be without tricorders? All this and more in Renegade, the book where nobody is who they seem.

Renegade
Author: Gene DeWeese
Pages: 276
Published: June 1991
Timeline: Year 5 of the five-year mission
Prerequisites: Numerous comparisons to “A Private Little War” (S2E19); also, “Court Martial” (S1E20), which technically counts as a spoiler if you know that going in, but this book isn’t good enough to lose sleep over that

The Enterprise prepares to receive Premier Kaulidren of Chyrellka. Some years prior, the Chyrellkans made it out to space and began exploring, eventually colonizing a nearby world they called Vancadia. Now, just two years before the Vancadians are scheduled to gain their independence from Chyrellka, they’ve begun to rebel. Lest you believe this is some sort of American Revolution in the making, however, you can go ahead and disabuse yourself of that notion up front.

Although ostensibly on hand to meditate, the behavior of both sides, particularly Kaulidren, turns even the simplest act into a Herculean labor. Kaulidren is stingy with useful information and believes his position is self-evident, while Delkondros, the person representing the Vancadians, sounds marginally more reasonable but nevertheless insists on meeting on his own terms. It’s already a knotted situation, but it really takes a nosedive when Spock and Bones beam down to Vancadia and a shield—one beyond the scope of the technological milestones they’ve reached—immediately goes up, obscuring their whereabouts and life signs.

From there, Renegade follows two primary threads. Aboard the Enterprise, Kirk tries in vain to placate the agitated Kaulidren, who may as well be named Karen for how often he wants to speak to the manager, and gives the business to poor Lt. Pritchard, the replacement science officer trying desperately to figure out why the computer is giving increasingly contradictory information, and whose only crime is basically not being a Vulcan. Meanwhile, down on the surface, Spock and McCoy narrowly escape a skirmish and go on the lam with a councilman named Tylmaurek. Tylmaurek takes them to the only person he feels he can trust, a university professor named Rohgan, who listens to their side of things, says it’s “wild”, then asks them if they’ve ever tried DMT. Rohgan claims he has access to a ship, and Spock and McCoy have no choice but to believe him if they want to get back to their own.

If this book is in love with one thing about itself, it’s its largely pointless identity reveals. Kaulidren turns out to be Jason Carmody, a name previously tossed off casually in a list of committers of atrocities. He’s not a pre-existing Star Trek character, so the reveal means little if anything. Delkondros and several other human-looking types are actually Klingons. The only reveal with any impact is that of Hargemon, who shows up in the prologue and intermittently in the middle leading up to his reveal. Hargemon is actually Benjamin Finney—i.e., the guy who tries to get Kirk court-martialed in the episode [checks notes] “Court Martial” by pretending to have died on an away mission and tampering with computer records. The whole shield- and sensor-screwing business is his doing, and he probably wouldn’t have gotten caught if Kirk hadn’t recognized his handiwork, having been on the receiving end of it and all.

I don’t really get the Klingons in this book. Trying to make the Federation look bad and contriving extra-complicated situations and government coups to achieve that end isn’t really their M.O. It might be one thing if Chyrellka and/or Vancadia had natural resources they wanted, which generally seems to be the main reason they take an interest in a planet. But it seems like all they’re interested in here is catching the Federation with their pants down. TOS Klingons aren’t always consistently characterized, and they can sometimes be a lot of things, but this particular portrayal of chaotic evil doesn’t wear well on them.

Renegade is one of those books that makes you hyper-aware of the fact that the Enterprise generally tends to deal with only a handful of people in the course of bringing sweeping changes to how an entire planet conducts its affairs. Because it’s mostly not very good, it’s easy to allow the mind to wander, and what mine often drifted back to was: Kaulidren and Delkondros are so unreasonable that it’s like, can’t Kirk just go over these guys’ heads and try to deal with someone a little more willing to keep a cool head? And once they figure out that Kaulidren and Delkondros aren’t who they appear to be, doesn’t that point to much bigger problems—namely, how apparently easy it was for the Klingons and their co-conspirators to install themselves at the heads of government on both planets? They’ve got to be keeping a lot more important people under their thumb than just a random councilman and his professor friend.

Renegade does shine in at least a couple of areas. Its dialogue sounds right coming out of the characters’ mouths, and it’s at its best during frenetic space action sequences when everyone is stepping on each other’s lines. During moments that highlight one or the other of these qualities, it’s easy to get caught up in the book and enjoy it for what it was trying to be. But otherwise, it’s such a drag. It seems to know this, because it putters along at more or less the same rate until it has about ten pages left. Then it shakes off the sleepies, realizes it needs to wrap up, and hurtles toward an abrupt and baffling ending. I know there’s at least one more coming, and I try to have faith of the heart with each novel I pick up, but I’m not going to lie: I’m kind of hoping we don’t have too many more Gene DeWeese books to slog through.

I give Renegade 1.5 out of 5 false identities. After the back-to-back stinkers of The Final Nexus and The Peacekeepers, we got a bit of a cool-off period from DeWeese. Renegade, sadly, only confirms that that respite should have lasted even longer. Klingons that are too chaotic, silly identity cover-ups, developments that raise more questions than they answer, and a general lack of compelling action make this another one to avoid.

NEXT TIME: Wesley Crusher confronts the Boogeymen of his childhood