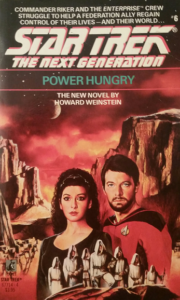 This week, the Enterprise-D catering team delivers a few cases of Rice-a-Roni to a planet that needs to take a chill pill in more ways than one. While the planet’s ruler pushes his one-world agenda and plays around with his wood, a rebellious religious faction can’t agree on a playlist—some of them are trying to spin “Hot in Herre”, others want to bump “F___ Tha Police”—but they all think Riker might be just the DJ their movement needs. Will women ever stop finding Data so fascinating? Will Worf make the jazz combo? Can Picard decide whether they do or don’t negotiate with terrorists before the heat death of the universe? It’s the book with special guest stars Nick Offerman and Harry Chapin.

It wouldn’t be a Howard Weinstein book if he didn’t talk your ear off in the introduction about this, that, or the other. In this round of author notes, Weinstein’s got Earth on his mind—specifically, the sorry state of it, at least as it was in January 1989. (Spoiler: it hasn’t gotten any better.) He also includes some pertinent lyrics from a song he’d apparently been listening to at the time: “Sounds Like America to Me”, from the Harry Chapin album The Last Protest Singer, a posthumous collection of songs released in 1988 that had been more or less ready for release when he died in 1981.

The main issue on Weinstein’s mind when writing Power Hungry, according to Voyages of Imagination, was world hunger, and while that remains an issue we haven’t done nearly enough to combat, it’s the climate element of the story that stands out the most here in the dire twilight of 2018. In October, the IPCC (Intergovernmental Panel on Climate Change) released a report positing that disastrous effects of manmade climate change will occur much earlier than anyone previously suspected: a number of cataclysmic crises could manifest as early as 2040, and we have just over a decade to get our act together. Naturally, this news has sent a lot of people into a deep blue funk, if not a full-on depressive spiral. And we’ve known this deep down—as my childhood pastor might have said, “we’ve known it in our knower”—for too long to have done as little as we have about it, as the publication date of this book should attest.

The crew is delivering five huge containers of famine aid to the planet Thiopa, and they’re having a bit of a day. The Ferengi have designs on Thiopa; the Enterprise is being buffeted by wimpy fighter ships from a mysterious alliance the ruler of Thiopa recently broke it off with; a grumpy ambassador is complaining that it’s too cold on the ship and they’re not delivering the supplies to the people who need them quickly enough; and worst of all, Riker has to listen to Worf play his Klingon fart-cello.

Thiopa is an absolute mess. They’re just getting over a breakup with the Nuaran Alliance, the group who gave them all the technology that’s allowed them to progress so quickly. They’ve completely stripped their natural resources—there are giant, hideous gashes in mountainsides from unregulated mining run rampant. The temperature of the planet is up more than a few degrees. Water is scarce. And the ruler of the planet is not getting along with the Sojourners, a tiny religious faction promulgating their outspoken belief that people should serve the land rather than force the land to serve them.

While Picard, Data, and Troi attend a lavish gala that turns an irresponsibly blind eye to the planet’s obvious problems, Riker and the ambassador, Frid Undrun, check out labor conditions and get abducted by Sojourners disguised as warehouse guards. Much of the latter half of the book is spent with Riker as he gets to know the Sojourners, hears their side of things, and assures them all the while that Picard will refuse to negotiate for his release. The Sojourners represent the greatest threat to Ruer Stross’s Fusion initiative, and they’d probably be even more of one if they could put a stop to their infighting. Some of them, like their leader Lessandra, want to kill ’em all and let God sort ’em out, and while most of the other adults appreciate her intensity, they’re ready to try something a little less crazy, like civil discussion. The book becomes a little imbalanced once Riker gets right in the thick of the Sojourner camp, as Ruer Stross and his side of things all but disappear until near the end.

In case the parallels between Thiopa and Earth don’t occur to you regularly throughout the book—and you’re living in a pretty thick soup of denial if you’re reading this in 2018 and they don’t—Weinstein repeatedly bashes the reader over the head with a sledgehammer in a section near the end that summarizes just how deeply and comprehensively Thiopa is screwed. As a thought exercise, imagine Picard or Data speaking any or all of the following lines from pages 201 to 204 directly to the camera:

Are you squirming yet? If you are, that makes two of us.

Even more frustratingly Earthlike is the fact that absolutely no one on Thiopa gives two rat doots about anyone other than themselves. Ruer Stross only cares about Fusion, his big plan to get everyone on Thiopa on the same cultural page. The Sojourners, especially Lessandra, are fully prepared to let everyone else’s bad decisions do them in and reclaim the planet once they bake to death. Kael Keat, a scientist who works with Data (and, like almost every female character in the TNG novels to date, finds him inexplicably attractive), knowingly placates Ruer Stross with the idea of a weather control net she knows is technologically impossible so that she can use the money to research things that actually matter on the down-low. I don’t think it represents any huge spoiler to say not a whole lot gets accomplished in this book. TNG is no stranger to bummer endings, and this one definitely ranks up there among the most depressing.

Another part of the book that looks a little different from the purview of 2018 is Lessandra. Lessandra is the leader of the Sojourners who took a far more aggressive approach to getting their message across after their previous leader, Evain, advocated for non-violence. In a quainter time, Lessandra would have seemed like a more obviously wrong-headed character, possibly even a little unhinged, but in an age when we’ve seen all too clearly exactly how much reaching across the aisle accomplishes, I can see more than a few people today thinking she’s on exactly the right track. It’s certainly a sign of the times that her point of view didn’t seem as extreme to me in my reading as I suspect Weinstein intended it to be.

Power Hungry receives a major boost from highlighting a social concern that not only remains timely to this day but becomes a more dire threat with each passing day that we don’t do anything about it. Without that going for it, it likely would have been just another average TNG novel, albeit one of the more competently written ones.1Weinstein so far holds the crown for best-written Data, with the fewest crash-and-burn attempts at cringe-inducing forced humor, and letting, by my count, only one contraction slip through the cracks. Unfortunately, we’ve only soiled the bed even worse since then, and we seem perfectly content to lie right smack dab in the middle of the stain. But hey, at least the songs about climate change have gotten better since then.

I give Power Hungry 4 out of 5 chuS’ugh solos. When you think about how often Star Trek has been a beacon for present-day issues and an engine for social change, you begin to realize how odd it is that the books rarely draw from that well. To wit, of the 56 books reviewed prior to this one, I could think of only two-and-a-half with storylines that had a reasonable parallel to current, ongoing matters of Earthly stewardship, and one of those was a novelization of a movie.2Those two-and-a-half books, to wit: The Tears of the Singers (TOS #19); Star Trek IV: The Voyage Home; and Weinstein’s own Deep Domain (TOS #33), which really only halfheartedly paws at issues of environmental import but has bigger fish to fry. This sort of thing is Star Trek‘s bread and butter, yet almost none of the books (so far) have attempted anything remotely close to it. That being the case, I may be overrating it, as I feel I sometimes do, but I think it’s a solid read, and one that is possibly more powerful now than when it was initially released. I’d even go as far as to recommend it to non-Trek fans if I didn’t think it would depress the crap out of them.

NEXT TIME: Looking into the face of God with Star Trek V: The Final Frontier