Despite being a month since the last installment, not much has happened that I feel I can put here. I’m still really excited about Magic: The Gathering, and I’ve also set a goal (not quite in stone, but the prospect excites me) to watch every Coen Brothers movie, since given the nature and personal success of this site I seem to be into body-of-work-spanning projects. 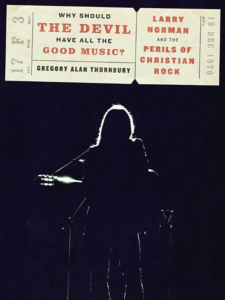 One thing I did pick up, however, was Why Should the Devil Have All the Good Music?, a biography of Larry Norman, the man generally considered to be the progenitor of “Christian rock” (though his approach was nothing like current trends in worship music and CCM). Larry Norman was a trailblazer who infuriated the religious establishment with his insistence on using rock ‘n’ roll to reach people and befuddled the secular world with his insistence on following God. The subject matter interests me greatly, because one thing I struggle with in my life is reconciling the (in my opinion) frequent blandness of worship music with the idea of musical talent being a God-given gift. However, I bought the book through a secondhand source and ended up receiving an uncorrected proof of the book rather than the final product, and for some reason this has put me off the book to the point where I find it almost impossible to pick up. It’s certainly no indictment of the book itself, which I very much recommend based on the 100 or so pages I’ve gotten through, but maybe there’s something about holding a finished product that either I’ve been taking for granted or never realized. Regardless, it’s evidently a very real and powerful feeling.

But really, outside of Star Trek, that’s it for me. We’ll see if I have anything else interesting enough to mention in two weeks.