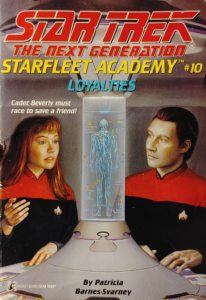 This week, when a student orders the seizure salad during a holodeck simulation, the teacher blames Cadet Beverly Howard’s best friend. But before she clears her roomie’s name, it’s always important to sit down to a nice meal first. Exactly how much of a poindexter is Beverly? Does Data earn that cover appearance? And does this book have the most badly botched meet cute of all time? All this and more in Loyalties, the book where the robot saves Dr. Wily!

Well, it only took ten Starfleet Academy books, but at last we finally get one focusing on a female cadet, harking back to the school days of one Beverly Crusher, or, of course, as she was known in those days, Beverly Howard. Beverly is a first-year medical cadet, natch, whose friend and roommate is Claire Voy, a character who, based on her name, should totally have psychic powers and somehow does not. Beverly spends a lot of time thinking about her grandmother back on Caldos1The book refers to the planet as Caldos IV, as do the script for “Sub Rosa” and Larry Nemecek’s Star Trek: The Next Generation Companion. Other sources, including StarTrek.com, call it Caldos II. In the face of conflicting Roman numerals, eschewing them entirely seems like the move here. and worrying about letting her down, which she is almost certain she will do when she and Claire get caught playing hooky to check out an archaeological dig on an old hospital in Old San Francisco. For the first major event of the book, this is surprisingly filler-ish, and really only serves to establish the gruffness of Commander Max Wiley, the instructor of their Medical Emergencies class.

After a light slap on the wrist from the dean of the medical college, Beverly and Claire go to their Medical Ethics class, where two cadets argue about the Prime Directive in a way that makes you wonder what that scene is doing there, then causes you to instantly answer your own question as you realize that the whole thing is conspicuous enough to presage that one of them is going to get up to something bad later. Later, as it turns out, is almost immediately. In their next class, Medical Emergencies, where cadets perform in holodeck simulations under the demanding eye of Commander Wiley, Beverly gets a small but worrisome jolt from her tricorder. But that’s nothing compared to poor Peter Peterson, who, in addition to enduring the indignity of being saddled with that name, suffers a seizure that puts him in the hospital. Commander Wiley blames Claire for the incident, insisting that she must have done something wrong.

Determined to clear Claire’s name, Beverly seeks all the help she can think of, including her other classmates; Admiral Muti, the aforementioned medical college dean; a friend of Claire’s named Mrs. Oner, a powerful touch-empath who runs a restaurant just off the Academy grounds; and even a friendly second-year by the name of Cadet Data. (Strangely, however, no Boothby in evidence here.) But as she digs deeper and gets closer to the truth, she begins to realize it probably isn’t her prime suspect, Commander Wiley. He may be strict and kind of mean, but he loves Starfleet too much to throw his career away killing cadets in sabotaged simulations. So then who could it be…?

Loyalties is the first of two Star Trek novels, both in the YA vein, brought to us by Patricia Barnes-Svarney, who, somewhat unusually for a Trek author, has significantly more non-fiction credits to her name. In the years prior to Loyalties, these include various articles in science magazines; during that time, she also worked as a geologist, astronomer, and oceanographer. In the years following Loyalties, she wrote a handful of Sabrina the Teenage Witch and Secret World of Alex Mack books for young readers, though what stands out most on her portfolio is the series of non-fiction Handy Answer Books written with her husband Thomas Svarney, nine in all from 2002 to 2018. In recent years, she appears to have gotten really into fiber art. Rather bravely, her personal phone number is posted in multiple places on her website, including right on the homepage.

Probably the best way to describe Loyalties is “quaint”, a word I do not intend as a compliment. Often, in speaking about the YA books, I’ve noted the tendency of the majority of them to favor straightforward action over heavier themes and bigger, more abstract ideas. Loyalties doesn’t traffic in the latter. No big deal. Most of the kid novels don’t. That’s not a knock against them. But if you aren’t going to go big in that direction, you should in the other. And Loyalties simply … doesn’t. Nothing even remotely exciting happens here. No setback feels like a crushing blow, and no victory feels like a significant step forward. Nothing feels urgent. One thing happens, and then another thing happens, and another, and suddenly it’s over.

It doesn’t help that young Beverly Howard is the least dynamic cadet we’ve seen in the Academy so far. Dr. Crusher isn’t exactly a character that electrifies my imagination in the best of times, but this is an especially unfortunate missed opportunity. This is the first girl we’ve seen head up a book in this series, and she’s both a timid worrywart and a giant dweeb. As evidence of the latter, Claire tries to persuade her to skip class by saying Kirk would do it, and Beverly literally tries to claim with a straight face that James T. Kirk would never skip a class. Beverly. Beverly. Did you even watch TOS? It’s a little astounding that an author with such a wide range of trades and interests could turn out such a beige story, but wonders never cease, I suppose.

Bad. Loyalties is dull as dishwater, lacking any kind of urgency and failing to capitalize on numerous interesting opportunities. For it to take this long to get a Starfleet Academy book with a female cadet and have it be such a snoozer is a real shame. If this book was a dish in Mrs. Oner’s kitchen, it would be unseasoned baked chicken. I’m almost in awe of how bland it is. At least the really awful books are memorable. This one can’t even muster that.

NEXT TIME: The spirits cry out for help in Ghost of a Chance